India and US – Rising Bonhomie 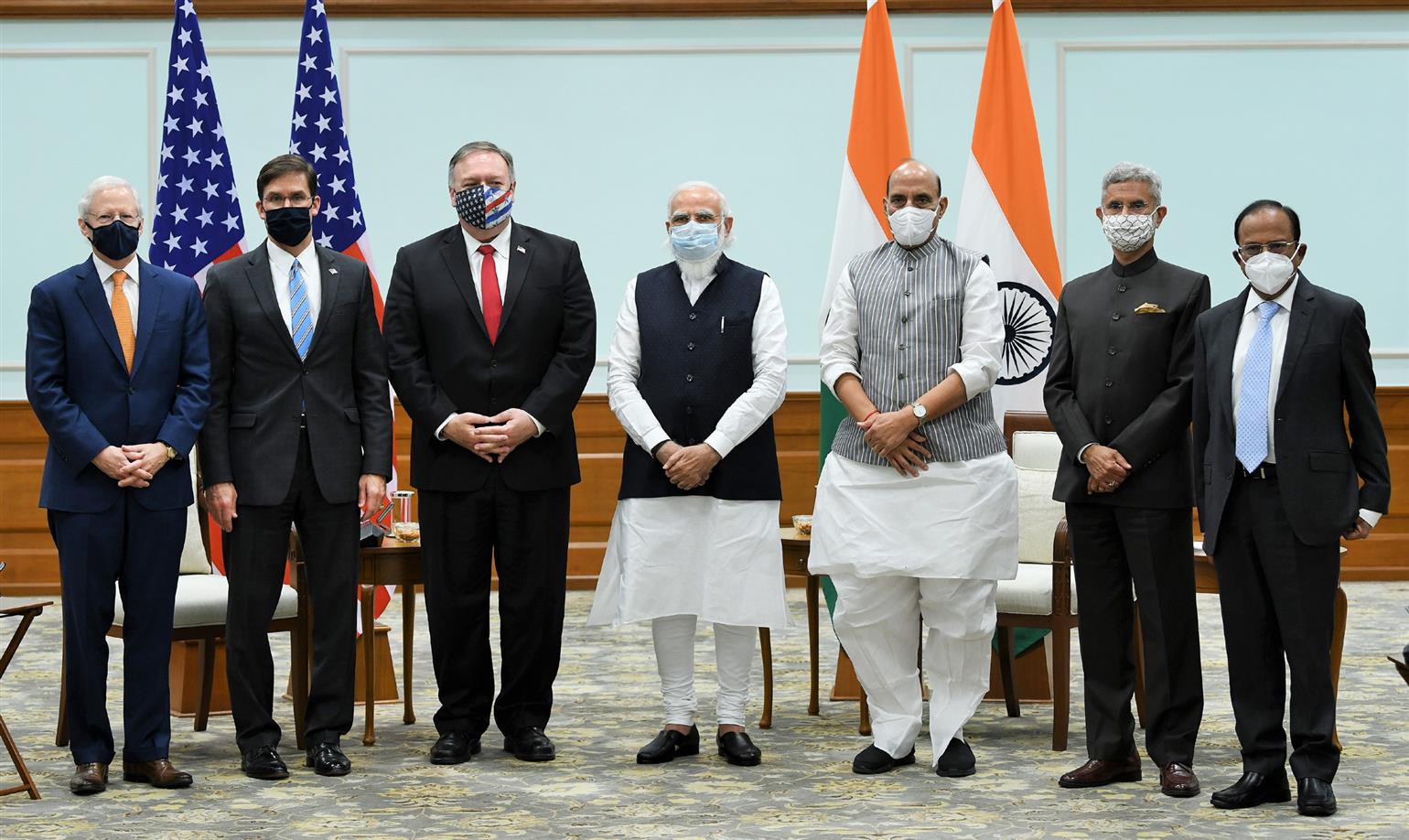 The just concluded Indo-US 2+2 Ministerial Dialogue was held in backdrop of an increasingly aggressive China who also caused a global pandemic by triggering the Wuhan virus that has claimed over one million lives. It initiated the aggression in Eastern Ladakh, with an arrogant Chinese regime and media indulging in virulent threats.  High point of the dialogue was inking of the Basic Exchange and Cooperation Agreement on Geospatial Cooperation (BECA) enabling sharing of satellite-topographical data to monitor Chinese naval activities including submarine deployments in the Indian Ocean that would benefit navigation and missile-targeting. BECA also gives our military access to US data base covering the Line of Actual Control and Chinese troop deployments, providing enhanced surveillance and greater accuracy to fly drones.

A bilateral technical agreement for maritime information-sharing was also reached and a decision taken to hold the inaugural Industrial Security Annex (ISA) summit later this year to further cement bilateral defence trade and technology cooperation. Though a range of global and regional issues were discussed, the overshadowing backdrop of China would have prevailed, even though the Indian side remained tongue-in-the-cheek about Beijing and avoided mentioning China during the press conference. However, the fact that dialogue was held close to the US presidential elections underlines the importance accorded by both sides for placing on record the growing convergence on key issues including due to China’s belligerence – to signal China earliest.

US Secretary of State Mike Pompeo called the 2+2 Ministerial Dialogue an important step in aligning “our democracies” against encroachment by Chinese authoritarianism. US Secretary of Defence Mark T Esper also directly named China at the press conference at the end of the dialogue, saying, “Based on our shared values and common interests, we stand shoulder to shoulder in support of a free and open Indo-Pacific for all, particularly in light of increasing aggression and destabilizing activities by China.”

Defence Minister Rajnath Singh said the two sides held comprehensive discussion on range of key issues, and called the inking of BECA with the US is a “significant move”. Noting that defence projects for joint development of equipment had been identified by the two sides, he said, “our military-to-military cooperation with the US is moving forward very well.” India can now procure long-range drones from the US. The two nations are looking to increase co-production and co-development of defense equipment. External Affairs Minister S Jaishankar said India-US national security convergences have grown and the Indo-Pacific was a focus of the discussion.

India and the US already have increased logistical support and maritime cooperation. Recently, a US Navy P-8 maritime patrol aircraft had landed at Port Blair, as also US Navy’s USS Nimitz aircraft carrier, on way to Western Pacific, conducted an exercise with the Indian Navy in the Indian Ocean. During 2019, Indian and US militaries had conducted the first tri-service exercise. India has established the Information Fusion Centre for the Indian Ocean Region (IFC-IOR) with a Liaison Officer (LO) from the US Navy while Indian Navy’s LO is positioned at NAVCENT, Bahrain.

It has been more than evident that lackadaisical attitude of successive US administrations enabled China to militarize the South and East China seas leading to the current situation. America recognized the direct challenge threat from China only in recent years. Even Quad meetings were erratic till November 2017, after which six-monthly meetings came into being.  Then was the ministerial-level Quad meet in September 2019 followed by the recent Quad meet in Tokyo on October 6, 2020, which may eventually lead to something more tangible. Australia joining the ‘Malabar’ naval exercise during November with India, Japan and US will add more teeth to the grouping.

Pompeo has stated that India and the US are force multipliers together and could provide “joint deterrence” against China’s aggression; both countries share a democratic vision in the face of the Chinese Communist Party’s tyranny. In a media interview after the 2+2 Dialogue, Mike Pompeo said, “The battle in the world … is between freedom and authoritarianism and India, like the US, has chosen democracy and freedom and sovereignty … the US is ready to do things it can do to help deliver  safety and security to the Indian people …. When it comes to the Chinese Communist Party, the entire world is the frontline…. This is a global challenge and the freedom-loving world must take it on together … Any time a nation shows weakness, you invite CCP aggression.”

Two things are relevant to Pompeo’s above statement. First, his last sentence is very true – that if a nation shows weakness, you invite rogue China to mount on your head. Second, is more relevant to the US in terms of its support. For example India-US counter terrorism cooperation has been there for years but when it came to providing access to David Coleman Haedley (key witness in 2008 Mumbai terrorist attacks) in US custody to Indian intelligence agencies, US backed out. As a result, India has recently asked Pakistan to prosecute Haedley, of which there is little chance. Such acts raise doubts about US sincerity. Some scholars feel that proceedings of this third Indo-US 2+2 Ministerial Dialogue have upset Chinese President Xi Jinping’s and he may resort to more mischief in the near future. This may or may not be directed at India but global tensions are surely building up, one indication being Russian President Vladimir Putin indicating he is not averse to a military pact with China.

Reacting to the 2+2 Dialogue, China’s state-owned media has said that the agreements could boost India’s military abilities and weapons accuracy but “there is absolutely no chance for India to reverse the reality of the military power gap between China and India, not to mention defeating China in possible military conflicts”. Talking of comparative military power, the CCP should see how Taiwan is standing up to Beijing, how China learned the lesson of its life in invading Vietnam in 1979, how PLA got a drubbing in Nathu La in 1967 and at Sumdorong Chu in mid 1980s and how many PLA were killed on night of June 15-16 this year in Galwan area in response to the dastardly attack planned by the CCP. The arrogant leadership in Beijing must also remember that India too is a nuclear state.

One thought on “India and US – Rising Bonhomie”