India and the US-China Great Game

Recently most of the flash points in the Western Pacific region witnessed activation, leading to belligerent posturing by China and its allies like North Korea; and the US and its allies, like Japan, South Korea and also its very strong potential ally, Vietnam.

The two most nightmarish scenarios in the region for the US and its allies are: a surprise nuclear attack by North Korea on South Korea, or on US allies / interests with tacit or direct support of China; and China’s seizure of Taiwan by a surprise amphibious assault. These two scenarios are in fact the key determinants of the geopolitical discourse in the East Asia region. In the ambit of this discourse are US, Taiwan, Japan, North Korea, South Korea and ASEAN countries. This ambit is now being enlarged to India and Pakistan as well due to Chinese thrust in the Indian Ocean.

“Strategic imperatives demand that India must put its weight behind any alliance, which negates Chinas inimical designs to its integrity and well-being. The evolving geopolitical discourse in East Asia is an opportunity for India to strategically encircle China by use of its maritime power. There is an opportunity to give China, the taste of its own medicine.”

The recent developments in this region are not isolated but are indicative of strategic rivalry between the two antagonistic groups, which is becoming bitter and intense with every passing day. While China adopts an aggressive posture on its land borders, its maritime assertiveness in the Western Pacific, which includes the South China Sea is being challenged by the affected powers, who are critically dependent on the ‘freedom of navigation’ in the seas that China claims to be its own.

The latest incident in September 2010 involving the seizure of a Chinese fishing trawler by a Japanese coast guard vessel in the waters of the disputed Senkaku island (called Diaoyutai island by the Chinese), has highlighted the mistrust, bitterness and strategic competition between Japan and China. Japan’s aggressive posturing and reaction was unmistakable and so was the Chinese reaction, which launched aggressive campaign through its netizens.

The fact that the Japanese held the Chinese Captain Zhan Quixiong in custody for 17 days, unsettled the Chinese. In retaliation, China arrested four Japanese employees of a construction company. Anti-Japan hysteria in China was drummed up by the Chinese authorities to the extent that the Chinese media reported that the Captain’s mother died because of her worry about the uncertainty of the life of her son. Beijing is convinced and concerned over the prospect of a belligerent Japan, which has been strategically restrained since World War-II by the US. 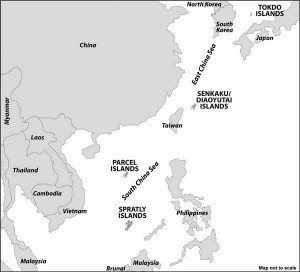 The Chinese also feel that Japan’s aggressive posturing on the issue was part of a larger strategic game being scripted by the US, as its comes in the wake of the recent standoff between the two countries over US-South Korea military exercises in the waters that China considers its sensitive backyard.Taiwan also despatched its coast guard vessels, ostensibly to protect one of its activists, but the real purpose was to register its claim on the Senkaku islands. These islands considered to be rich in gas deposits are under the control of Japanese, and are also claimed by China and Taiwan.

Significantly, some US officials have categorically stated that the US-Japan treaty applies to the Senkaku Islands as well. This is despite the fact that though the US recognizes the Japanese control of these islands, it has refrained from according recognition to Japan’s sovereignty over them. Commenting on the incident, the former US Dy Secretary of State, Richard Armitage said: “My view is, what China senses is a distracted United States, who has chilled relationship with Tokyo… So they are getting away with what they can get away with”.

The growing China-Japan standoff has a serious economic angle as well. China and Japan are the second and third economies of the world respectively. Japan is extremely disconcerted by the Chinese purchase of a large number of Yen dominated bonds, resulting in the currency being pushed to a 15 year high, thus making Japanese exports less competitive.

While Chinas status or possible status as a military and economic superpower can be debated, its current status of a “˜fishing superpower cannot be disputed.

The other issue, generally ignored, is the rivalry between China and other countries in the region, with regard to fishing rights in the surrounding waters and the high seas. While China’s status or possible status as a military and economic superpower can be debated, its current status of a ‘fishing superpower’ cannot be disputed. Its illegal fishing activities are an endemic cause of disputes with Japan, the US Navy, Vietnam, and even Indonesian coast guard and Thailand. As per one estimate, China’s annual catch of fish i.e. 17 million tonne is four times that of its nearest competitor and far greater than that of Japan. China has an estimated 3,00,000 motorized fishing trawlers.