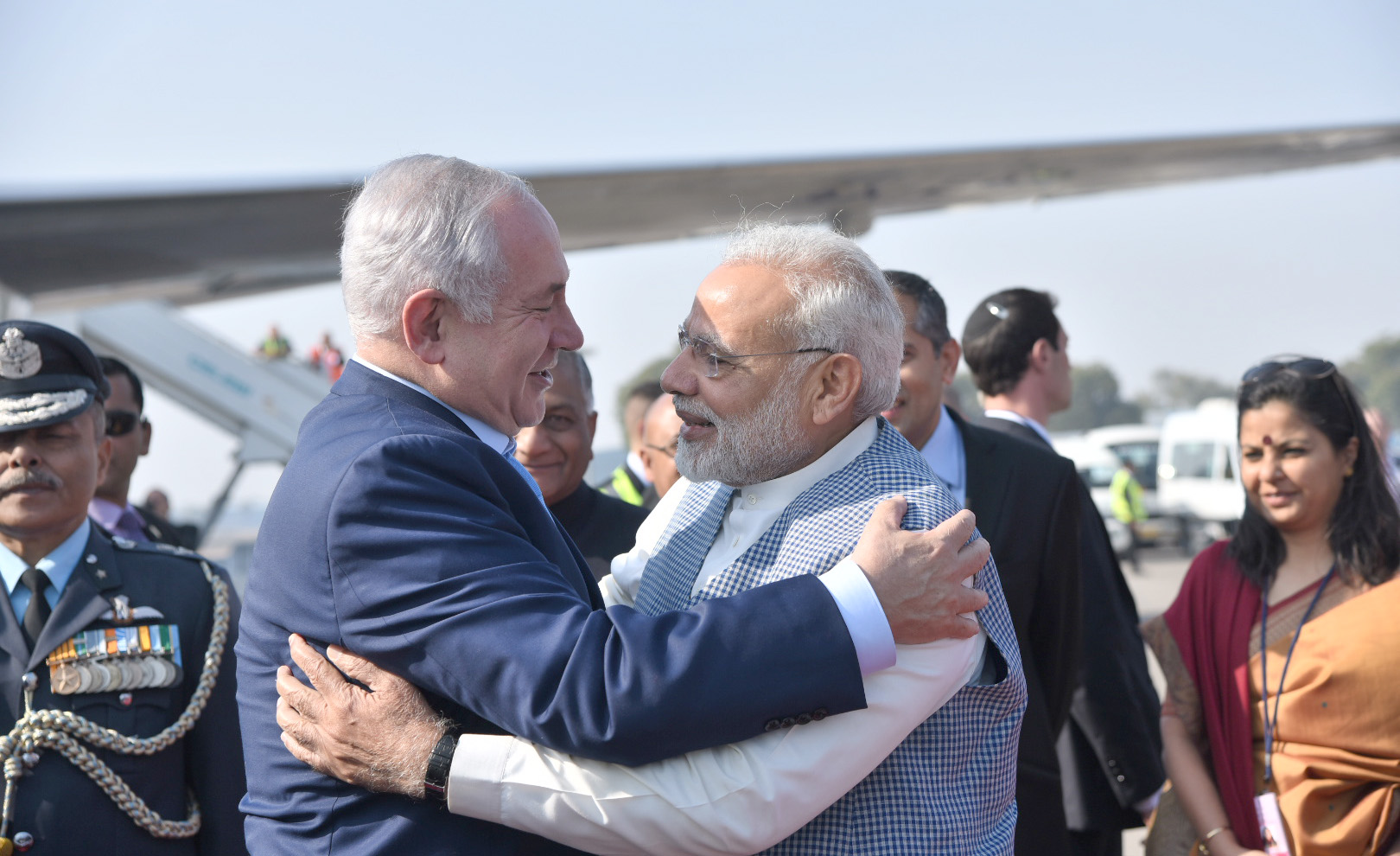 The ongoing return visit of the Israeli Prime Minister Netanyahu to India in response to the visit of Indian Premier Narendra Modi to Israel in July 2017 has cemented the relationship between the two countries to such an extent that it has sent shivers across the borders on both the flanks.  India and Israel, though geographically distant, are closest strategically. Both attained independence from the British almost at the same time and Israel’s creation at that time was viewed by many idealists in India as based on religion like the partition of the sub-continent. But the realists opposed this and felt that Israel is much more than just another nation and considered it an anti-thesis to pan-Islamic ideology that was gaining ground in early twentieth century. During the Cold war era, the two nations chartered different courses. While Israel embraced the United States and closer ties with west European nations, India under Nehru championed the Non-Aligned Movement (NAM) and veered closer towards the Soviet Union. India’s dependence on the Arab World for meeting its hydrocarbon needs and her large Muslim population was another major obstacle to building a relationship with Israel, as India feared that close relations with the Jewish State might somehow radicalize its Muslim citizens – numbering more than 100 million – and hurt its relations with the Arab world.

India formally recognised Israel in 1950 but the relations between the countries remained informal for most of the period till the collapse of Soviet Union and end of the Cold War. India and Israel established formal diplomatic ties only in 1992.  It was the BJP convention in October 1991 that had called for establishing full diplomatic relations with the Jewish State. BJP has always admired Israel for its pride in nationalism and respect for the military. The visit of Israeli premier to India will also mark the culmination of year-long celebrations that commenced in January last year to celebrate 25 years of establishment of formal diplomatic relations. During the intervening period though we did not enjoy formal relations Israel was always there to help India in the hours of national crisis starting from Sino-Indian War of 1962 and both the wars with Pakistan in 1965 and 1971. Israel’s contribution during the Kargil War despite international pressure sowed the seeds of trust between the two nations and Israel emerged as the only true all weather friend of India.

This trust later transformed into long lasting bond. Since then, both countries have benefitted immensely and India has become the largest trading partner of Israel. Emergence of terrorism as a threat and Pak sponsored proxy war brought the two nations even closer but the domestic vote-bank politics prevented the UPA 1 and 2 to openly embrace Israel. India-Israel cooperation increased dramatically in 2014 since the rise of power to Modi led NDA government in New Delhi. Despite sharing 25 years of diplomatic ties and working closely on defence, counter terrorism, agriculture and high end technology, no Indian Prime Minister had visited Israel.

The trend was broken by Narendra Modi whose maiden visit in July 2017 chartered a new course in Indo-Israeli ties making them inseparable friends.  The commonalities between the two nations namely hostile neighbours, cross border terrorism and targets of global Islamic terror dictate the “convergence of congruent interests” leading to deepening of mutual relations that would bring dividends to both the nations. The former Israeli Ambassador to India AlonUshpiz while remitting office summed up the relationship with India as one in which “two intimate partners who trust each other start thinking of challenges together and solutions together and what follows together.”

The relations between the two are governed more by pragmatism than by ideology, each side understanding each other’s needs and compulsions. India does not want to distant itself from the Palestinian cause and Israel does not allow the bilateral relationship to be imperilled by India’s condemnation of Israeli actions in Gaza or West Coast. Realpolitik determine that India has been poorly compensated for supporting Palestine. The Arab-world has failed to reign in Pakistan from fomenting trouble in Kashmir and sponsoring cross-border terrorism in India. India, however, desires to maintain good relationship with the Muslim countries despite Pakistan blocking India’s entry into the Organisation of Islamic Countries (OIC). India today enjoys friendly relations with the Gulf countries, Iran as well as Saudi Arabia and yet continues to foster better and stronger relations with Israel.

Radical Islamic Terrorism is the most potent common threat faced by the two nations. The shared experience of terrorism and threats from organisations with similar radical ideology like Al Qaeda, ISIS, LeT, JeM, HM and Hamas committed to kill, kidnap and terrorize civilians has accelerated the rapid pace of growing bonhomie between the two nations. Not many would know that during the Kargil War, Israel helped India to build strategy against intruders. It speeded up the shipment of ordered arms, delivered UAVs and shared photographs from its military satellites.

India’s war against terror has guided new affinities and forged different strategic relationships as compared to anti-colonial rhetoric of Nehru era. Under Modi’s leadership, India has embarked on the path of fostering everlasting friendship with Israel as India marches towards a terror free New India by 2022. Our counter-terrorism cooperation involves exchange of information on terrorist groups, their financial network, recruitment patterns, training and operations including sharing and comparing of national doctrines, operational experiences, intelligence and joint anti-insurgency training.

Israel’s contribution in enhancing our border security is also significant and noteworthy.The Indian military deployed an Israeli-developed comprehensive integrated border management system (CIBMS) along its border with Pakistan in August 2017.  The fence will be monitored by sensors and security cameras, and will alert people in monitoring facilities when a breach has occurred.  India plans to seal all of her 6,300km borders with Pakistan and Bangladesh with the Israeli smart-fence.   Israel has sold India motion detectors and other monitoring and surveillance equipment to counter Pak supported infiltration as well as tunnel-detecting equipment.

The Israeli built UAVs for high-altitude surveillance have proved as force-multipliers.  Israel today is the second largest arm exporter to India next to Russia. Indo-Israeli friendship is not confined to defence or border security only but also extends to other domains like agriculture, water utilization solutions, drought farming, solar energy, space and technology, cyber security. India is Israel’s tenth-largest trade partner and import source and seventh largest export source. Lot of Israelis visit India as tourists and Israel is also becoming a fast growing popular tourist destination among Indians. Israeli entrepreneurs have shown active interest in many of India’s flagship programme like ‘make in India’ in defence sector and proposed investment in joint production of defence weaponry, river cleaning and sewage as part of ‘Swatch Bharat.’

During his first meeting on September 28, 2014 at New York with Israeli Prime Minister Netanyahu, the Indian Prime Minister Narendra Modi acknowledged that Israel and India have a historic working relationship and stated that India is “the only country where antisemitism has never been allowed to come up, where Jews have never suffered and lived as an integral part of our society”.  Netanyahu invited Modi to Israel for a visit where he received Modi with exceptional warmth and stated “sky is the limit” as far as Indo-Israeli cooperation is concerned.Number of bilateral agreements signed during the visit cemented the two countries as strategic partners. Concluding his visit, Modi bid farewell to the people of Israel via a Twitter post in Hebrew and English that read “I thank the people and Government of Israel for their hospitality. This successful visit will add more energy to India-Israel relations.”  Israeli Prime Minister Netanyahu posted a message on Twitter in Hindi as well.

Modi reciprocated with an unprecedented welcome to Benjamin Netanyahu during his ongoing maiden visit to India. Apart from signing nine memorandum at government level, Netanyahu has been interacting with Indian businessmen for joint ventures and investments. He has a reason to smile on a very successful visit so far.  “Indo-Israeli partnership has reached unprecedented heights; this is the beginning of a wonderful friendship and possibilities are boundless. India and Israel are democracies, share a love for freedom; we are a match made in heaven,” said the Israeli Prime Minister while addressing a business summit in Mumbai.“We are trying to develop Israel with the changing times and for that we wish to collaborate with our old friend India,” wished Netanyahu. India can boast of her friendship with Israel as inseparable and without any barriers.