Admiral Edouard Guillaud, Chief of Defence Staff, France in a press conference at New Delhi said that his first assessment is that the world is currently undergoing a tremendous change, at a fast pace. 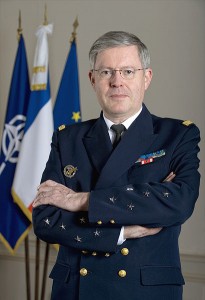 These factors were taken into account to define our defence policy which is based on a few major orientations:

–  The preservation of our national independence. France must be free to decide on its own fate. This is what we call strategic autonomy.

–  The development of a shared European strategic ambition, alongside our transatlantic link. It’s a real challenge! We cannot, we must not escape it!

–  The adaptation of our defence and national security to those new threats and of course, compliance with our international obligations.

–  Last but not least, promotion of world governance. We have always stated that unilateral use of force is the shortest way to fail. Obtaining a UN resolution is the rule. This is why we plead for a reform of the UN Security Council in order to strengthen its legitimacy. For the very same reason, we strongly support the admission of India as a permanent member of the UN Security Council.

Our Defence and National Security strategy is therefore based on five major strategic functions which guarantee our strategic autonomy:

In this context, India and France face common challenges.

The first one is the Indian Ocean.

This ocean has always been of strategic value.

It is the third largest ocean in the world connecting Africa, Asia, Oceania and the Antarctic, at the crossroads of three major strategic routes through Bab El Mandeb, Ormuz and Malacca.

Second, it has an economic value.

Half of the world’s maritime trade -including about 20% of the world’s energetic resourcestransits through the Indian Ocean. About 40% of the off-shore oil production is extracted in the area.

Contrary to the Atlantic or to the Pacific, more than three quarters of the commercial traffic transiting through the Indian Ocean are generated by non-regional countries.