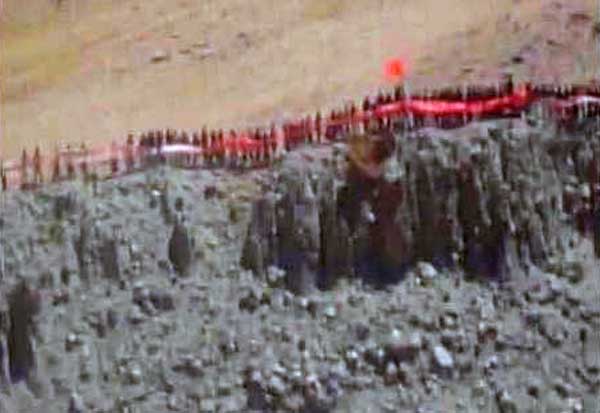 Chinese President Xi Jinping’s visit to India 17-19 September 2014 was overshadowed by the serious standoff between the Indian and Chinese armed forces along the Line of Actual Control (LAC) in Ladakh’s Chumar and Damchok region.

Army Chief Gen Dalbir Singh Suhag briefed the prime minister on the border situation on 17 September whereas Director General of Military Operations Lt Gen P R Kumar had a detailed discussion with National Security Adviser Ajit Doval, exploring ways to de-escalate the tension. Modi expressed India’s “serious concerns over repeated incidents along the border” during his meetings with Xi both in Ahmedabad and in New Delhi.

Ongoing talks on settling the border have not been given the priority and urgency it deserves.

An intrusion of nearly 1,000 Chinese soldiers into the Indian side of the LAC prompted India to rush three battalions to the border. While the troops did not clash, tensions spiraled and could have easily derailed Xi’s visit had good sense not prevailed on both sides. This should serve as a reminder to both the countries that settling the border dispute cannot be put off or ignored any longer. India and China acted wisely decades ago in putting their border dispute aside for some time, even as they focused on co-operation in other areas for taking up confidence building measures.

The logic behind this approach was that economic and other ties would help build trust and thus facilitate a compromise settlement of the border. Ongoing talks on settling the border have not been given the priority and urgency it deserves. In the circumstances, the border dispute has hung like a sword of Damocles over bilateral relations between the two countries, triggering accusations and counter-accusations over alleged intrusions and erupting in serious clashes periodically. The two sides have now agreed to find an early solution to the border issues as a “strategic objective” and to seek a “fair, reasonable and mutually acceptable solution,” under Border Defence Cooperation Agreement (BDCA) of April 2005.

The two sides pledged to initiate talks on civilian nuclear co-operation, marking a shift from China’s position hitherto of not engaging in talks with India on nuclear-related issues. China also reiterated support for India’s full membership in the Shanghai Cooperation Organisation. Xi’s visit was therefore a fruitful one.

The joint statement issued at the end of the Chinese President’s visit on 18 September took note of India’s concern over growing imbalance in its trade with China. Xi assured Modi of taking “positive steps” to rebalance bilateral trade and address existing structural imbalances in commercial relations between the two countries.

A political settlement to the border dispute through empowered Special Representatives must be put on top of the bilateral agenda.

However, these gains are ephemeral as they could melt quickly should the border dispute turn nasty. This is the lesson that India and China must draw from the dark clouds of possible clashes that hung over Xi’s visit. Both sides expressed commitment to settling the border through friendly consultations. But such rhetoric has been heard before. What we need now is concrete and time-bound action to settle the border. Xi did point to bilateral mechanisms in place to ensure tensions don’t escalate.

But putting a lid on tensions is not enough any longer. The underlying conflict needs to be resolved. A political settlement to the border dispute through empowered Special Representatives must be put on top of the bilateral agenda.

Prime Minister Narendra Modi turned down Chinese President Xi Jinping’s request to re-assert New Delhi’s commitment to “One-China policy” and shut down the Tibetan Government-in-Exile based in India. Modi dug his heels in after Xi declined to make any commitment on India’s request to change Beijing’s policy of issuing “stapled visas” to citizens of Arunachal Pradesh and Jammu and Kashmir. Modi also turned down Xi’s request to restrict the activities of the Dalai Lama, whose advice to China to learn from India’s democracy was aired by TV channels.

Xi concluded his visit to New Delhi on 19 September and returned to Beijing without making any commitment to Modi’s call for early resumption of the joint efforts to narrow down perceptional differences over alignment of the Line of Actual Control (LAC).

A joint statement issued at the end of the Chinese president’s three-day visit to India, however, reiterated the commitment of India and China to seek a “fair, reasonable and mutually acceptable” solution to the boundary dispute in the “overall interests of the bilateral relations”. The joint statement on Building a Closer Developmental Partnership between India and China recalled the agreement on the political parameters and guiding principles for the settlement of the boundary question signed in April 2005. Modi and Xi also agreed that an early settlement of the boundary dispute would “advance basic interests of the two countries” and should, therefore, be “pursued as a strategic objective.”

The sudden transfer of Chinese Ambassador in New Delhi, Mr Wei Wei just a few days before the visit indicates that something was not right, what it is will come to light in the days ahead.

Repeated undermining of Indian sensitivities on the LAC by the Chinese is likely to result in more delays in building trust. On the flip side it will push India closer to embrace United States and Japan. With Mr. Modi going to Washington in a week or so, Chinese machismo on the LAC is likely to backfire.

While Mr. Modi has his own personal style of diplomacy spending a whole day with the Chinese President to build rapport may be seen by many in the diplomatic community of today which prefers crisp, businesslike approach as wasteful. Just as the Indian Prime Minister spend five days on the Japan visit dividends may not have been worth the effort and a more compact yet effective style may be more effective in the future.

The sudden transfer of Chinese Ambassador in New Delhi, Mr Wei Wei just a few days before the visit indicates that something was not right, what it is will come to light in the days ahead. While this has not received the media attention that followed resignation by Ms Nancy Powell, the background to the same could be similar, disapproval from the HQs. The present incumbent Le Yucheng, a Central Asia and Russia specialist has his work cut out.

Issues that Le Yucheng will have to deal with will include apart from boundary relations where the Foreign Ministry is seen by many as a mute spectator with People’s Liberation Army (PLA) calling the shot, adverse trade balance, DE hyphenating status of Arunachal Pradesh, pump priming investments and projects announced during the President’s visit will take up his time.

Standing while running in some ways is good progress in India China relations rather than one-step forward two back, the normal course of India Pakistan relations.