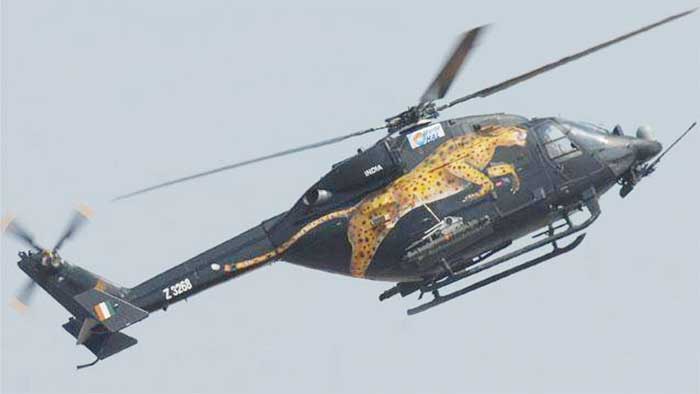 In an article titled ‘A Proxy War Between India and Pakistan Is Underway In Afghanistan’ in Forbes, Charles Tiefler writes that the US command in Afghanistan has asked India to step up military aid to Afghan forces. He goes on to say that while “India provided four attack helicopters to the Afghan national Army (ANA) last year, the Afghans want more, as well as spare parts for Russian-made military equipment, to be used in part against the Islamist network built up by Pakistan called the Haqqanis”.

Whether Tifler wrote this by design or default is ambiguous but if India were to fight Pakistan’s proxy war, it would be on Pakistani soil and not Afghan territory anyway, latter being a strategic partner of India.

The hilarious part is Tiefler describing this further by saying, “Every aspect of this cries: Proxy War”.

Now if giving military aid of four attack helicopters and spare parts for military equipment constitutes ‘proxy war’ then all the countries providing military aid to others could be accused of ‘proxy war’, altering the definition of the term altogether. Whether Tifler wrote this by design or default is ambiguous but if India were to fight Pakistan’s proxy war, it would be on Pakistani soil and not Afghan territory anyway, latter being a strategic partner of India.

The Afghan’s have been lamenting past several years that while the launch of GWOT was tom-tommed with much aplomb and Afghanistan invaded by the US, the roots of terror in Pakistan were permitted to stay intact other than some predator attacks inside Pakistan. Pakistan has consistently defied targeting the Haqqani network despite the US asking them to do so.

Michael Hughes had written six years back, “The Haqqani Network is Al Qaeda. Pakistan has had a close relationship with the Haqqanis for over 30 years, who are still seen as a crucial anti-Indian asset. So, for nine years the Pakistanis protected the Haqqanis and claimed ignorance as to the whereabouts of Mullah Omar, Osama bin Laden and the Quetta Shura. Nine years, nearly $300 billion dollars and 1900 dead coalition soldiers later, the US has officially verified that the entire war effort has been focused on the wrong side of the mountains.”

Talking of proxy war on Afghan soil, Chris Sands wrote in Global Post, Kabul on February 20, 2013 saying, “The nightmare scenario of NATO leaving Afghanistan to face a new period of ethnic violence and civil conflict has already become a reality in the southern province of Uruzgan. There a militia commanded by a man named Abdul Hakim Shujaee is accused of deliberately destroying houses, raping women and murdering dozens of civilians. The government has ordered his arrest, but he remains free. Haji Obaidullah Barakzai, a member of parliament for Uruzgan, claimed Shujaee has been operating with backing from American Special Forces for about three years.

In previous statements to the media, the US has denied this claim.

Little is known about Shujaee, other than the fact he is an ethnic Hazara and the overwhelming majority of his victims are Pashtuns. He’s from Ghazni province but most of his alleged crimes have occurred in the Khas Uruzgan district of Uruzgan”. If this is true then is accelerating ethnic strife part of the strategy for the ‘Great Game in Afghanistan? And now you witness Pakistan systematically targeting Hazaras in Afghanistan, again aimed at aggravating the ethnic polarization in Afghanistan. Yet there appears to be no US pressure on Pakistan to stop such deliberate actions.

US State Department Deputy Spokesman Mark Toner has recently asked Pakistan to act against terror groups targeting its neighbours and not just the ones that pose a threat to it, alleging Pakistan was going after terror groups ‘selectively’. But is this enough especially when the recent report by the UN Assistance Mission Afghanistan (UNAMA) released in July 2016 states that the Lashkar-e-Taiba (LeT) and Jaish-i-Mohammed (JeM) too are operating in Afghanistan. More significantly, Afghanistan has officially told Pakistan that Hafiz Saeed, former LeT chief is directing ISIS operations in  Afghanistan.

The Afghans want to increase the tenure of the ANA soldier from three years to ten but can’t afford to do so because there is no long-term commitment for financial support to maintain the ANA.

Sure General John Nicholson, US commander in Afghanistan has asked India to give more military aid to Afghanistan and also has been appreciative of the military training India has been providing to the ANA. Last month, General Nicholson said in an Associated Press interview at his headquarters in Kabul, “Armies win on the offense ……The ability to help the Afghan security forces when they are on the offense is really where we want to be, because when they have the initiative, when they are on the offense, when they are taking the fight to the enemy, that’s how they’re going to be successful.” This sounds good considering that when the US Special Forces (USSF) were rearing to help the ANA in retaking Kunduz and were repeatedly seeking permission from higher commanders, no response came to them, there has been some focus in Helmand region after US forces had completely pulled out from there.

Nicholson’s call for building up the Afghan Air Force is good news also but adequate focus on the cutting edge is still missing. It is well known that building up the ANA commenced after the US announcement of pullout in 2009. The strength of ANA was to be built up to 3,50,000 but has never achieved that number; in April 2015, it had reportedly gone down to as low as 1,40,000.

The Afghans want to increase the tenure of the ANA soldier from three years to ten but can’t afford to do so because there is no long-term commitment for financial support to maintain the ANA. Last month’s NATO commitment at the NATO summit at Warsaw to extend financial support till 2020 again meets short-term requirements only. Three year tenure for the ANA soldier implies some 30% of ANA gets turned over every year, which automatically is recipe for poor training. In addition there are large scale desertions,  sometimes with personal weapon, since the soldier is unsure of his fate after his three year term ends. This is a serious issue that continues to be neglected.

Afghanistan’s unemployment rate is around 40% including about 1.8 million eligible workers unemployed as reported by the Afghan Ministry of Labor and Social Welfare in October 2015. 10 year tenure for the ANA soldier would ensure adequate training and operational skills. There was time when South Korea was as poor as Afghanistan but over 65 years of international commitment and military presence has transformed it into a prosperous and strong nation.

Additionally, only bringing up the Afghan Air Force will not suffice since the US Department of Defense Report to Congress of June 2016 titled ‘Enhancing Security and Stability in Afghanistan’ amongst other things says that the ANSF often have: reactionary strategy; force allocation and posture limitations; persistent capability gaps in aviation, combined arms integration, intelligence collection and dissemination, and sustainment – hampering improve ability to maintain security and stability.

Definitely we must provide as much military aid to Afghanistan as possible, ‘Political & Security Cooperation’ being one of the pillars of the India Afghanistan Strategic Partnership Agreement 2011. However, General Nicholson’s call for India to provide more military aid to Afghanistan appears to be getting interpreted by some in India for putting boots on ground even if this entails and establishing a circuitous logistics chain avoiding Pakistan. Sure we can put troops anywhere if our national interest so demand but the question is has the Afghan Government made such a request? Besides, what would be the task of such a force, what quantum, at what costs and is this to compensate for other foreign troops?

We must also acknowledge that the Great Game in Afghanistan is being played at the sub-conventional level and will continue to be so. However, tackling Pakistan through a hybrid sandwich is another issue altogether.