Imran's exit will have no Implications on India 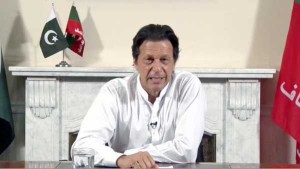 The street power of political parties including radical Islamist ones like the JuH (F) is in full display in Pakistan. It is indeed a glimpse of political dynamics in Pakistan. Imran should not resent this because he too was impelled by the military to the post of the PM through street power, scripted and engineered by the military. The religious, ethnic and sectarian lines in Pakistan politics brooks no transcendence of these lines. Punjab has been Sharif’s family stronghold for very long time. It was indeed impossible for Imran Khan to breach the bastion. The military then politically weaponised the Barelvi Sunni Muslims, which was Nawaz Sharif’s bulwark. Majority of Pakistanis are Barelvi Muslims, who are wedded to the tradition of peers and dargahs, an anathema to Deoband sect of Islam.

The Barelvis were considered relatively moderate till recently. The process of their radicalisation began with the killing of Salman Taseer, the governor of Punjab by his bodyguard, Mumtaz Qadri, who was subsequently hanged. Qadri had killed him as he felt that Tasser had committed blasphemy by questioning the draconian religious blasphemy laws in Pakistan. Nevertheless, his grave has become a pilgrimage center for Barelvis and a powerful psychological tool for radicalisation. Ever since the Barelvis have been in the forefront in the gruesome anti-blasphemy campaigns in Pakistan. These are the attributes of Barelvis that Pakistan military exploited and consequently embraced their organization Tehreek-e-Labaik (TLP). The TLP has now gravitated to politics at the behest of the military and now is considered the politico-religious arm of the military, a position which the JeI enjoyed for very long and is considered to be the mother of all Islamic terrorist organizations.

Now that Imran is being shown the door by the military, he has no moral right to complain, because he did nothing to strengthen democracy in Pakistan. He colluded with the military in marginalising PML (N) and the PPP. He was instrumental in hounding Nawaz Sharif out of the country. For a long period JUI (F) leader and cleric Fazlur Rehman was his favorite political bedfellow.

Between 2008 and 2018, he never supported the 18th Amendment. As per this amendment passed in the National Assembly in 2010, the President’s power to dissolve the Parliament was removed. The amendment was in a way a legislation to do away with the vestiges of military dictatorship under the garb of Presidential powers acquired by Ziaul Haq and Pervez Musharraf. Importantly, as per the amendment North West Frontier Province (NWFP) was renamed Khyber Pakthtunkhwa (KP).

As per TOI report today..A teacher in all girls school at Pakistan school in Dera Ismail Khan was killed by her girl students for alleged blasphemy against Prophet. These students were led and motivated by another lady teacher..Blasphemy in Pakistan is one issue that galvanises Pakistan but so far was a phenomenon confined men only. A society wherein woman too turn into such beasts is worse than Quran’s description of hell. Probably these faiths have survived because of the terror factor, otherwise they would have dissolved long long ago. Terror and majhab can be complementary, but terror and spiritualism are antagonistic.

This is the level of radicalisation that Pakistan has acquired during Imran’s regime, even women have been jihadised. Imran has been liberally funding the jihadi producing madrassas and seminaries in Pakistan specially Darul Uloom Haqqania, a seminary run by JUI-S chief Saimul Haq. It is known by various epithets such as ‘nursery of jihad’ and ‘Oxford of Jihad’. This is the seminary wherein the plan to assassinate Benazir was hatched. In 2016 Imran had justified the liberal funding worth $ 2.8 mn of the seminary by the KP government on the plea that Haqqania has network of madrasas that provides education to 2.5 million children, who otherwise cannot afford private schools.

In 2013 elections Imran made full use of Taliban by unleashing it to disrupt political rallies of Pakistan’s People Party (PPP) and Awami National Party (ANP).

In his address to the nation Imran invoked democracy and terrorism. Both these issues have been bane for Pakistan. Imran’s track record has been dismal on both the measures.

In the eventful decade of the 80s, wherein Pakistan’s jihadism was internationally weaponised, it never acquired the levels of ‘suicide bombings’, and wesponisation of women was unimaginable. Pakistan nurtured these jihadis attributes as a reaction to unthinkable recoil from India.

So when Imran lamented about US drone attacks against Pakistanis, however he seemed to condone drone activity against India by the military sponsored jihadi groups. While Imran’s heart bled for jihadis employed in Afghanistan, he expressed no remorse for their depredations on India, because keeping the Kashmir issue alive is singularly critical for existence of Pak Military, the Prime Minister, and the country …in that order.

Imran also talked of the foreign hand. He was indeed correct. The reality about Pakistan is that whenever there is a regime change it for geopolitical reasons, effected by invisible foreign hand and Pak military. This is followed by a honeymoon period of Military and PM. Then international and economic exigencies start weighing heavily on the PM. The PM then tries to chart a geopolitical course independent of the military. He tries to consolidate his power. That is when the military strikes at the PM at the behest of foreign powers. It happened with Liaqat Ali Khan, then Ayub Khan, then Yahya Khan, ZA Bhutto, Nawaz Sharif and Bebazir Bhutto. Four of them were killed or assassinated. The same is happening with Imran.

For sometime now it has been apparent that the honeymoon between Imran and Military is over. The strain in the relationship became acute when Imran tried to assert his preference for Lt Gen Faiz Hameed over Army Chief Bajwa’s choice Lt Gen Nadeem Anjum. It is widely believed that Hameed played a substantial role in creating the political path for ascendancy of Imran to prime ministership. Nawaz Sharif believes that it is Hameed who fabricated the corruption charges against him. Also, on many occasions Imran publicly touted support of the military, thus trying to institutionalise the invisible arrangement. This was very deeply resented by the military, as a deliberate ploy.

Recently Bill Gates had visited Pakistan. Nearly a dozen Pak officials had a meeting with him. Amongst them was the Pakistan ISI chief, Nadeem Anjum. Photo of the meeting with one morphed figure, suggesting the presence of the ISI Chief was leaked was leaked. The Military construed it as inspired leak. So for Imran to say that his ouster bid is being manipulated by the US is not correct. Had that been the case, the Chinese would be geopolitically most gratified. The actual reason runs much deeper.

When Imran implies that he is victim of American conspiracy because of his position on Russo-Ukraine conflict,  in favour of Russia it does not appear credulous because the process of decimating Imran had begun much earlier by the military.

What seems to be the final provocation on part of Imran is the granting of gold mining rights in Balochistan to a Canadian firm Barrick Gold Corporation. It is the largest gold mining project in the world. Know as the Reko Diq project, it going to attract an investment of nearly $ 12bn, and create 8000 jobs. This project engenders western presence in the most sensitive region of China Pakistan Economic Corridor Project (CPEC). It constitutes a direct challenge to Chinese strategic interests in Pakistan. The head of Jamiat e Islami (JeI) in Balochistan, Maulana Hidaytur Rehman is opposing the project tooth and nail. Importantly the JeI had signed a secret MoU with China at the same time as Rahul Gandhi did in the overbearing shadow of his mother.

Imran’s exit will have no implications on India because the military is in direct control of India policy.