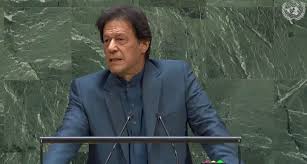 Since an occasional slip of the tongue is unavoidable, such inadvertent mistakes don’t usually stir up a controversy as long the mistake is corrected immediately. But rather than clearing the air, when such an amendment ends up creating more confusion, then to perceive it as a ‘Freudian slip’ is but natural. Readers would be aware that this term denotes a verbal or memory mistake believed to be linked to the unconscious mind that supposedly reveals the real secret thoughts and feelings people hold. This is exactly what happened when Pakistan Prime Minister Imran Khan, after initially saying that Al Qaida founder Osama bin Laden (OBL) had been “killed” by US troops but then immediately corrected himself by saying that the World Trade Center attack mastermind had been “martyred.”

Though a humungous faux pas, the same could still have been overlooked had it been made during an, interview, media event or an informal address (like his remark of Germany and Japan being neighbours and having fought against each other during World War II). Yet to declare OBL a martyr on the floor of the National Assembly makes it all the more embarrassing for Pakistan, and that too at a time when it’s desperately trying to convince terror financing watchdog Financial Action Task Force (FATF) that it has no appetite for terrorists or terrorism. But this isn’t the first time Khan has betrayed Pakistan’s eternal love for terrorist groups-while speaking at the US Institute of Peace in Washington during last July, didn’t he himself admit that “when you talk about militant groups, we still have about 30,000 to 40,000 armed people who have been trained and fought in some part of Afghanistan or Kashmir”?

Khan waxes eloquent on his government’s ‘zero tolerance’ for terrorism and keeps blaming previous governments, which (according to him), “did not have the political will,” to tackle terrorism due to which Pakistan is plagued with the current crisis and stands placed in the FATF ‘grey-list’ for financing terrorism. But would Mr Khan please elucidate that when (again according to him) his government and the army are “on the same page,” why haven’t the “30,000 to 40,000 “militants” who are moving freely on Pakistani soil been disarmed as yet? Don’t these “armed people” pose a threat to the people of Pakistan? Or is Rawalpindi dead certain that unlike Former US Secretary of State Hillary Clinton prognosis, the “snakes” that it’s keeping in its backyard will only bite Pakistan’s neighbours? Lastly, if Pakistan is really serious about tackling terrorism, then how come it has the third highest number of people (146) on the UNSC proscribed list?

The fact that the Al Qaida founder considered Pakistan as the safest place on earth where he could live incognito along with his large two dozen strong member family and attendants; then opt to stay in an Abbottabad compound barely a stone’s throw from Pakistan Military Academy clearly indicates that OBL was being hosted by Pakistan’s deep state. Furthermore, Washington’s decision not to either inform Islamabad or Rawalpindi about the plan to takeout OBL or incorporate Pakistan army in conduct of ‘Operation Geronimo’ leaves no doubt that Pentagon was absolutely certain about Rawalpindi’s complicity in providing a safe sanctuary to the Al Qaida chief. Surprisingly, this was the issue that Khan raked up during his speech in the NA and one must admire his gall for portraying the Americans as the ‘bad guys’.

For Khan, it wasn’t OBL being found holed up safely in Pakistan that “embarrassed” Pakistan- it was only when “the Americans came and killed Osama bin Laden at Abbottabad… martyred him, the whole world started abusing us after that.” In cricket, ‘reverse swing’ is the art of so delivering a ball that it turns in towards the batsman, rather than moving away from him, thereby limiting the batsman’s shot-making ability due to lack of momentum and the former cricketer turned PM’s ‘reverse swing’ delivery came moments later when he claimed that “70,000 Pakistanis died because of US’s war on terror.” This is the second Freudian slip which confirms that Khan has no doubt whatsoever that ‘Uncle Sam’ is the real villain and that OBL wasn’t killed but “martyred” by Americans. It’s this mindset that earned him the ‘Taliban Khan’ moniker. Readers would recall that before he became Prime Minister, Khan’s great fascination with terrorist groups was well known. He was the one who in 2013, described the US ‘droning’ of dreaded Tehreek-e-Taliban Pakistan (TTP) commander Wali-ur-Rehman as “totally unacceptable” because Khan considered him to be a person who was “pro-peace.”

A few months later, Khan even went to the extent of mooting the idea of TTP being permitted to open an office in Pakistan and in a shocking statement said that “If the government is serious about pursuing the dialogue process with the TTP, it should allow them to have their own office like the one opened by the Afghan Taliban in Qatar.” Khan was again quite upset after TTP leader Hakimullah Mehsud was killed in a US drone strike in November 2013, as he perceived this as “a deliberate targeting of the peace process.” That the TTP chose him to represent them in mediation talks with the government in February 2014 proves that Khan was held in very high esteem by the TTP and considered to be a genuine well-wisher of this terrorist organisation.

Even though he refused to represent TTP, such implicit faith being reposed on the PTI chief by TTP justified him being nicknamed ‘Taliban Khan’. But with former TTP spokesperson Ehsanullah Ehsan who purportedly ‘surrendered’ to Pakistan army in 2017 revealing in a ‘confessional’ video that spy agencies of India (RAW) and Afghanistan (NDS) “supported (TTP), extending financial assistance and they also gave targets, and for each attack (TTP) charged a price,” Khan’s infatuation with TTP is more of a blackeye than an adulatory sobriquet. But having become Prime Minister thanks to the army’s blessings, Khan knows that as long as he remains in Rawalpindi’s good books by toeing its line, he’s got nothing to fear because the army will ensure every irritant and threat to ‘Taliban’ Khan is removed-like former TTP spokesperson Ehsan, who alongwith his family, mysteriously disappeared from the military’s custody!

So next time when the Pakistani delegation presents its case before the FATF, representatives of member countries should carefully consider that with Prime Minister Imran Khan bowling a ‘reverse swing’ by hailing OBL’s death as ‘martyrdom’, can Islamabad’s assurances on wiping out terrorism from its soil still be taken on its face value?