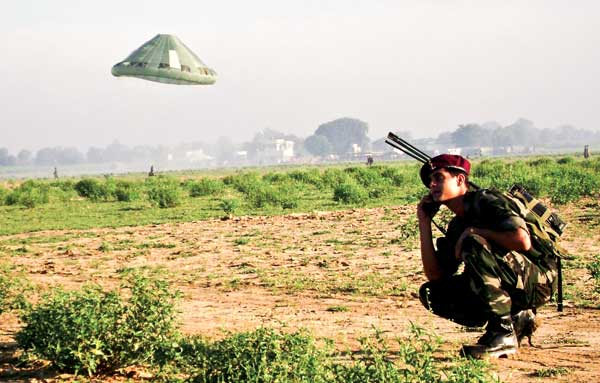 When I arrived in the United States in the early 1970s, to pursue a PhD in Physics and then shifted to Computer Science, one of the remarkable experiences I had was the extent to which my professors and many of the students were involved in US defense research even while they were at the University. This has been a widespread phenomenon. Many research grants are given by the Pentagon, Department of Defense and various other government agencies, which channel the energy and creativity of scholars and academics in science, technology and engineering. This gives an opportunity to advanced students in real-world experience rather than limiting them to theoretical and bookish knowledge. I was also given this opportunity, for which I had to get security clearance so that I could accompany my professor to meetings at the Pentagon. I have not heard of such opportunities in India at least not on a significant scale. Most of the professors in Indian higher education are working in silos on their own. Maybe a few of them get defense contracts, but these are small and not strategically significant.

Another thing I learnt in the US was that industry was also giving such grants to academia. It was common for some computer companies to give grants to professors and students. The pharmaceutical industry does the same, and business schools receive grants from famous brands. There is thus, a military-academic complex and an industry-academic complex; the third important link is the military-industry connection, completing the military-industrial-academic triangle.

The military-industrial complex in the US is a huge one. Some of the largest companies in the world are American defense contractors. The US private defense industry is over half a trillion dollars in annual turnover. Some of the large players in making advanced weapons include Lockheed Martin, Boeing, General Dynamics, Raytheon, Northrop Grumman, United Technologies, among others.

These days, many of these advanced defense contracts are in Artificial Intelligence, funded by the US the Department of Defense, CIA, and various branches of the armed forces. They also outsource research to universities. A big difference between DARPA (the US Defense Advanced Research Project Agency) and DRDO of India is that the latter’s resources are tied with manufacturing products, while DARPA’s role is that of a nodal agency co-ordinating and leading the research while mostof the manufacturing is done by the private industry.

When I was at ITT as Corporate Vice-President, Charles Kao had pioneered fibre optics as a part of a defense contract and was later awarded the Nobel Prize. ITT also pioneered in research in speech recognition as a part of the F16 fighter jet project, so that hands-free communication could be set up for pilots. This speech recognition project also went on to have commercial applications in the marketplace, but it was initially done for the department of Defense. DARPA also invented the internet, which was initially called DARPANET, then renamed ARPANET. Once it became commercially available it was called the Internet. The origin of driverless cars is also due to a DARPA competition among academic teams racing in the desert in the Mojave Desert.Likewise, the invention of transistors for which Bell Labs won a Nobel Prize and which lies at the heart of semiconductors, was a DoD project. There is a long list of fundamental breakthroughs resulting from collaborations between defense, industry and academics. These days, the advances in robotic soldiers and cutting-edge technology, all involve DARPA’s grants and contracts.

The same kind of military-industrial-academic complex also leads many research projects in China. In India, research by the defense department is not ahead of commercial applications. In fact, research is fragmented in separate domains. This is a serious issue.

Artificial intelligence is the latest field in which the Ministry of Defense must invest a lot of resources and make a comprehensive plan for all of India, beyond lmilitary applications. The strategy must include industry, society, culture and how the technology will make India a stronger nation. Nation-building using AI must include the unification and management of large numbers of diverse groups for mutual harmony.

Unfortunately, in India the work done by each of the military, academic and industrial camps is small. They are isolated and work in silos, which makes the output less synergistic. The research done in premier educational institutes of India is trivial compared with the United States because most of the higher institutes are involved in job-oriented teaching and campus politics with little original research. When a bright student enters a university in India, the practical projects available are of small scale and far from being cutting edge. Students don’t feel they belong to some big, futuristic project. Neither does Indian industry invest large amounts of money in academic research. At the same time, in order to justify and attract government and industry investments, academia too must transform itself to higher standards. The quality and quantity of research output, in terms of publications in world-class journals and patents, currently put out by India is abysmal, especially considering that India has a large number of professors and STEM students.

In contrast, China adopted the American model. The Communist Party and People’s Liberation Army control all the R&D not only in the government’s labs but also in the private sector and academics. All the digital giant multinationals of China are deeply aligned with the government. While this heavy-handed approach will not be viable in India, India could certainly go the American way by using big grants and defense contracts to scale and amplify academic work and industrial manufacturing for defense.

The Chinese government has not only actively recruited the best of Chinese and global technical talent, but also trained, encouraged and even sponsored their own youth to study and work in the US with the motive to return to China and work for their national cause. In contrast, most Indian students go abroad in their personal capacity, through family funding or scholarships and do not owe allegiance to their country in a formal sense. Most of them prefer to continue staying abroad and return only when they have visa issues. In contrast, almost 90% of the Chinese students who go abroad for higher degrees in frontier technology related domains, return home. A friend of mine, who is a professor in an ivy league in the US told me that if he has an application from a Chinese student and one from an equally qualified Indian student, he picks the Chinese because they have their own funding, whereas for the Indian he often has to arrange from his own funding sources.

Another important difference is that the Chinese do not send their students abroad to pursue studies in the liberal arts whereas a large part of the Indian students going abroad end up studying things like political science,history and social sciences. This is done from a Breaking India lens, using Indology that was the product of colonial British and later American. They learn to use the global leftist view or a Judeo-Christian view of India, and not a native Indian view. One doesn’t find this happening with the Chinese. Few Chinese students go to USA to learn about China. The major journals on Chinese history, political thought, and society are all in Mandarin, controlled by the Chinese scholars and the Americans have to oblige them to have their work published on these platforms. In India, it is the other way. Even a native Sanskrit scholar from Benaras or Tirupati feels validated only if he goes to Oxford or Harvard or Columbia University or Chicago University. Therefore, even the knowledge production on Indian history and culture is not controlled in India.

India, thus, has a lot of serious changes to implement, especially related to the ways its youth is trained by ensuring resources are focussed on the STEM domains. It should focus on incentivising the return of its talent pool abroad, leverage the network and connections they make during their studies abroad for national advantage.

My recent book Artificial Intelligence and the Future of Power discusses many of these problems India faces. I discuss the geopolitical impact of AI by the rise of China as the contender for the world’s foremost AI-based military-industrial complex. China has bet the proverbial farm on AI. No discussion on AI is complete without examining China’s role, and no evaluation of China’s future can fail to include AI at the center of its strategies. The clash between the US and China is this race for AI leadership because both countries’ current leaders know fully well that whoever dominates this technology stands to occupy the military and economic high ground. China is assuming a role similar to the erstwhile European colonisers and is in an all-out imperialistic clash with the US.

Apart from these two giants and a few other countries, most nations will lag increasingly as time goes by. It is virtually impossible to catch up in all the key elements of success that must be brought together—specialized AI hardware, big data resources turned into sophisticated assets, cutting-edge research, massive amounts of venture funding, and most importantly, visionary policies and implementation apparatus in government-industry-academic alliances.

was trained initially as a Physicist, and then as a Computer Scientist specializing in AI in the 1970s. After a successful corporate career in the US, he became an entrepreneur and founded and ran several IT companies in 20 countries. Since the early 1990s, as the founder of his non-profit Infinity Foundation (Princeton, USA), he has been researching civilizations and their engagement with technology from a historical, social sciences and mind sciences perspective. He has authored several best-selling books, including his latest title – Artificial Intelligence and the Future of Power. Infinity Foundation has also published a 14-volume series on the History of Indian Science & Technology. To know more, visit, www.aiandpower.com

5 thoughts on “Importance of Military-Industrial-Academic Complex”