The India Defense Industry has grown from USD 21.9 billion in 2010-11 to USD 37.3 billion in 2016-17, at a CAGR of 9.25%.  India ranks among the top 10 countries in the world in terms of its military expenditure and import of defense equipment. It allocates about 1.8% of its GDP to defense spending, of which 36% is assigned to capital acquisitions. However, only about 35% of defense equipment is manufactured in India. Moreover, even when defense products are manufactured domestically, there is a large import component of raw material at both the system and sub-system levels.

Given the above, it makes sense to focus on increasing the effort to manufacture in India, to increase self-reliance in arms procurement, and save precious foreign exchange – hence the “Offset Program”.

Offset is an element that counter-balances or compensates an act. It is a set-off from a development, in this case, military acquisition. An element of “compensation”is a predominant import of the term. It occurs when a supplier places work to an agreed value with firms in the buying country, over and above what it would have brought in the absence of the offset.

India ranks among the top 10 countries in the world in terms of its military expenditure and import of defense equipment.

We have a formal offset policy in place since 2005, which the Indian Ministry of Defence‘(MoD’) has been operating as part of the Defense Procurement Procedure (‘DPP’), the procurement manual used for capital acquisition for the Indian Armed Forces. The policy has undergone many rounds of revisions over time and its prime objective is to leverage India’s huge arms import for strengthening the indigenous arms industry. The current DPP 2016 lays down various categories of procurement processes namely, in priority, Buy Indian – IDDM (Indigenously Designed, Developed & Manufactured), Buy Indian, Buy & Make (Indian), Buy & Make (Global) and Buy Global.  Based on the Indigenous Content, as you go down the procurement category in priority, 30% offset is applicable on the foreign exchange component.

This offset requirement can be fulfilled by direct purchases from Indian enterprises, FDI in Indian Enterprises, Transfer of Technology and Equipment to Indian Enterprises and the Government of India.  Advanced Technology Acquisition by DRDO is also allowed under this category with a multiplier effect on the value to stress the importance of this category.  Dealings with Small & Medium Enterprises also are given a multiplier effect.

All in all, the offset opportunity can rise from USD 2.4 billion in 2013-14 to over USD 10 billion per annum in the next few years, just on the basis of current capital purchase requirements.

It’s obvious how the impact analysis of offsets suffers from lack of credible data in the public domain. The MoD has not come out with details required of the contracts signed. It has so far only given some broad and generic financial details—date of contract signing, value of the main contract and offset amount. The name of IOPs, the amount and kind of offsets received by each, and the detailed time-frame for execution of each offset contract still remains under the wraps. The lack of information on these counts thus hinders a precise economic analysis.

The response to FDI in defence production, R&D and also the creation of Joint Venture arrangements has been lukewarm. Since 2005, the offset policy has retained a key provision as per which foreign companies can discharge their offset obligation through FDI. As per the revised guidelines issued on August 26, 2014, FDI cap in the defence sector was increased to 49 percent (was 26 percent earlier). However, it is interesting to note that while foreign companies can claim offset credit for their equity investment in joint ventures, all FDIs may or may not be directly linked to offsets—the permissible FDI is cumulative and includes portfolio investment, which is not eligible for the purpose of discharge of offsets, and also FDI can be brought in by companies that either do not have or do not wish to have direct business with MoD in the future.

As per the Ministry of Commerce & Industry, the Government approved 33 JV/FDI proposals worth Rs 24.36 crores only between 2002 and 2014.  Defense was ranked 61 amongst 64 industries tracked.  This was when FDI was limited to 26%.  As per data released on March 15, 2015 in the Rajya Sabha, post August 2014 to March 2015 when FDI limits have been increased to 49% the FDI inflows have risen to Rs 96.10 crores, an improvement but not significant enough. Although the value of inflows in 8 months post-increase in FDI cap is significantly higher than the cumulative inflows in the preceding years (of more than a decade), there is no evidence of such inflows being influenced by offsets. There is not a single inflow, which is brought in by companies having offset liability with MoD.

A key point to see now is that with the increase in FDI to 100% (non-automatic route; Government approval required), will these numbers see a further increase.

•  Positive impact on exports of components & parts of aerospace companies

Source: Ministry of Commerce and Industry, Government of India

Further, as seen below, exports, which are in the nature of platforms, are mostly to countries other than the ones that have offset obligations with Indian MoD. On the other hand, the countries having an offset liability with India, account for the majority of exports under parts and components. The question is to what extent the export of the parts and components is influenced by offsets?  While direct impact seems minimal at this stage, data suggests that the increase in exports of parts and components have increased post introduction of offsets.  This suggests that offsets have had a role in creating of an eco-system, which is a positive in the long run. 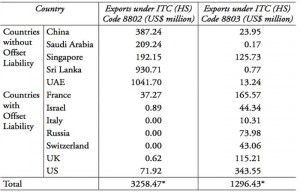 Source: Ministry of Commerce and Industry, Government of India

Why we should continue to be bullish on offsets.

There are many reasons for being bullish on the offset program’s success in the future and a few of them are listed below.

•  Enhancement of capabilities of our armed forces

Approximately 50% of our military equipment is estimated to be obsolete as against 15% as state-of-the-art.  It is the Ministry of Defence’s endeavour to increase state-of-the-art equipment by 15% and reduce obsolete machinery by 20%.  From 2001, capital expenditure on machinery has grown from around Rs 180 billion to around Rs 850 billion in 2013, a CAGR of 13%.

Statements from MoD indicate that India does not intend to slow down its purchase plan despite already engaging in a decade of intensive acquisitions.

As per Forbes, the election of Donald Trump as US President is likely to boost US military spending by USD 500 billion to USD 1 trillion.  This coupled with Trump’s staunch stance on terrorism and strengthening of US – Russia (with whom India has, historically, the deepest defence relationships) ties, is expected to give enhance US – Indian defence and strategic relationships.

•  Creation of an aerospace and defense ecosystem

As seen earlier, there has been a substantial increase in the exports of aerospace parts and components.  While not directly related to defense or the offset program, it is imperative that a strong ecosystem is created for the long-term success of India’s defense indigenization push.  The offset program will thrive on this ecosystem.

India has lagged behind China in defence spending for more than a decade and the gap between the two is rapidly increasing.  This needs to be rectified given the friction between the two countries and the ties between China and Pakistan.

India has emerged as a major global hub for auto and auto component manufacturing; especially in the “small car” market and many global majors are also using India as a base for manufacturing.  The Government and Private Sector have made significant investments around this.  The skill sets required for auto components are fairly common with aerospace and defense, though on a much higher complexity scale.  In addition, we have seen auto component majors moving up the value chain to aerospace components eg Tatas, Mahindras, Bharat Forge, Sansera and Amtek amongst others.

While this could create a concern that this could dilute India’s position as a Tier 3 supplier of non-critical parts, my belief is that without this critical base, it will be very difficult to create a manufacturing powerhouse for defense products in the long run.  Auto components also went through the same life cycle from components to becoming a manufacturing hub for small cars.

India has lagged behind China in defence spending for more than a decade and the gap between the two is rapidly increasing.  This needs to be rectified given the friction between the two countries and the ties between China and Pakistan.

Further, given China’s ban on import of weapons from countries such as US and UK, etc after the Tiananmen Square incident, it has focussed on indigenous defence production rather than imports. Consequently, today it has become the fastest growing arms exporter worldwide. The lack of a national strategy/policy for promoting defence exports is hampering domestic defence sales and needs to be rectified.

Finally, it is high time offsets are viewed not as one-time agreements, but as an integral element of the long-term national policy.

An experienced investment banker and a partner at Aurum Equity Partners.

One thought on “Impact Analysis of the Indian Defence Offset Program”