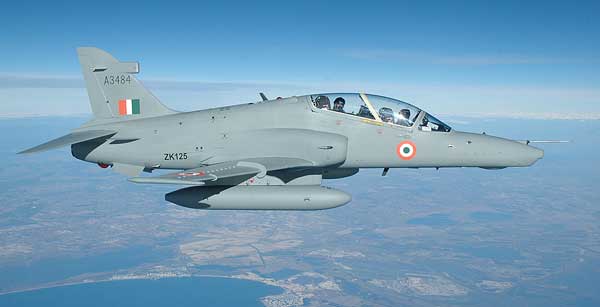 Up till mid-2009, for basic training, the IAF was using the HPT-32, a piston-engine aircraft produced indigenously by Hindustan Aeronautics Limited (HAL). This aircraft was in service with the IAF since 1987 and had progressively become unreliable. On account of 17 hull losses and 19 pilots’ lives lost, the IAF had steadily lost confidence about the safety and performance of the aircraft. The HPT-32 served the IAF for close to two decades and the service had been very keen to have them back in the air. This is due to the large numbers (over 100) and significant residual life still left in the fleet. Rather surprisingly, HAL was unable to solve the issues related to the fuel system of the aircraft.

Quantitatively speaking, the Training Command of the Indian Air Force (IAF) flies about a third of the total flying hours logged by the service thus underscoring the significance of the old adage about hoping for the best and preparing for the worst. As a professional Air Force, proud to be the fourth largest in the world, the IAF is constantly preparing for the worst, i.e. for a two-front war imposed on the nation through combined action by China and Pakistan. In the pursuit of an operational capability that can deal effectively with either or both of these inimical neighbours in a possible future war, the IAF has a vision and matching ambitious plans which include induction of modern fourth and fifth generation combat aircraft, strategic and tactical transport aircraft, a variety of force multipliers and the means for the exploitation of space for warfare.

However, the IAF has not been bestowed with the wherewithal to consummate this vision, primarily on account of lack of comprehension and response on the part of the government, bureaucratic inefficiency and an inefficient indigenous aerospace industry. Somehow, the IAF’s needs for ensuring national security have been misperceived as wants for self-glorification. One of the areas where this obfuscation has diluted the IAF’s preparation for war is that of availability of suitable aircraft for the ab initio training of pilots into frontline ‘air warriors’.

The IAF selects and trains its own pilots. Training requirements have been refined through years of dedicated application to flying training by the finest bunch of trainers in the world whom the IAF addresses as Qualified Flying Instructors (QFIs). Every IAF pilot unabashedly dreams of becoming a QFI and to train greenhorn pilots to become operational in the IAF; a process which has been developed to a three-stage progression. The three stages, as in the case of most modern air forces, involve a basic stage on a turboprop aircraft, an intermediate stage on a jet aircraft of modest performance and an advanced stage which employs an advanced jet trainer. This process is the rough outline for the training of a fighter pilot, the cutting edge of a modern air force.

The transport and helicopter stream training is fairly well established…

Like most air forces, the IAF conducts the basic stage training on turboprop aircraft over 24 weeks as a common denominator for all trainee pilots, trifurcating thereafter into the fighter, transport and helicopter streams. This depends on the policy in vogue which in turn is dependent on the requirements of the three streams. The intermediate stage training lasting another 24 weeks is carried out at separate training establishments for the three streams. After completing this stage, successful pilot trainees are commissioned as Officers in the IAF and then move on to the advanced stage for specialisation in their streams.

For the fighter stream, intermediate stage training is conducted at Hakimpet (Secunderabad) and advanced stage at Bidar (Karnataka). For the transport stream, both are conducted at Yelahanka in Bangalore while for the helicopter stream, the intermediate and advanced stages are conducted at Hakimpet and Yelahanka respectively. On completion of the three stages, pilots are assigned to operational squadrons for further training and utilisation.

The transport and helicopter stream training is fairly well established and as long as a trainee pilot arrives at the threshold of intermediate stage with a modest amount of flying experience on a basic trainer, his progression is fairly well ensured with the present training platforms. However, for the fighter stream, the training aircraft is more crucial to the quality of the end product – the fighter pilot. This article focuses on the progression of the fighter stream trainee pilot.

Despite a stringent battery of tests in the selection process, there is an attrition that afflicts fresh trainees as they progress through the three stages outlined above. As a thumb rule, the attrition rates are about 15, 10 and 5 per cent during the three stages respectively. Based on this attrition rate and other considerations (including projected aircraft inventories), the IAF has worked out its current requirement to be 181 Basic Trainer Aircraft (BTA), 85 Intermediate Jet Trainers (IJT) and 106 Advanced Jet Trainers (AJT). So how is this requirement being met quantitatively and qualitatively?

Up till mid-2009, for basic training, the IAF was using the HPT-32, a piston-engine aircraft produced indigenously by Hindustan Aeronautics Limited (HAL). This aircraft was in service with the IAF since 1987 and had progressively become unreliable. On account of 17 hull losses and 19 pilots’ lives lost, the IAF had steadily lost confidence about the safety and performance of the aircraft. The HPT-32 served the IAF for close to two decades and the service had been very keen to have them back in the air. This is due to the large numbers (over 100) and significant residual life still left in the fleet. Rather surprisingly, HAL was unable to solve the issues related to the fuel system of the aircraft.

In 2009, the HPT-32 was grounded and despite the warning signs for the preceding months, the IAF was suddenly left with no basic trainer. The problem, as with all acquisition for the IAF, was home-grown. HAL was lobbying hard to sell a replacement (as yet untested) to the IAF which the IAF found unsuitable for the task. In any case, there were much better and proven machines available in the global market at a life-cycle cost lower than that of the HTT-40 proposed by HAL.

With considerable delays and consequent impairment of the IAF’s pilot training dispensation and almost three years after the grounding of the HPT-32, on May 10, 2012, the government finally cleared the proposal to procure the first batch of 75 Pilatus PC 7 Mk II aircraft from Switzerland. The Rs 2,800 crore contract between the Government of India and the Original Equipment Manufacturer (OEM) Pilatus Aircraft of Switzerland, was concluded on May 24, 2012. Normally, the process of signing a contract from the time the Cabinet Committee on Security clears the proposal is about two months but the IAF had pressed for urgent action as there had already been inordinate delay in the finalisation of the deal.

In 2009, the HPT-32 was grounded; the IAF was suddenly left with no basic trainer…

First introduced by the OEM in 1994, the Pilatus PC-7 Mk II is a low-wing, tandem-seat fully aerobatic turboprop trainer employed for basic training for military aviators. In all, there are over 900 of these machines, along with the Mk I version, in operation in the air forces of 18 different countries around the world. India is the 19th. Beyond the 75 aircraft being procured directly from Pilatus, there is an option for another 106 to be license-built by HAL in India. It has a Pratt & Whitney engine and a four-bladed aluminium propeller which, Pilatus claims as having the lowest engine operating costs among all comparable turboprop trainer aircraft. The aircraft has a modern glass cockpit, ejection seats and an oxygen generating system.

The Pilatus contract provides for extension of scope of the contract within three years from initial signing. HAL’s HTT-40 is still far from operationalisation and is likely to be ready to enter service only by 2018. By then, Pilatus would have transferred technology to HAL and a substantial amount of investment would have been made to set up maintenance facilities adequate to support the three decades of the aircraft’s service life. In short, the HTT 40 would not be of use to the IAF. On May 31, 2013, the Pilatus was inducted into the IAF which is delighted with the choice. The much needed revamp of the basic trainer is done and, barring a miraculous return of the HPT 32 (with some major modifications by HAL to the 100-odd aircraft still with the IAF), the Pilatus 7 Mk II will continue to be the basic trainer for the IAF up to 2043. Even if the HPT-32 returns, it may be used only as a stepping stone to the Pilatus.