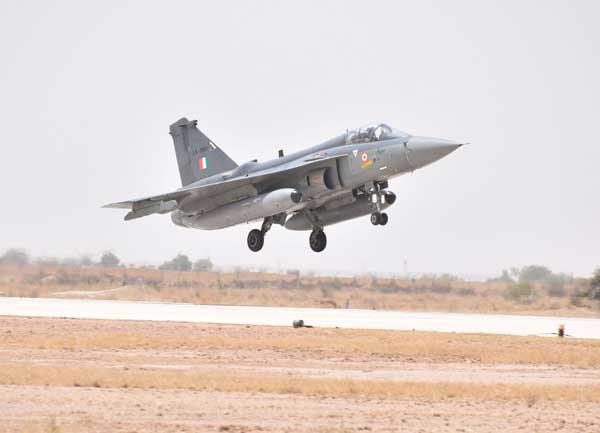 The Indian Air Force Conducted its recent Exercise Gagan Shakti 2018 in April 2018. It was an exercise to learn meaningful lessons in a short and intense battle scenario. According to the press release, “lAF exercised its entire war fighting machinery to validate its concept of operations and war waging capability”. It is also claimed that, “During the exercise, more than 11000 sorties were flown, which include approx 9000 sorties by fighter aircraft”.

This short article analyses the possible distribution of these combat sorties within the constraints of each type of aircraft available to Indian Air Force and it also tries to give estimates on possible attrition or aircraft losses in such war scenarios. By no means, the author claims this to be an authentic estimate and it’s not from any official source. However, within the range of different constraints, historical attrition rates, potential capabilities of adversaries and characteristic of such an air war scenario, we present an estimate of likely losses IAF will suffer in its combat aircraft. 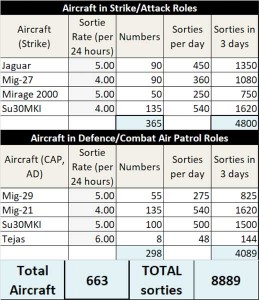 The numbers, sortie rates and number of sorties generated in 3 days of intense operations are given in the following Tables. We assume that IAF will deploy 365 aircraft for Strike/Attack roles and 298 for AD/CAP roles. Further the number of sorties as per our assumptions will be 4800 in Strike and 4089 in Defence/CAP roles.

The war envisaged in Gagan Shakti 2018 has two phases. In Phase I, the focus was on western side and in Phase II, the war operations had to be shifted to eastern side. Potential scenario envisaged in that the war starts with Pakistan and then China joins in and starts an intense air operation. India must quickly respond by shifting part of its assets from western flanks to Eastern flanks.

Our aim in this article, however, is to estimate the potential loss of aircraft (attrition) that may emerge. Typically, aircraft attrition rates are used based on sorties. For example, if you have 20 aircraft and each does 3 sorties per day, potentially you will have 60 sorties in a day. The attrition rate defines the probability of loss in each sortie, given in percentages. In intense air wars, an attrition rate of 2% to 3% has been utilized based on historical data from 20th century wars. Air wars, after 1991 Gulf-War and especially in the 21st century have been one sided as the air assets of the adversaries have been asymmetric. In an India-Pakistan and India-China war, it will be symmetric in the sense that all the three countries will have much more evolved air assets, doctrines, capabilities and technologies. 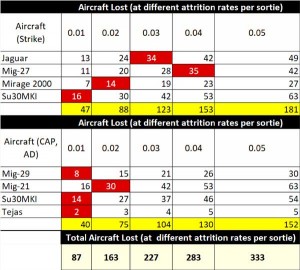 We estimate these attrition rates per sortie may vary from 1% to 5%. Envisaging these ranges we calculate the potential losses on the base of number of sorties estimated above for each type of aircraft in strike and air defence roles. It can be seen, that at 5% attrition rate, we will lose half of our aircraft in the scenario envisaged. However, we estimate such extreme loss may not be likely. In fact, at 2% loss per sortie, 88 strike aircraft and 75 Air Defence aircraft will be lost, making the total loss to 163. This means a loss of about 25% of the total 663 aircraft estimated above. 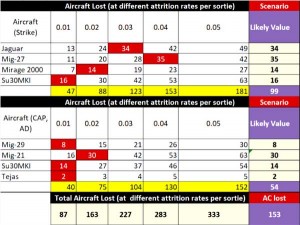 Given the role, capabilities and technology we estimate, a likely scenario for each type of aircraft in specific role. For example, Jaguar being a strike a aircraft will most likely have to bear the brunt with 3% attrition rate and Mig-27 may be even higher or 4% per sortie. Mirage 2000 and Su30MKI will go as strike packages with Jaguars and Mig-27s and also as Escorts. Potentially, there much better stand-off capability and technology will keep their attrition rates at the low of 2% and 1% respectively, in the strike role. In the AD/CAP roles, we believe the attrition rates of all will be at 1%. However, we envisage Mig21s being older and limited in different aspects, may face higher attrition rates of 2%.

Thus, in the Most likely scenario, the picture emerges as below. IAF will lose a total of 99 aircraft in strike role and a total of 54 aircraft in defence role. This results in a loss of 153 aircraft that is slightly less than 163 that we calculated at uniform 2% attrition rate. 23% loss of aircraft is substantial.

One aspect that emerges from the above analysis is that the 3 days air war envisaged in Gagan Shakti 2018 will be intense and unprecedented because of the scale and symmetrical capabilities of both sides. It will result is heavy losses on both sides.  It also gives us a clear indication of the role of stand-off weapons and modern aircraft to minimize the attrition and increase the rate of sorties. Further, we need to look at the key changes from the last century air war that need to be incorporated in the type of force structure and assets IAF should have.

Last century air combat especially when both sides have almost equivalent strengths including air defences and air superiority assets along with C4ISR capabilities will result in these sort of attrition rates. Last two decades with new type of systems and warfare in place with extensive Beyond Visual Range, stand -off attack weapons and comprehensive navigation and stealth components these numbers and attrition rates need to be worked out. Various simulations may give some indications. However, given the increasing density and tempo of warfare – everyone need to solve this equation of minimization of attrition with maximization of concentration of effective lethality. One can see how US/Allies achieved it in 1991 gulf war.

IAF still seems to be playing the old game of traditional air warfare going by the response of 9000 sorties in 3 days. There are much better alternatives now of contact-less combat, unmanned, robotic and stand-off options where the less number of combat sorties will need to be backed up by more number of non-combat sorties. Just to clarify though, even Pakistan and China will also have the same attrition rates if they haven’t evolved their air war doctrine with newer technologies used effectively in an innovative manner.

Exercise Gagan Shakti 2018, while demonstrating a commendable and massive ability of Indian Air Force to generate 11000 sorties in 3 days, gives an indication of how much the IAF doctrine is manned aircraft based.  It may be prudent to create a force structure with stand-off, more “effective and precision lethality” assets and estimate and plan the minimum number of aircraft sorties. The optimization problem in mathematical terms can be articulated as – Minimize the number of manned combat sorties and inflict effective lethality at the least cost. Investing in simpler platforms with longer ranges, precision, automated and hypersonic weapons with the added assets in C4ISR may be the key.