Hypersonic Weapons: A New Threat or Just Another Technology Demonstrator? 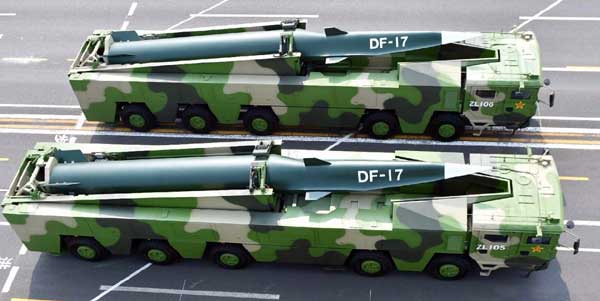 One of the most keenly observed weapons system during China’s National Day military parade on 1 October 2019 was the hypersonic glide vehicle. 18 of the sleek, aerodynamically shaped glide vehicles participated in the parade, presenting a whole new weapon system which many have called as a game changer.

China has already publicly announced the deployment of hypersonic weapons though some analyst shad expressed their scepticism and called them nothing more than ‘prototypes’. To be fair, they were not the first ‘hypersonic’ systems as the first intercontinental ballistic missiles of the late-1950s were the first to reach hypersonic speeds.

The main advantage that the DF-17 has over ‘conventional’ weapons is however not the speed alone. It is the manoeuvrability and precision strike capability. Unlike a ballistic missile that move along a predictable trajectory on its descent, the HGV leverage atmospheric lift and drag forces to glide on a flight trajectory that is too high for many endo-atmospheric interceptors and too low to be detected and tracked early by long range radars. As the HGVs can, to a degree, manoeuvre low to evade radars, they have unpredictable and low flight routes making them difficult to track and engage by the anti-missile systems designed to counter ballistic missiles.

The difficulty in engaging them is faced even by terminal point defences as their speed gives very less reaction time. The HGV thus has a reasonable chance of defeating both the anti-missile system, due to their trajectory and manoeuvrability, and the terminal defences due to their speed. Compounding the threat posed by the HGV is their accuracy. Analysis of the tests and trials of the DF-17 over the years have shown that the HGV is apparently capable of striking within metres of their targets. This combination of speed, precision and evasiveness is what makes the HGV a formidable threat.

It is thus not surprising that they have been described by some analysts as “the biggest military challenge of the Trump era1” and that the United States admittedly does “not have any defence that could deny the employment of such a weapon2.” Due to their unpredictable flight routes and low trajectory, hypersonic weapons are very difficult to intercept, thus posing huge challenges for early warning systems.

The HGV are likely to be employed as ‘first-strike’ option, to overwhelm the air defences and open up a corridor enabling the follow up assets to carry out the strike(s). Though China has publicly declared that its HGV will carry conventional payloads only, the fact remains that they (and other hypersonics) are capable of carrying nuclear warheads and the possibility of the same cannot be ruled out in a future conflict. As the radars would provide much less warning time of a boost-glide weapon attack than a ballistic missile attack, it adds to the decision dilemma as to whether the HGV is carrying a conventional or a nuclear warhead. The response to both is obviously different and the risk of leaving what could be a nuclear strike unchallenged is something that no country may take. This is what makes the HGVs a very potent threat and dangerous.

The HGV are however not without its sceptics. As the HGV do not have any integral power plant and after ‘launch’ from the carrier can only glide on to the target, one view is that they may ‘actually slow down quite a bit and makes a much better target than traditional ICBMs for missiles defences3.”

As the HGV can carry nuclear payloads also, one option to counter the threat is to have a new arms control agreement aimed at certain classes of hypersonic weapons though it may be of limited value as it is unlikely to prevent the use of conventional tactical hypersonic weapons. But even if it addresses the bigger threat of nuclear hypersonic weapons, it may still be of some use. The main hurdle in exercising this option is the breakdown of international arms control agreements, notably the dismantling of the Intermediate Range Nuclear Forces Treaty (INF).As a number of countries including India and Japan,not signatories of any nuclear arms control regimes, are also developing hypersonic weapons, it may be difficult to cap their spread and development. The only viable option then is of active defensive measures.

Leading the charge in developing such systems is the United States which is considering several options including a ‘Glide Breaker’ designed to intercept HGVs. According to Unites States’ Defence Advanced Research Projects Agency (DARPA), the glide breaker programme aims to “develop and demonstrate a technology that is critical for enabling an advanced interceptor capable of engaging manoeuvring hypersonic threats in the upper atmosphere4.”The glide breaker is expected to enable the United States to intercept HGVs, forming a perfect ‘defence by denial’ deterrent.

The other counters being developed are the Mulitple Object Kill Vehicles, as a possible defence against MIRVs and multiple re-entry vehicle (MRVs) and an extended range Terminal High Altitude Area Defence (THAAD)-ER system as well as exo-atmospheric interceptors5.

One of the offensive counter measures being developed is the conventional prompt global strike capability (CPGS) would also enable the United States to reach any target in the world in less than sixty minutes. With this, the missile launchers that carry HGV equipped ballistic missiles can potentially be targeted and destroyed even before they take their flight. One limitation of this option is use of dummy launchers and silos to deceive and disrupt the CPGS strikes6.

Being developed in conjunction with the aforementioned systems are space based sensors capable of detecting and tracking the HGVs. These are critical for an effective counter-systems are they can provide timely warning and adequate reaction time. It is also appreciated that in times to come, space-based interceptors will also be developed that would be conducive against HGVs.

Hypersonic glide vehicles, such as the Avangard and DF-17, are launched using ICBMs and travel in space along a similar trajectory. Should a hypersonic glide vehicle be launched against an adversary, the ambiguity about its payload and its resemblance to traditional nuclear armed ballistic missiles are bound to make targets think they are under nuclear attack, even if they aren’t. This ambiguity makes the counter systems of little use for it will be difficult to decide whiter a deterrent strike by own nuclear weapons is in order or a conventional counter system like glide breaker would suffice. Resolving this decision dilemma is the main sticking point – with no easy answers as on date.

Even otherwise, with limited efficacy of present generation air defences against HGVs, and limited scope of containing their spread, developing a deterrent capability remains the only reliable fall-back option. This would result in a mutual deterrence akin to the nuclear deterrence and the Mutually Assured Destruction (MAD) It is for this reason that a number of countries including India and Japan are developing hypersonics.

In the years to come, we may see the hyppersonics proliferate further and may have to learn to live with them.