Home  >  News  > Geopolitics  >  Hundred Years of Peace with India: A Non-Starter from the Word Go

Hundred Years of Peace with India: A Non-Starter from the Word Go 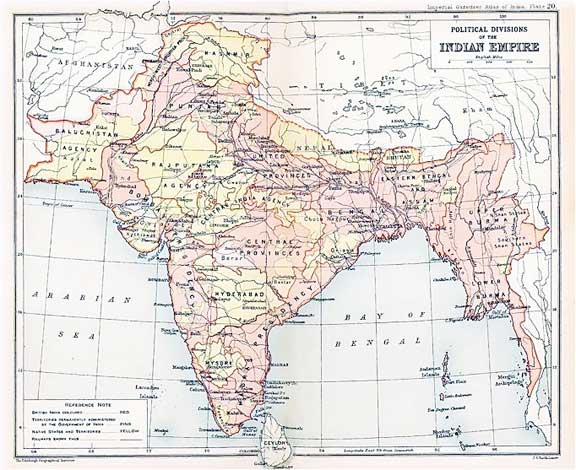 As expected there was a wave of euphoria amongst the Indian liberal community. They see the Pakistani National Security Policy as a success of all their Track 1.5, Track 2 and the other Umpteen tracks…. dialogues which are basically a compromise of India’s interests.

Let us consider a fictitious scenario wherein India had not been divided by the British in 1947. India would have extended from Khyber Pass in the West to Kibutu in the Lohit Valley in the East. From Khunjerab and  Karakoram Passes in the North to Kanyakumari in the South. The Coastline would be from Gwadar in the Arabian Sea to Cox’s Bazar in Bay of Bengal. The prominent jutting Peninsula of the sub-continent sits dominating the vital East-West Sea Lines of Communications that crisscross the Indian Ocean. The strategic geography of the sub-continent would effectively influence the region from Persia and Afghanistan to Indonesia and Philippines. Such power and influence was not to the liking of colonial Britain. Divide and rule was their game and they played it well.

At the end of the mass migration Pakistan was not the “land of the pure” nor had all Muslims in India opted to leave to an uncertain future in this newly created nation. Both countries had sizable communities of all religions.

To ensure that India forever remains confined to its limited region of South Asia, the Brits orchestrated the Hindu-Muslim divide and apportioned the subcontinent on an arbitrary basis to Hindus and Muslims. The massacre of human beings during the Partition was not some Hitler ordering the extermination of the Jews or Stalin eliminating all opposition to consolidate his power. But it was childhood friends, classmates, neighbours and colleagues who were incited to kill the other flamed by rumours and in the name of religion! True that the generation that was witness to those dark events has now gone. But has that diminished the memories of the Nation of that horrendous holocaust? At the end of the mass migration Pakistan was not the “land of the pure” nor had all Muslims in India opted to leave to an uncertain future in this newly created nation. Both countries had sizable communities of all religions.

My argument is not some cerebral one on strategic analysis but of a very basic one of human emotions and sentiments.

History records that Jinnah was once an ambassador of Hindu-Muslim unity. However, when the Partition of India finally occurred, Jinnah, soon-to-be Governor-General of the Dominion of Pakistan, outlined his vision of Pakistan in an address to the Constituent Assembly, delivered on 11 August 1947. He spoke of an inclusive and impartial government, religious freedom, rule of law and equality for all. He opened by saying the Assembly had two tasks: Writing a provisional constitution and governing the country. He listed “law and order” as an urgent problem, “so life, property and religious beliefs are protected”. According to him “a united India would never have worked”. Pointing out that England in past centuries had settled its fierce sectarian persecutions, he proposed that “in course of time Hindus would cease to be Hindus and Muslims would cease to be Muslims, not in the religious sense, because that is the personal faith of each individual, but in the political sense as citizens of the State.”

The division of the sub-continent on religious basis will remain an insurmountable impediment in any reconciliation effort between the two countries.

Echoing the sentiments of Jinnah, his followers believed that under any Hindu dispensation the Muslims will get a raw deal if they stayed with India. So to make a clean break Pakistan wanted to rid itself with all affiliations with India, be they civilisational, cultural or traditional. It has ditched the ethos and heritage of the pre-Islamic era.

Pakistan has consciously divested its people of their ancient culture. The Vedic period (1500–500 BCE) was characterised by an Indo-Aryan culture; during this period the Vedas, the oldest scriptures associated with Hinduism, were composed, and this culture later became well established in the region. Multan was an important Hindu pilgrimage centre. The Vedic civilisation flourished in the ancient Gandhāran city of Takṣaśilā, now Taxila in the Pak Punjab, which was founded around 1000 BCE. Taxila had one of the earliest universities and centres of higher education in the world, which was established during the late Vedic period in 6th century BCE. At its zenith, the Rai Dynasty (489–632 CE) of Sindh ruled this region and the surrounding territories. The Pala Dynasty was the last Buddhist empire, which, under Dharmapala and Devapala, stretched across South Asia from what is now Bangladesh through Northern India to Pakistan. As a consequence of its break away Pakistan does not have any tuck with India’s 5000 year old civilization. Does one assume then that Pakistani’s are a rootless society with a pathetic civilisational and cultural history of just 75 years of the post- modern era?!

The division of the sub-continent on religious basis will remain an insurmountable impediment in any reconciliation effort between the two countries. To befriend India and establish normalcy would mean acceptance that the two communities can in fact flourish together. This will not be acceptable to the hardliners. To ensure no such sentiment arises every Muslim in Pakistan openly wants to display is piousness and in boasting of being more Muslim than his neighbour. It has been heydays for the Mullas and Maulvis. They have contributed the most in process of radicalisation of their flocks, each wanting to outdo the other. Their very existence depends on consolidating the radicalised faithful flock. Places of worship of the minority communities continued to be targeted. India has asked the UN to take cognisance of ‘Hinduphobia’ in Pakistan. The non-Muslims are second class citizens in every respect. They are being targeted for conversion. Society seems to give sanction to these debased acts.

The entire Pakistani population below 60 years age has, through the education system, been systematically fed malicious lies and hate against India that an obscure top driven policy will do little to alter.

How does one reconcile to the cold blooded murder of thousands of Kashmiri Hindus and the forced exodus of half a million of them from the Kashmir valley incited by religious hatred backed by Pakistani trained and armed terrorists? They were targeted by their childhood friends, who had grown up together, by the neighbours and colleagues. All in the name of religion. Ironically, they were of the Hindu faith too till they were forcibly converted to accept Islam when it came to Kashmir.

The entire Pakistani population below 60 years age has, through the education system, been systematically fed malicious lies and hate against India that an obscure top driven policy will do little to alter. In 1964 China exploded its first atomic device. Most thought that India would follow suit. As a threat, in 1965 Bhutto proclaimed that – “We (Pakistan) will eat grass, even go hungry, but we will get one of our own (Atom bomb – if India exploded a device)…. We have no other choice!”

Later in the same year in a speech to the UN Security Council, Bhutto, declared a “thousand-year war against India”. Pakistani Army Chief General Zia-ul-Haq gave form to Bhutto’s “thousand year’s war” with the ‘bleeding India through a thousand cuts’ doctrine using covert and low-intensity warfare with militancy and infiltration. This doctrine was first attempted during the Punjab insurgency and then in Kashmir insurgency using India’s western border with Pakistan. It continues to target India with newer ways enabled by technology and through fake news on social media. So Pakistan has threatened India with a 1000 year war, bleed India by a 1000 cuts and also promised to keep themselves fighting fit by just eating grass. After all, bulls in the ‘jallikattu’ or those that Spanish Matadors fight in the ring are tough bulls and their diet is only grass!

Will there be a grassroots swell in Pakistan to support this ‘hypothetical scenario’ of the government? The opposition is waiting to call the governments bluff and anyone suggesting that this be the new Pak foreign policy initiative will be hollered down as being an ‘India Agent’. The policy reiterates that Kashmir remains a ‘vital national policy’. Kashmir will remain on Pakistan’s agenda and any move forward in bilateral relations will be high-jacked by bringing in the Kashmir issue. So what has changed?

100 years of peace is a welcome thought. However, the onus to make it work lies entirely with Pakistan.

The background whispers are that Pakistani officials have categorically ruled out any reconciliation with the present dispensation in New Delhi. Therefore, it puts into doubt when will this policy actually be implemented? What if this Government comes to power again in 2024 for another five year term? Will the Policy be given an ignominious burial?

Any Punjabi will find it difficult to have a detached frigid view of the dark days of the Partition. They bore the brunt of it. I too would want to go and see the village where my father was born exactly 100 years back. To also see the lands my grandfather tilled to feed his family comprising his wife and eight children and probably his parents and some siblings too. That was our ancestors land from where millions like my grandfather got uprooted for no fault of theirs. They faced much hardships and privations in their lives as refugees. When compensation was due the Indian bureaucracy demanded their pound of flesh. These people had no capacity to meet those demands. They struggled on their own. It has taken two generations to stabilise.

100 years of peace is a welcome thought. However, the onus to make it work lies entirely with Pakistan.

3 thoughts on “Hundred Years of Peace with India: A Non-Starter from the Word Go”