Home  >  News  > Homeland Security  >  Humanitarian Crisis in the BTAD of Assam: A view from the Field

Humanitarian Crisis in the BTAD of Assam: A view from the Field 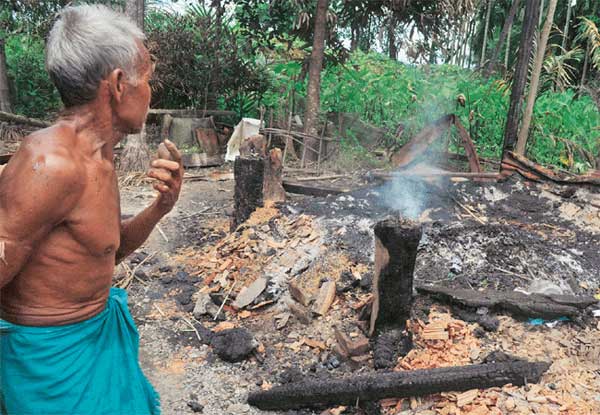 On 23rd and 24th December 2014, 82 Adivasis (including 26 women and 16 infants) were shot dead by suspected militants belonging to the National Democratic Front for Bodoland (Songbojit) or NDFB(S) in Kokrajhar, Sonitpur, Udalguri and Chirang districts of Assam. The murder of these innocent civilians in these horrific targeted killings sparked a range of protests across the region. This also saw the launching of a large scale counterinsurgency operation (Operation All Out) with the aim of dismantling the NDFB (S).

As the crisis prolongs there is an increasing risk of severe food shortages and the occurrence of maternal as well infant mortality in the relief camps.

With around 300,000 people displaced (including Adivasis and Bodos) in the immediate aftermath of the crisis, there were still more than 100,000 people living in relief camps in increasingly sub-human conditions at the time the article was being written. The crisis is still continuing as of many the displaced communities are refusing to return to their villages due to fear and have made their return contingent on the creation of security outposts in the respective villages. As the crisis prolongs there is an increasing risk of severe food shortages and the occurrence of maternal as well infant mortality in the relief camps.

It is also critical to contextualize the present crisis. The Bodo Territorial Autonomous Districts (BTAD) region[1] also witnessed a similar episode of forced displacement when more than 500,000 people were displaced following ethnic violence between the Bengali Muslimsand the Bodo community in 2012 the consequences of which have continued to the present day. While analysis of the contemporary violence focused on the ‘harder’ security questions especially on the counterinsurgency operations being directed against the NDFB (S) there was very little attention paid to the unfolding humanitarian crisis (which was one of the largest experienced in the post-independence period). The article thus seeks to provide an outline of the post-conflict situation based on empirical evidence collected in the course of research being conducted in the region.

For those who are outside the national humanitarian emergency response sector, the large scale forced displacement is seen as an inevitable consequence of violence. The assumption is that the existing governance mechanisms and capabilities are sufficient to avert catastrophic humanitarian failures arising in these conflict situations. However, the dismal statistics emerging out of the crisis-affected districts of the region, especially Chirang and Kokrajhar, belie this assumption. Rather it shows that the scale of the crisis can overwhelm the existing response mechanisms and capacities.

…it was found that in one relief camp in Kokrajhar with 5000 residents there were 10 unsegregated toilets servicing the entire camp population.

Statistical data in humanitarian emergencies is only an aggregate of the suffering experienced by those directly affected by the disaster. But at the same time, without statistics the scale of a disaster will never be truly understood. The statistics and qualitative findings being discussed in the article are derived from an independent field assessment conducted by the Center for Study of Political Violence (CSPV) in January 2014 in the districts of Chirang and Kokrajhar in the immediate aftermath of the crisis. The field assessment relied on multiple sources of information including various district authorities, civil society organizations and the affected communities (especially camp committees).

It must be noted that these official figures are not absolute numbers but subject to a high degree of variation. Many relief camps are inaccessible and remain unlisted due to the vagaries of geography and the existing security situation. The methodology underlying the CSPV assessment that included visits to unlisted camps led to a figure of nearly 38,000 children residing in the relief camps in Chirang and Kokrajhar at the peak of the crisis. This highlights the difficulty in collecting accurate and precise information for humanitarian response planning. Moreover, there is a stark difference between those camps that are listed and those they are not as official relief only reaches listed camps. Also, in humanitarian emergencies, pregnant women and infants are categories who face a high risk of mortality because of the adverse conditions in terms of lack of nutrition, occurrence water contamination, the non-provision of basic ante-natal and pediatric care. In field interviews in Chirang itself it was found that basic necessities like iron, folic acid and other such supplements are not reaching pregnant women as ASHA (Accredited Social Health Activists) and  Auxiliary Nurse Midwife (ANM) workers are not being able to access camps or refusing to visit cases due to safety concerns.

The level of insecurity is such that people dwelling in the camps require police protection to collect firewood for their daily use, which makes the routine task of cooking itself a matter of utter despair.

An often made argument that also needs to be disputed is that relief camps are “safe spaces” and that the camp population actually prefer residing in these locations because they have regular access to food and other essential items. This is absolutely untrue. A relief camp is an overcrowded space where there is no sense of home, no privacy and no regular access to food, safe drinking water or sanitation. During the assessment, it was found that in one relief camp in Kokrajhar with 5000 residents there were 10 unsegregated toilets servicing the entire camp population. Similarly in Chirang for a camp with 1270 residents there were 6 toilets. Apart from the risk of disease this further raises additional safety concerns for women as these toilets were unlit and are situated in the extreme edge of the camps.

The precarious health situation arising out of unsanitary conditions is also reflected in the types of diseases emerging in the camps.  For instance by the 10th of January 2015 an aggregate of 2884 cases of diarrhea and 1781 dysentery cases had been treated in camps in both districts with numbers being updated on a daily basis. The official food rations being given since the 23rd of December 2014 consisted purely of rice, salt, lentils and oil, with no additional nutritional supplements and these are being cooked in extremely unsanitary conditions. The level of insecurity is such that people dwelling in the camps require police protection to collect firewood for their daily use, which makes the routine task of cooking itself a matter of utter despair.

Another assumption that needs to be contested is that the existing mechanisms to respond to the crisis (which compares with any international humanitarian emergency) are adequate. Moreover given the existing evidence the expectation would be that a large number of specialized agencies (both state and civil society organizations)would be present in the field to cope with the management of the relief camps which at more than 70).This is far from the actual reality. The burden of the response has actually fallen squarely on the shoulders of the various district authorities in the region and a few locally based NGOs. These responders are overstretched without any external help.

Given the scale of the crisis, it is imperative that there is coordinated and concerted action at the national level to support these humanitarian efforts.

For instance, the district administration in Chirang is facing a huge resource crunch and only has 8 ambulances available for 19237 IDPs. Moreover the camps are not clustered in one particular place which makes transportation of patients a logistical nightmare for the district authorities. The largest camps in Chirang are located more than fifty-kilometers from the district headquarters in areas along the border with Bhutan. They are difficult to access due to poor conditions of the roads and due to security concerns night travel is strictly avoided.

Due credit must be given to the stakeholders mentioned above as they are working overtime under severely strenuous conditions. Given the scale of the crisis, it is imperative that there is coordinated and concerted action at the national level to support these humanitarian efforts. It is also important to note that the local district authorities and especially those in the line-departments who are at the forefront of the ongoing crisis actually welcome external help and readily provide the existing information available with them (despite limitations in their own data).

In attempts to bring normalcy back to the region, the entire focus so far has been directed towards containing the occurrence of armed violence. While this is immensely important, an enhanced response to the humanitarian crisis is urgently needed as there are a number of relief camps which are still functional (but without access to relief as the emergency has been declared as over). No civilized country should accept having thousands of defenseless men, women and children living in refugee camps in the peak of winter under tarpaulin sheets without access to bare necessities of life. The moral and ethical questions raised by the crisis in Assam go well beyond the borders of the state and must stir the conscience of the entire nation.

[1]The BTAD is a semi-autonomous region under the Sixth Schedule of the Indian Constitution and comprises of the border districts of Baksa, Udalguri, Chirang and Kokrajhar. It is an extensive area covering 3082 villages. The arrangement was a result of the tripartite Memorandum of Settlement (MoS) signed in 2003 by the Bodo Liberation Tigers (BLT), the Government of India and the state government of Assam.