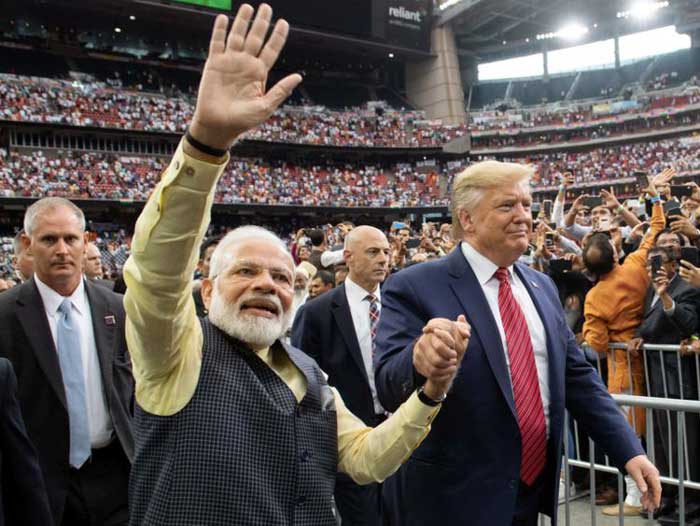 The ‘Howdy Modi’ mega event at Houston’s NRG stadium on September 22 could easily be called ‘Howdy Modi, Howdy Trump’ because while Houston said howdy to Modi, Modi said howdy to Trump, with the 50,000 plus Indian-Americans in the audience cheered both leaders. When White House had announced before the event that Trump would attend the event, our media went gaga that this was a great favour Trump was bestowing on Modi. It sure was an honour for Trump to appear in the event, but as far as ‘favour’ goes, it was reciprocal or perhaps Modi was bequeathing a bigger favour on Trump.  Not only did Modi and Trump praise each other leading the largest democracies of the world, but Howdy Modi offered multiple advantages to Trump.

Organization of the event has been attributed to Texas India Forum but this could have not happened without coordination by the Delhi-based India Foundation, which has been managing all interactions with Indian Diaspora during Modi’s foreign visits since 2014.

Timing of the Howdy Modi event was perfect for Trump; in run up to his bid for a second presidential term. Where else could have Trump been able to speak to 50,000 Indian-Americans together with Modi at his side – and lauding him?

The significance of this must be seen in backdrop of a report that in the previous US presidential elections, about 84 percent of Indian-Americans had voted for Hillary Clinton, not Trump. That is why Trump also made an unscheduled appearance to listen to Modi at the UN Climate Summit on September 23, despite pulling the US out of the Paris Agreement within the UN Framework Convention on Climate Change signed in 2016.

For Trump, the event was also significant because some of the geopolitical levers he has been engineering are not running smooth: talks with Taliban are dead; Pakistan continues to export terror; denuclearization of North Korea looks impossible; regime-change in Iran is not working and billions of dollars worth US arms bought by Saudis proved futile during the deadly Houthi drone attack on September 14 targeting the Abqaiq-Khurais oil facilities.

Prime Minister Narendra Modi’s oratory skills, characteristic individual diplomacy and business acumen were on display at the Howdy Modi event, of which he was fully in command.  Modi introduced Trump as a very special person whose presence at the event signals India has a true friend at the White House. Modi said we in India have connected well with President Trump.

The words of candidate Trump ‘Abki Baar Trump Sarkar’ rang loud and clear and his celebration in the White House lit up millions of faces with joy and appreciation. Modi told Trump “you had introduced me to your family in 2017 and today I have the honour to introduce you to my family, over a billion Indians and people of Indian heritage around the globe”, adding, “Ladies and gentlemen, I present to you my friend, a friend of India, a great American President Mr. Donald Trump”.

Modi made a strong pitch against terrorism, indirectly targeting Pakistan and Imran Khan without naming them. He asked “Where do you find conspirators of 9/11 and 26/11 terror attacks?” and called for a decisive battle against terrorism. He also spoke about removal of Article 370 and that this would usher development in J&K.  Modi underscored his government’s push for development in India, saying it is the most-discussed word in the country. He emphasized that India had boosted America’s economy. This is true with Indo-US defence and other deals in billions. Only a day earlier, America’s Tellurian Inc and India’s Petronet LNG Limited had signed a MoU to negotiate the purchase of up to five million tons per annum (5 mtpa) of LNG from Driftwood, concurrent with its equity investment; to finalize the transaction agreements by March 31, 2020.

Modi also spoke of India’s target to become a $5 trillion economy. This appears distant given present economic indicators and notwithstanding measures like corporate tax cuts that would require making up from elsewhere and spurts in sensex with events like Howdy Modi. Interestingly, the US-India Strategic Partnership Forum (USISPF) estimates bilateral trade is likely to grow from $143 billion to $238 billion by 2025 provided trade grows by 7.5% annually, and could grow to $329 billion if annual growth rate is 10-12.5%.

The question remains has India extracted strategic value from boosting American economy? We called the sanctions bluff by going ahead with the S-400 Indo-Russian deal and are planning joint collaboration with Russia to manufacture S-400 parts in India. So why did we acquiesce totally to stop all oil imports from Iran? The arguments ‘give some, take some’ apart, could we have not kept part of the oil imports going from iran in our own national interest?

Trump said, “We are committed to protect innocent civilians from the threat of radical Islamist terrorism. India and US also understand that to keep our community safe, we must protect our borders” amidst Modi clapping and standing ovation from the audience. But when Trump speaks of Islamic terrorism, his focus is Iran, not Pakistan. As for protecting borders, he spoke of action to secure the border with Mexico and stopping illegal immigration.  Trump praised Modi’s economic reforms and said these have lifted more than three million people out of poverty. He also praised his own government’s economic record including 70,000 new jobs in Texas. He applauded the Tellurian-Petronet LNG deal that could lead to billions of dollars. Trump described Modi as a great man, a great leader and his friend.

Trump mentioned the forthcoming first-ever Indo-US tri-Service military exercise, saying, “In November, the United States and India will demonstrate significant progress in the field of military cooperation and hold the first military exercises.  In the USA, we created space troops.  We work closely with India in developing space cooperation.” He also said that many more defence deals between US and India are in the offing. He then praised the contributions of the Indian-Americans, saying they have enriched “our culture and uplifted our values.”

The Indian Diaspora in the US very significant given its increasing political heft and centrality of the US in India’s strategic architecture. But it is also a fact that Diasporas, being a particularly sensitive component of global politics, have their own identity and aspirations. This applies to the Indian-Americans as well who are in better positions to distinguish between true intentions and political statements despite the propaganda overload. Their enthusiasm for Modi at Howdy India notwithstanding, aspirations of the Diaspora and the priorities of Howdy India may not converge for those who read Trump’s expressions throughout the victory lap, not counting occasional display of bonhomie and waiving.

Trump didn’t give any hint about liberalizing immigration despite the vote-bank supreme on his mind. It is for this reason that Trump only mentions ‘Baby Tourism’ but doesn’t act despite China cashing on it fully. For that matter, where 50,000 plus Indian-Americans congregated for Howdy, Modi, an equal number of Pakistani-Americans also inhabit Texas.

Much became apparent from the meeting that followed between Trump and Imran Khan, Pakistani PM. Trump never got down to asking Imran why Pakistan is continuing to export terrorist to India and Afghanistan but instead said, “I don’t think you’ve ever had a president that felt the way I do, in a positive way, about Pakistan.  I don’t think you have.” He also offered for the third time to mediate on the Kashmir issue, saying, “I have very good relationship with Modi and Khan. I can be a very good arbitrator.”

Despite India emphasizing that Kashmir is an internal issue, Trump keeps looking for every possible lever to boost him politically. Snubbing a Pakistani journalist during the joint press conference may tickle our media but that is dumb euphoria. This is amply clear from Trump’s response when asked whether Pakistan is the hub of terrorism. He said, “Well, I really have been pointing much more to Iran.”

Worse was hundreds of Pakistanis, Khalistanis and so-called human rights organizations staging protest rally in Houston condemning India for  human rights violations in J&K and chanting outside the Howdy Modi venue “Go back Modi” and “Modi is a terrorist”. According to ABC News, Justice for All, an interfaith human rights group, and its allies had organized the protests. It appeared that Mayor of Houston Sylvester Turner, was competing with Sadiq Khan, Mayor of London in facilitating anti-India protests under cover of free democracy, even as Turner handed over the key of Houston to Modi. How was it America’s ‘deep state’?

Pakistan unambiguously views the Kartarpur Corridor an opportunity for terrorism and narcotics smuggling. Canada, another Khalistani stronghold has already announced the World Peace Bus from Canada to Kartarpur Sahib 550th ‘Prakash Purab’. How many Khalistanis will avail the bus service is not known with Khalistanis in the team of backface-cum-brownface Justin Trudeau.

No doubt India views the US crucial in helping India meet its economic and strategic aspirations. But this should not mean accepting every US demand. Modi and Trump both have good trade sense but will Trump accord any economic concessions to India despite India having toed the US line on Iran? As for India’s strategic aspirations, the thorn in the flesh is Pakistan. But the US is unwilling to go beyond cutting off aid, even as Pakistan getting placed on FATF’s blacklist will not force Pakistan to give up its policy of terrorism; revival of JeM’s Balakot terrorist training facility and hundreds of terrorists waiting to infiltrate into India indicate this.

Finally, time will tell how much Howdy Modi will benefit India and the US as unintended outcomes of the event may be more complex than visualized with US stance on Pakistan unchanged. It is time for cool-headed dispassionate analyses beyond the hyperbole.