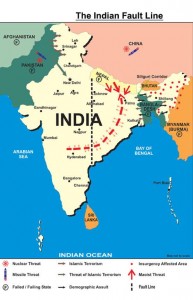 Although one year is too short a period for trending a serious subject like National Security, nevertheless speculating the immediate trends may be a useful exercise under the existing realities, because in the environment of high voltage political scenario in the country due to 2019 elections, the National Security tends to get off the thinking radar of some decision makers.

China Factor     With the advent of US-China trade war, which is likely to continue in 2019 as well and reset of China India relations with Wuhan ‘Informal Summit’ the relations between China and India seem to be getting better than the previous years, when bitterness between both countries over Doklam Crisis had touched a new high. At this point China needs good relations with India, to ensure that India does not get into US club as well as economic and other reasons like peace and tranquility on borders, to concentrate on South China Sea and Eastern seaboard. This honeymooning is however, temporary, till such time China is under pressure from US.

Although decision making in India will be affected in first six months of 2019, due to elections, but from international point of view, this is the ideal time for diplomats to make some progress…

There is going to be no change in Indian differences with China on border issue, BRI/CPEC or South China Sea. I do not expect any worthwhile development on border issue, which is very complex, but some agreements on delimitation leading to demarcation of LAC, to prevent a repeat of Doklam like incident is doable, if the political will exists on both sides.

Although decision making in India will be affected in first six months of 2019, due to elections, but from international point of view, this is the ideal time for diplomats to make some progress on delimitation and demarcation of LAC, as China can be expected to control its adventurism during Trade War. We can thus expect a relative quiet period on Chinese borders, with some positive steps for better border management, so long the Trade War continues, and Chinese remain under pressure of economic slowdown.

Pakistan Factor    In 2019, I do not visualize any dramatic change in Pakistan’s behavior. The terror industry and proxy war will continue, notwithstanding the perceived economic difficulties which have been in news in 2018, because whenever they are on the verge of sinking, some country will bail them out to foster its own interest through them because of their strategic location/terror potential. It may be interesting to note that their terror industry is mainly sustained by parallel economy involving drug trade, extortion and assistance from ISI, with material and operational support from Pakistan Army. Pakistan in fact has earned out of this industry, besides launching proxy war against India and Afghanistan.

As the security situation unfolds in Af-Pak Region, I will not be surprised if Taliban, which was decimated by Multi-national Forces, but nurtured by Pakistan, may be in driving seat of power in Afghanistan(Much against Indian interest), and US may have no option but to silently end their pursuit against them acknowledging Pakistan as one of the main broker. The efforts of FATF and IMF may show some check on the formal economy, but not the terror economy, as the linkage between the two is not as tight as it is made out to be. Pakistan is well used to international isolation, hence UN declared terrorists will continue to spit venom and plan terror operations against India in 2019.

CPEC will make Pakistan a colony of China or enter into a client- Patron relationship, where strategic choices of Pakistan will be hostage to China.

Sino-Pak Nexus    The progress on CPEC will continue despite Indian opposition, some domestic opposition inside Pakistan, although, globally BRI will continue to face many roadblocks. CPEC will make Pakistan a colony of China or enter into a client- Patron relationship, where strategic choices of Pakistan will be hostage to China. This brings out a long term threat to India in terms of ‘Two-front war’ which India has to prepare, as it has been neglected for many decades so far.

Kashmir    In 2019, the situation in Kashmir valley may be relatively peaceful for some time during President’s rule.  On expiry of the same, there will be tremendous pressure on the Central Government to start the democratic process, even if adequate stabilization has not taken place. Various interests groups of Kashmir including political parties, who benefit from a disturbed Kashmir, may be instrumental in getting the fresh spate of violence in Kashmir Valley.

Incidentally Jammu, Ladakh and some part of Kashmir will continue to be peaceful and only a handful of districts, sympathetic to militants will continue to bleed due to terror actions. Unless some convictions of separatists happen, they will continue to enjoy, because investigations and temporary arrests do not matter to them.

The security forces will have to continue fighting infiltrators, terrorists (Foreign as well local) because terror industry will continue to be a lucrative industry, having a role and salary package for everyone including stone-pelters, crowd managers, money launderers, informers and many more. The biggest vulnerability deterring security forces in terror operations supported by stone pelters will be false allegations and some segments of human right organizations, legal fraternity, politicians using it to their advantage.

The infrastructure development there will have little impact because the state is quite high in per capita income and infrastructure amongst other states in the country.

The infrastructure development there will have little impact because the state is quite high in per capita income and infrastructure amongst other states in the country. Scholars who quote theology/religious reasons for disturbance forget that no-one in Pakistan and Kashmir Valley speaks a word when Uyghurs are not allowed to practice some Islamic rituals and kept in re-education camps in Xinjiang (China) showing priority of money over religious brother in. 2019 will also see some more innovative methods of infiltration like rivers, sea routes and by air through countries where visa regulations have been relaxed.

North Eastern India     We can hope for a developing North East in 2019, with declining insurgency. Except for some parts Manipur and adjoining areas the region is showing keenness to grow. With friendly Governments in power in adjoining countries, North East may not be a major security concern.

Red Corridor/Naxalites     The problem in these areas relates to poor governance and its intensity will increase/decrease depending upon the quality of governance provided. There have been changes in Government in some affected states and some may go to polls next year. Depending upon the governance provided by them and lessons learnt by security forces operating there, the magnitude of the problem can be expected to vary in either direction in 2019. The police forces dealing with it need to have modern equipment, training including leadership training at grass root level.

What Should India do to meet these Security Challenges?

With rolling out of CPEC, and need to do something different to generate nationalism by China amidst slowing down of economy, the clouds of ‘Two Front War’ are hanging over India, although it may not happen in 2019. The only way to avoid a ‘Two Front War’ is to convince the potential adversaries that India is capable of fighting it. This convincing cannot be by announcements or statements by leaders, but by building/proving capability to do so.

Unless Pakistan is deterred, the proxy war will continue hence India has to be with ‘Offensive’ intent and capability to achieve it, not on ‘Offensive Defence’ mode.

For many decades governments in power claim to be giving highest priority to national security but acting otherwise by minimizing the defence budget, which clearly gives out what kind of capability in terms of military hardware the nation can generate and where does the national priority lies. Chanakya, Clauswitz, and Sun Tzu, have said one thing in common that no nation can expect to be great and secure unless it has powerful Military, which can deter potential adversary.

Unless Pakistan is deterred, the proxy war will continue hence India has to be with ‘Offensive’ intent and capability to achieve it, not on ‘Offensive Defence’ mode. If capability exists then intentions can change overnight makes adversary jittery. Achievements like 200 to 300 militants killed or surgical strikes are commendable brave acts, but the need is to deter them to stop infiltration and deal with domestic enemies firmly. The nation has to be ready for it, not only the military as was the case in 1971 war.

India has some decision makers and beaurocrats, who create a perception that since war is not likely in near term; hence capacity building can be a lower priority. We also have a set of diplomats who assure the decision makers that they will be able to prevent war, which leads them to Pre-1962 scenario. None of these categories realize that defence capabilities take long time to build up, more-so if India does not have strong Research, Development and manufacturing base. ‘Make in India’ and self reliance is essential but time consuming, should continue simultaneously. The defence budget allocation made in 2018 will have to substantially increase in 2019 in the interest of national security. Defence Procurement is already a slow process, which will become even slower, if it’s drawn into political gaming for 2019 elections.