How not to deal with Pakistan 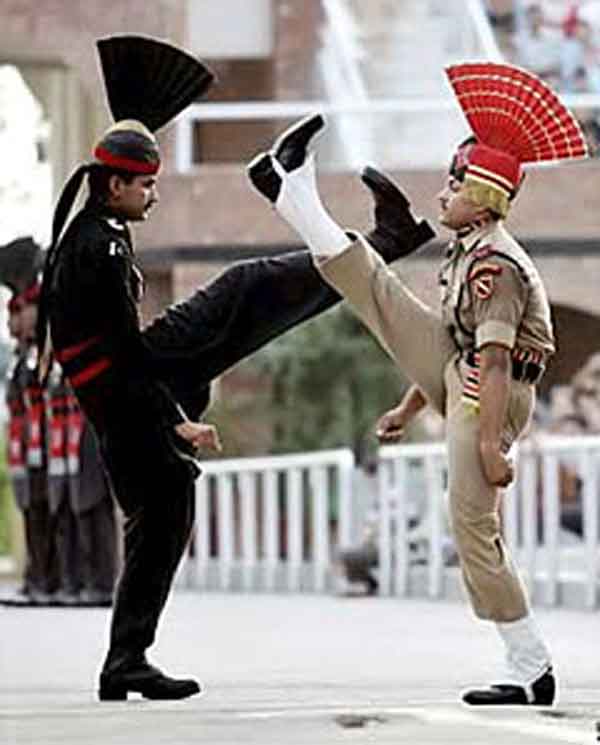 The dastardly act on the part of Pakistan Army on the LOC by ambushing a night patrol of 21 BIHAR and killing five soldiers is not only condemnable, but absolutely unacceptable in terms of soldierly behavior of civilized armies when there is a ceasefire agreement in force on the LOC.

Suitable and adequate retaliation will take place, but the point is “How long shall we continue to tolerate this uncivilized behavior from Pakistan?”

Unfortunately the Indian Defence Minister has given it a different colour by calling the marauding troops as terrorists in Pakistan Army dress. It seems as if St Antony is the spokesperson of Pakistan. Hiding facts to deny accountability is an old trick of Pakistan. They tried it in 1947 in J&K in the guise of Kabalis, later in 1965 during Op Gibraltor, and even more brazenly in the Kargil War. How is it possible for terrorists to come thru Pakistan lines on the LOC with all the arms and weapons, carry out a raid and then exfilterate thru the same route without being challenged by the post. It can happen only in coordination with the Pakistan Army and that too under highest commander orders. Besides, such actions are not done by terrorists, they are the responsibility of BAT ( Border Action Teams) of Pakistan army that are part of the SSG group (commandos) So Mr Cleanchit needs to get his facts clear and stop batting for Pakistan.

Indian Army is no walkover. Pakistan has suffered four defeats at the hands of the Indian Army, and yet like a shameless bully continues to try new tricks and gloat over it. Suitable and adequate retaliation will take place, but the point is “How long shall we continue to tolerate this uncivilized behavior from Pakistan?” Here I am purposely putting the onus of respal’ But quonsibility on Pakistan, i.e. its government and the people, as no people and its government has any moral right to be in power if it cannot command its army. But if this act was done with the approval of the government, it is even more reprehensible. Pakistan cannot take shelter behind the old cover of ‘Pak Army law unto themselves’. Then what is the democracy and the rule of civil government completing its full 5 years term and new democratic government in place stuff made of?

The nation is angry and demands action For Government of India unfortunately, it is just another incident and perhaps an acme., or ‘Business as usual’. But question on everyones lips is “How long shall we suffer at the hands of this uncivilized neighbor?” We are told that unfortunately we do not choose our neighbours and have to make the best of them, or live with the worst relations. Some say we are obsessed with that country, and wish us to treat Pakistan with benign neglect. They miss some important compulsions. Pakistan is determined to confront us bilaterally, regionally and internationally. It inflicts wounds on us, through jihadi terrorism using non state actors. Terrorism as part of state sponsored policy has been used against us for the last three decades, since Bhutto declared a thousand years war and Zia put in place his ‘thousand cuts’. Zia had also got a Brig S Malik Pak army to do research on jihadi war and write a book “The Quranic Concept of War” (available on net). This is most revealing, where ‘terror’ is to be not only the means but the end, not the weapon, but the ‘result’. Spread terror in public through violence, propaganda, communal rioting and every means available, particularly among soft targets like women and children. It is a text book in Pakistan army.

Spread terror in public through violence, propaganda, communal rioting and every means available, particularly among soft targets like women and children. It is a text book in Pakistan army.

As per Pakistan Army thinking Jihadi Islam has been at war with Hindustan since 711 when Mohd Bin Qasim landed in Sind. This has continued unabated since, till it acquired new country of Pakistan, ‘Two Nation Theory’ is very much alive and continues to be the main drive towards hatred of India. As per Pak Army they are determined to continue the war to destroy Hindustan and convert it to Pakistan. Kashmir is the first step in that direction. It is only that India does not understand this and thus takes no serious action to guard itself.

Every Pak soldier is brainwashed to be ‘Ghazi’ and to remember that they are perpetually at war with India. Pakistan acquired nuclear weapons before India did with the purpose of not deterrence as nuclear weapons are for, but for war fighting. It has added tactical nuclear weapons to that now to make conventional or sub conventional war redundant. Pakistan feels that under the umbrella of tactical nuclear weapons, it can now carry on jihadi terrorism unabashedly, depriving India of any military response. While we feel that it is the Pakistan army as the core confrontationist, the truth is that the cilvil government and the population is not far behind. This has been so now for over 65 years , though the world has moved on but Pakistan remains rooted in the same confrontation. All the ‘Aman ki Asha’ and the Track 2 diplomacy are only tools to fool us and to find enough peaceniks who can be tutored to speak Pakistan language.

So to expect any dramatic change as and when and if ever, Pakistan army is brought under effective control of the civil government, is a farfetched dream Do not forget that Pakistan was created not by the Pakistani military but by its political class. The political sentiments rooted in the two-nation theory have not disappeared even if a section of the Pakistani polity can have a more pragmatic and cooperative view of relations with India Unfortunately, even in India the ‘Two Nation Theory’ continues to thrive in the form of ‘appeasement ‘ of minorities..

Our biggest problem in dealing with Pakistan has been our permanent inconsistency We have never held Pakistan to its commitments, and permitted them escape routes. Not going into details of the old fiascos, suffice to say that starting 1947 when we could have drubbed Pakistan adventure into Kashmir right there and recaptured J&K territories under Pakistani occupation, we succumbed to British pressure and went to the UN. In 1965 we returned Haji Pir connecting Uri and Poonch back to Pakistan to please Gen Ayub Khan. In 1971 at Shimla we returned 93,000 PWs without any pre condition or solving our outstanding issues with Pakistan, not even getting our own 54 PWs back So our past has been so magnanimous to Pakistan that we cannot now break away from that tradition. He is the younger brother, deserves all the favours and his mischief is to be tolerated What misfortune for a great nation to be led by pygmies who cannot think of the nation, but only their own party and vote banks.

Every Pak soldier is brainwashed to be ‘Ghazi’ and to remember that they are perpetually at war with India.

As a result of Op Prakaram, In 2004 Pakistan committed itself to not allow terrorist attacks against India from territory of Pakistan or under its control, But we discarded this linkage later by continuing our dialogue despite a series of Pakistani abetted terrorist attacks, and worst was to formally delink dialogue and terrorism by proclaiming in a joint statement with Pakistan at Sharm el Sheikh in July 2009 Worse, the former Pakistani interior minister on a visit to India in December 2012 gave a slap on our face when he bracketed the Mumbai attack with Babri Masjid and imputed it to the handiwork of an Indian intelligence contact and non-state actors in Pakistan We accepted responsibility for the Samjhauta Express attack in our joint documents Political rivalry made our own Home Ministers make absurd statement about “saffron” terror, and BJP run training camps The recent CBI-IB wrangle over the Ishrat Jehan incident is now feeding the Pakistani propaganda machine on 26/11, even more We remain our own worst enemy.

Numerous examples of own government scuttling our initiatives to show Pakistan for the Jihadi terrorist that it is, has got frustrated due to domestic reasons. We continue to look at Pakistan as the guardian of our Muslim minority, with the result that no strict or concrete steps are taken to bring the jihadi terrorism under control. It is felt that any tough stand against Pakistan will have adverse effect on ‘vote bank’, and thus soft pedaling Pakistan attacks, particularly with 2014 elections next door. Pronouncements like that borders cannot be changed but can be made irrelevant has meaning only with friendly neighbours On Siachen also we weakened our position by proposing at the highest political level to convert it into a mountain of peace, and even succumbing to a track 2 proposal for withdrawal.

As for talks, comprehensive or any other type, it is exercise in futility In this the basic problem with our policy makers is that they do not wish to acknowledge the dominant role of Pak Army in pursuit of their nation’s objectives, which are solely Islamic oriented aimed at dismemberment of India. Our leaders think that mere discussion with Pak political leaders will resolve issues; whereas these negotiations are honoured neither by the Pak Army nor the militants.

…we first need to put our house in order, improve our internal security, stop playing vote bank politics with the issue of terrorism…

Pakistan’s policies are conditioned by the basic antipathy, distrust and sense of rivalry towards India. The Islamic roots of Pakistan and differences with India rooted in religious ideology remain a huge obstacle. Pakistan’s hostility is anchored in the “idea” of Pakistan based on ‘Two Nation Theory’ unless that theory is buried deep, peppering over differences will not suffice

To deal with Pakistan we first need to put our house in order, improve our internal security, stop playing vote bank politics with the issue of terrorism, put our economy on a high growth rate again and let Pakistan stew in its own economic muck. Keep the dialogue with Pakistan on back burner and unless Pakistan shows evidence to progress cases and stop terrorism we remain hibernated for talks. Abjure language that equates Pakistan’s problem with terrorism with ours, prevent the Kashmiri separatists from meeting Pakistani politicians and diplomats in Delhi or Islamabad, cease discussions on Siachen, enhance trade contacts if Pakistan desires, but avoid romantic ideas about people to people contacts. They do not work.

4 thoughts on “How not to deal with Pakistan”