How India Fools Itself 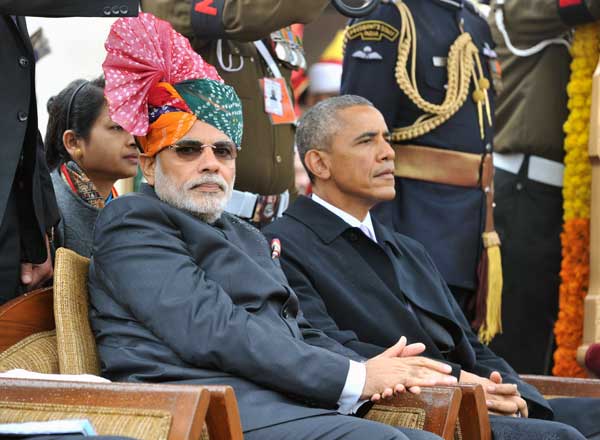 It was amazing how much President Obama figured in the headlines of daily newspapers in India for virtually 2-3 days. India was over the top because Obama was watching India’s most beloved Republic Day Parade; Michelle Obama’s dress was designed by an Indian fashion designer; and so we felt we had the first couple cornered. It felt like a great achievement for India, having hooked the world’s biggest and most coveted fish from out of international diplomacy. It was the icing on the cake to Modi’s tour of the USA, where he impressed everyone by going through a grueling meeting schedule while fasting. After so many world leaders have been chief guest at the Republic Day Parade – of Japan, Russia, Britain – even Pakistan and China – that having USA was the pinnacle of achievement.

ABC, CBS, NBC didn’t even show a clip of Obama at the parade on their evening news, let alone show India’s parade of armor. India was clapping as if with one hand only.

Obama’s visit sought to put China in its place; show Russia that we could buy arms from elsewhere after their overcharging the Vikramaditya and delivery delays in just about everything else; confirm to the European Union that we were really friends with the West so as to earn trade concessions from them; warn Pakistan and put it on notice; affirm to Japan we were friends with those who protect its sovereignty and integrity so that the Japanese would invest more in India; and show to Australia that we were in the right camp so that we could get all the minerals we need without which we would be dead in the water.

To give credit where it belongs, all that was successful, though for how long others will remember it is still to be seen. But, it was watered down by the fact that in the USA, where Obama is trying hard not to look like a lame duck, newspapers in cities other than New York and other main cities hardly carried the news of Obama’s visit with much importance. In Honolulu, the headquarters of the world’s largest military command, Modi’s visit was relegated to a small article in the international section. Even Michelle Obama’s visit to tiny Cambodia in March drew a larger article than any for India during Obama’s visit. Though Obama preponed his talk to Congress so he could attend the cast-in-stone date of January 26, which was a forceful statement, the news media barely carried much more than a quick mention of Obama’s visit to India. ABC, CBS, NBC didn’t even show a clip of Obama at the parade on their evening news, let alone show India’s parade of armor. India was clapping as if with one hand only. There were no cheers for Obama in USA for visiting India. While India cares so much for USA, the Americans don’t give equal importance to India by a long shot. And that’s totally understandable, for the USA has many big things to worry about, but India wishes to demand US attention like a small child its parents.

Yet, India fails to realize that India’s standing on the world stage is so insignificant that after one year into his Presidency, President Bill Clinton termed India as “the most unimportant nation in the whole world.” Indians fail to realize this train of thought, and wonder what they have done to earn USA’s neglect when they pine for the US so much. They wonder why the USA would not be friends with the great Indian civilization that gave the world so much, including the much-loved Kamasutra. And, inspite of this statement of Bill Clinton, they welcomed Clinton in India like he was India’s best friend. And though, in the year 2000, George Bush stated on his campaign trail that he saw “India as a strategic partner, and China as a strategic competitor” in contrast to Al Gore who saw China as an ally, and India as a detractor, Indians still wanted Al Gore to be elected. It’s amazing how India fools itself so much, but India has done more than just this to fool itself.

…countless Indians consider the USA the real enemy or cancer in the world, ahead even of China. And so, the USA sees through, while India fools itself into thinking that it has won over the USA.

Starting with the infamous rant by Chacha Nehru that he didn’t need an army, India has been fooling itself ever since, refusing to face reality, and refusing to play ball in a world that demands cooperation to advance. Nehru’s role in the Korean War, where he acted like a self-appointed arbiter of right and wrong irked the US. But, Chacha probably thought that if he could kick the British out of India, the previously most powerful nation in the world, he could dictate to the world on morality and justice. Not so. After Chacha moved close to the Chinese communist camp, opposed to Chiang Kai Shek who the US supported, the US became more suspicious of India. The final straw for the USA was when India’s ambassador Panikkar delivered China’s message in 1953 to the USA not to advance beyond the 38th parallel[1]. Suddenly, India was perceived as a newborn, wannabe nation that was trying to punch above its weight. This firmly convinced the USA that India was not a country they could rely on or do business with.

Everything else after that took India away from the United States: India became a leader of the non-aligned movement that sought to shock the white man’s sway that had colonized the world. After India adopted the Russian system of central planning, USA was more aghast, and clumped India with the commies. At this point, India was still fighting the anti-colonialization battle on behalf of all colonized countries. This was probably all that India’s government knew to do, having little idea of technology and development, but having great pride in themselves. That said, it was, no doubt, a noble fight, but which, in retrospect, denied India pride of place by denying it the technology that was necessary to have pride of place. Only the strong have pride of place in the world club of power, while the weak are not allowed entry there.

The taste of India having till recently been in the Russian orbit hasn’t quite gone away in the American mind. Just like a whole generation of India has grown up with animosity to the USA, so has a whole generation in USA. The spouse of a former American military commander told me that after China, India was next on the countries the US had to bring down owing to its anti-USA stance. And this type of thinking in the American mind has been very slow to go away, but not without reason, because countless Indians consider the USA the real enemy or cancer in the world, ahead even of China. And so, the USA sees through, while India fools itself into thinking that it has won over the USA.

With lackluster growth and high unemployment, India saw the rise of unionism, where strikes and protests were quite an everyday affair…

The subject of adopting modern technology was particularly hanging in the balance when Nehru rejected the atoms for peace initiative of President Eisenhower. Yet, India chose the path of pride with no substance, rather than choose the path a meek person would rightfully choose. Everything that India did after that appeared to be opposed to the US, even though India was shooting itself in the foot. On the one hand, it appeared to India it could go it alone in technology because an IMF report of 1948-49 judged India to be the most industrialized in Asia out of the fully sovereign countries (Japan was a conquered nation).But, that was fooling itself. The West had recourse to important warfare and production technologies that India had no knowledge of. This dampened Indian engineering output, which came back to haunt India. Two generations of engineers grew up in the shadows of the real technology.

With lackluster growth and high unemployment, India saw the rise of unionism, where strikes and protests were quite an everyday affair in the 1960s. Rejecting modern engineering technology put India back by 50 years, which is why its defense production system is having such a tough time now. Time after time, India fooled itself on the realities of the world, and the US was happy to let India slide because India was no friend of the USA.

Today, things are still not back to normal. While overtly India wants deep strategic friendship with the US, and their modern armaments, and well-to-do Indian families do everything to send their children to the US, these same Indians talk negatively and angrily of the USA. In private chat rooms and drawing room conversations, the jealousy and hate exhibited by Indians against the US is all too evident. The Americans observe and realize this, hatha yoga and Vedic philosophy notwithstanding. India votes against USA for climate change, steals intellectual copyright from USA, exports adulterated medicines to USA, supports Arabia when USA supports Israel … and so on.

So, why should the US pander to India when India carries only one vote in the United Nations? The same kind of vote that Saudi Arabia carries, but which gives returns to the US.

14 thoughts on “How India Fools Itself”