With 12 more hovercraft likely to be inducted in the Coast Guard in the next three years, the agency’s eastern region is likely to purchase two such craft at a cost of Rs 8 crore each and base them off Chennai to improve security along the coastline. 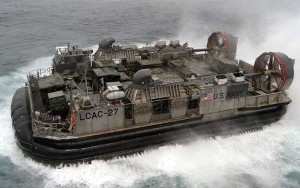 The Coast Guard already has six hovercraft – four in the West and two in the East. 12 more are under construction. Apart from the two for Chennai, the Coast Guard’s eastern region is planning to purchase two each for Rameswaram and Puducherry.

The hovercraft in Chennai will enhance Coast Guard’s capability to respond quickly and meet any eventuality. Of the Coast Guard’s six hovercraft vessels, two have been positioned in the West in Okha, two at Haldia, West Bengal, and another two at Mandapam.

Hovercraft have been utilised for landing troops on shore, to cruise over mined waters or as passenger liners/freight carriers. In the military, these can be used for fast attack, assault missions, logistics support and also for mine clearances.

A hovercraft can manoeuvre over marshy land, desert and undulated surface, and can pass over an obstacle of up to a specified height. The hovercraft is powered by two 12 cylinder air-cooled turbo charged 800hp engines.

One thought on “Hovercraft for Indian Coast Guard”