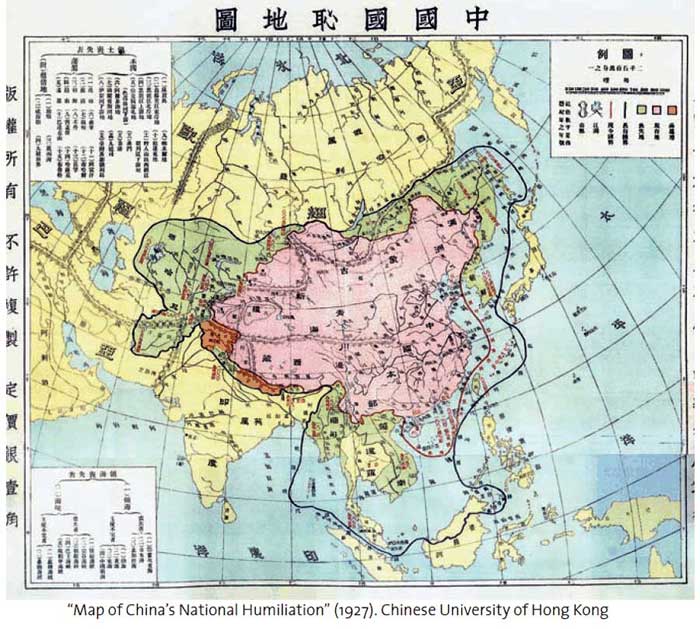 Like a debutante in the global arena, China has been particular about its national image. After decades of revolutionary diplomacy that challenged the international system, the Peoples Republic of China (PRC) has worked hard to ease the concerns of countries that used to be targets of its revolutionary activities. It is now consciously projecting a savvy national narrative. It has taken care to reword its “rise” to “peaceful rise” and beyond that to an even more mild term – “peaceful development”. It visualises an important role for itself in creating a “harmonious world” and thereby presenting an image of a cuddly panda rather than a fire snorting dragon.

Chinese official maps are ‘imaginative’ and often ‘fictional’, inscribing territories that are not under state control…

Maps are an important aspect of the continual self-crafting of any nation’s image. Drawing and redrawing boundaries is symptomatic – partly aspirational and part aggressive assertion. There was no term in Chinese language to define sovereignty till the nineteenth century. Today sovereignty refers to supreme power over a group of people and territory, a Western concept originating with the Peace Westphalia in the seventeenth century.  An American missionary WAP Martin is generally credited to be the first person to translate this in to an East Asian language. He did so in 1866 using four characters which meant “the right of self-mastery” or “the right of autonomy”. In the late nineteenth century the idea was picked up by Chinese reformers like Liang Qichao. While the concept was easy to understand it was an extremely difficult concept to apply to China, which was then ruled by the Qing Dynasty. The Qing Dynasty brought many different ethnic groups under their control, and through campaigns of conquest they extended their control, particularly towards the west, over an enormous territory. Finally, beyond the areas that they controlled themselves, they claimed authority over numerous tributary states.

This was thus an international order of states that differed from the Westphalian order of nation-states. First, the Qing Dynasty empire was not a nation-state. Second, its relations with its neighbours were not based on recognition of equality.  However, despite this conflicting reality China gave historical backing to its boundaries. It also added the mournful loss of ‘national territories’ through this deft ‘cartography of national humiliation’. 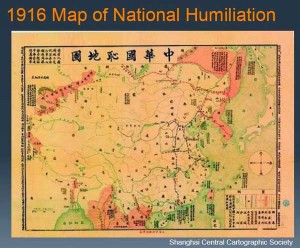 Chinese official maps are ‘imaginative’ and often ‘fictional’, inscribing territories that are not under state control – but could and ‘should’ be part of China’s sovereign territory: PRC maps record Taiwan as a province of China and until recently Republic of China (ROC) – Nationalist Government – maps included Outer Mongolia as Chinese territory as well. Of late, China has been showing Arunachal Pradesh (less the districts south of the Brahmaputra) and Aksai Chin region of Eastern Ladakh as Chinese territory. This amply illustrates how national maps are not simply cartographic reflection of territorial space but subtle instruments of power employed for political projects.

Since China controls all information. It feeds only that to its people that it wants them to know. It portrays itself as a victim of imperialist designs in the delineation of the McMahon Line…

Here I would subscribe to what William A. Callahan propounds, that maps and cartography are political practices that seek to produce what Thongchai Winichakul calls the national “geobody” which is “….not merely space or territory but it is a component of the life of a nation. It is a source of pride, loyalty, love, hatreds, reason and unreason”. Thus maps arouse nationalism and can mobilise masses. China has adopted such a strategy with regard to Arunachal Pradesh and Aksai Chin. Since China controls all information. It feeds only that to its people that it wants them to know. It portrays itself as a victim of imperialist designs in the delineation of the McMahon Line and thereby denying it staking its claim of territories south of the Line. A blatant illustration of irredentist belligerence!!

William A. Callahan in his study of these Chinese maps from the twentieth century found many maps that essentially combine the idea of China as a modern sovereign nation possessing clearly defined national borders with the pre-modern concept of China as an unbounded domain at the centre of a hierarchical world order. He calls these maps as “national humiliation maps” and they were meant about what China “should” look like. These maps were thus not “real” but the emotions they evoke certainly are. 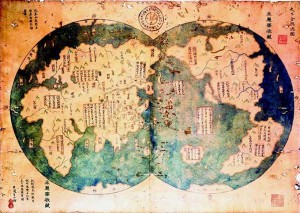 One of the first such maps was created in 1912 by the then newly formed government of ROC. In these maps the national borders were not clearly defined. Further, next to the territories which had formerly been states that paid tribute to the Qing Dynasty, had comments indicating the status such as – “Originally belonged to our kingdom/country now it belongs to ……” (Japan/France etc). Then there is this map of 1927, entitled “Map of China’s Nation Humiliation”. This map does indicate “clearly defined borders” of sorts.  A red line indicates China’s current borders at that time (what ROC claimed as its current borders), while a black line indicates “lost territories”.  A 1914 map blatantly lies about the extent of Qing control to legitimate its claims by locating them in parts; these were expansionist fantasies in cartographic form. In a way acceptance of these maps has become a barometer for measuring patriotism. In today’s China all school children can look at this map of “National Humiliation” and feel for their ‘nation’s’ losses.

The ROC map of 1946 showed Sulu Island (Philippines) and a good chunk of Russia and J&K province of India as parts of China. It should not come as a surprise if China starts claiming central Asian states as inhabited by “Chinese” people.

A Chinese scholar Liang Qichao noted in 1900, that the Qing Dynasty’s domain was not a nation. However, since then Chinese intellectuals and political leaders have worked hard this last one century to transform what was once an empire into a ‘nation’ and to make the boundaries of this ‘nation’ seem natural and uncontested. They had to create the idea of the Qing Court possessing “supreme power” and that implied “sovereignty” over the tributary states which ostensibly automatically extended to these states. Since the concept of “nation state” and “sovereignty” were not of Chinese origin these were suitably incorporated in their vocabulary with the necessary tweaking.

It would not be out of place to dwell a bit on this concept of “National Humiliation”. According to Callahan, it was Yuan Shaikai’s (the autocratic first President of the ROC) acceptance of Japan’s “21 Demands” that brought out the first stirrings of “National Humiliation” – a project of private protest against the governments sell-out of the nation led by National Teachers Association. This gave the government a plank to exploit and it in turn adopted the national humiliation as the guiding ideology, with the production of textbooks and historical narratives that followed as early as July 1915. After the Nationalists consolidated and asserted their position in 1927, they declared May 9th an official “National Humiliation Commemoration Day”. The next year they put out a calendar with twenty six National Humiliation Days in a given year. But to convince the population of a large loosely held empire that could disintegrate under warlords, it was this idea of being victim of history that became the binding theme of nationalism.  So much for the baloney of “National Humiliation”. 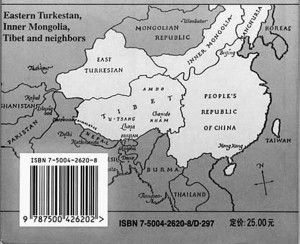 In 1938 the government authorised production of an elementary school map recreating a fantasy China that actually owned the ‘nations’ that had sent tribute to the Qing emperor’s court. The maps note that Laos, Cambodia, Vietnam and Korea are “lost territories” awaiting “reunification”. Similar fantastic claims exist in the East China Sea and South China Sea. Analysing Chinese history in terms of the idea of “national humiliation” is a stark indicator of Chinese expansionist designs. The ROC map of 1946 showed Sulu Island (which are now a part of Philippines) and a good chunk of Russia and Jammu and Kashmir province of India as parts of China. It should not come as a surprise if China starts claiming central Asian states as inhabited by “Chinese” people.

Indian traders also sailed east to the shores of Java, Cambodia and Bali. Thus the Indian world stretched far beyond its borders and India never used violence to spread her influence.

India, situated at the central point the ocean that washes on its coasts on three sides, seemed destined very early for a glowing maritime future. In the Rig Veda, a passage (I. 25.7) represents Varuna having full knowledge of the sea routes, and another (L. 56.2) speaks of merchants going everywhere and frequenting every part of the sea for gains. The Ramayana refers to the Yavan Divpa and Suvarna Dvipa (Java and Sumatra) and to the Lohta Sayara or the Red Sea. The dramas Sakuntala, Ratnavali of King Harsha, Sisupalvadha of Magha relate to stories of sea voyages of merchants.

Historian RC Majumdar states: “The representation of ship on the seal indicates maritime activity, and there is enough evidence to show that the peoples of Sindhu Valley carried on trade not only with other parts of India but with Sumer and the centres of culture in West Asia and with Egypt and Crete.” Indian traders also sailed east to the shores of Java, Cambodia and Bali. Thus the Indian world stretched far beyond its borders and India never used violence to spread her influence.

Sir Aurel Stein (1862-1943) a Hungarian, whose valuable researches’ have added greatly to the image of “Greater India” remarks: “The vast extent of Indian cultural influences, from Central Asia in the north to tropical Indonesia in the south, and from the Borderlands of Persia to China and Japan, has shown that ancient India was a radiating centre of a civilisation, which by its religious thought, its art and literature, was destined to leave its deep mark on the races wholly diverse and scattered over the greater part of Asia.”