On October 7, 1950 the PLA’s Second Field Army marched into Eastern Tibet to ‘liberate’ the Roof of the World. Several factors can explain this move.

A few days after the beginning of the invasion, the Xinhua News Agency issued a communiqué that the PLA would soon achieve “the task of marching into Tibet to liberate the Tibetan people, to complete the important mission of unifying the motherland, to prevent imperialism from encroaching on even one inch of our sovereign territory and to protect and build the frontiers of Motherland”.1 This enumerates some of Mao’s motivations.

The historian Warren Smith has quoted a Scottish missionary called Beatty working in eastern Tibet, who was told by a PLA officer that “large numbers of yak, wild and domestic animals would be needed to feed the PLA troops [in Tibet]. The PLA officers and men talked of going on to India once Tibet was in their hands.”2

By colonizing the Roof of the World, Mao demonstrated to the world who the real leader of Asia was, while showing simultaneously that India was incapable of defending a smaller country; thus Nehru was exposed as a “˜paper tiger.

Communist China had not only decided to establish her de facto suzerainty over Tibet, (which had never relay existed)3, but it was the first step towards the South, the opening of the gateway to India and to other countries that China claimed as her own—Nepal, Bhutan, Sikkim, etc. Mao had termed Tibet as the palm of the hand with the five fingers being Ladakh, Sikkim, Nepal, Bhutan and NEFA.

These words were pronounced in 1957, but even in 1950 “for China there was no question to let the west wind prevail, it was the ‘sacred duty’ of the Chinese to look which side the wind blows.”5 A ‘sacred duty’ to liberate Tibet, to make the East wind prevail!

When I started getting acquainted with the history of modern Tibet in the early seventies, I came across a book, Communist China and Tibet by Gingsburg & Mathos. It was pointed out: “He who holds Tibet dominates the Himalayan piedmont; he who dominates the Himalayan piedmont, threatens the Indian subcontinent; and he who threatens the Indian subcontinent may well have all of South-East Asia within his reach, and all of Asia.”6

This sounded right and logical. Mao the strategist knew this well, as did the British who had always manoeuvred to keep Tibet as an ‘autonomous’ buffer zone between their Indian colony and the Chinese and Russian empires. The Government of independent India, upon inheriting the past treaties signed by the British, should have worn the British mantle with its advantages for Indian security and its sense of responsibility vis-à-vis Tibet. Unfortunately due to fear of appearing to be a neo-colonialist state, they failed to do this, without giving any thought to the consequences which would follow.

The importance of the strategic position of Tibet became even more obvious when China joined the restricted circle of the nuclear nations. Is there a better location than the Tibetan high plateau to position Intercontinental Ballistic Missiles (ICBMs) with nuclear warheads pointed towards India or elsewhere? Strategically and geographically, Tibet was the ideal place to locate testing sites and for storing nuclear missiles.7

The ‘coup’ of Tibetan ‘liberation’ was therefore a master-stroke. It was a well-planned affair. The Indian Intelligence Chief, B.N. Mullik, a Nehru loyalist once wrote: “However, in everything that Mao Zedong does there is a purpose and a method, and, whilst keeping the main aim always before him, he often makes compromises in the details to prepare conditions for the next step forward.”8 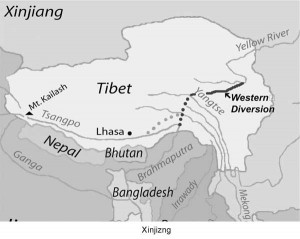 By colonizing the Roof of the World, Mao demonstrated to the world who the real leader of Asia was, while showing simultaneously that India was incapable of defending a smaller country; thus Nehru was exposed as a ‘paper tiger’.From then onwards, the Government of India followed a strange policy of appeasement. The more virulent the attack or insult, the harder it tried to appease the Chinese and become their ‘friends’. The Hindi-Chini Bhai-Bhai slogan was the most visible outcome of this policy.

Let us for a moment consider China’s contemporary problems.

The importance of the strategic position of Tibet became even more obvious when China joined the restricted circle of the nuclear nations.

Traditionally, the Chinese people’s respect for their Emperor increases manifoldly when the monarch undertakes projects that no human mind can even conceive. After all, the Emperor is the Son of Heaven, and only in Heaven can projects such as the Grand Canal, the Great Wall or the Three Gorges Dam can be envisioned.

The most acute problems facing China today are food and water. The future of the Middle Kingdom depends on the success or failure of the present Emperor(s) to tackle these problems. The two issues are closely interlinked and, if not solved, are bound to have grave social, political and strategic consequences for the Chinese nation and indirectly for its neighbours, particularly India.

Some twenty years back, this was spelt out in a remarkable book written by one of the foremost world experts in agriculture, the American Lester Brown. His book, Who Will Feed China9 published in the mid-eighties forced the Chinese leadership to rethink their agricultural strategies.

In the early 80’s, the conversion of agricultural land to other uses (factories, residential areas, airports, roads, flyovers, etc…) had provoked the loss of 52 percent of Japan’s grain harvested areas, 46 percent of Korea’s and 42 percent of Taiwan’s. China’s development being similar to these three countries, though it had started later, Brown concluded that China will ultimately be unable to feed its own people.