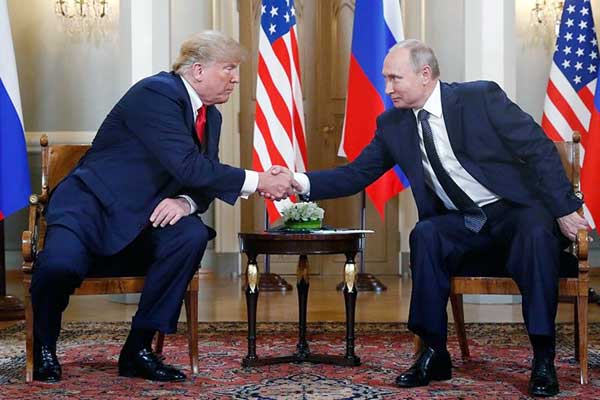 Indians should be pleased with the outcome of the Helsinki summit between Russia and the US as that resolves some of the major security dilemma faced by India. The problem was that while we wish to improve relations with the US, yet we would like to keep going our long term defence ties with Russia that have stood the test of time. It is however not yet clear if President Trump will be able to salvage the gains from the summit in view of the concentrated media campaign against Russia that has the backing of the ‘deep state’. All countries routinely try to influence electoral outcome in other countries. The US could well be called the ‘champion’ of this art and practice. The American media acting out its ‘morality play’ on Russian influence is nauseating and takes the consumers of its news product to be morons!

“Your neighbour is your natural enemy and the neighbour’s neighbour is your friend” is one of the oft quoted lines from Chanakya’s Arthashastra. The trajectory of Sino-Soviet relations followed this dictum well into 1990s. We in India are painfully aware of the Sino-Pak nexus against India. The US took full advantage of this in 1972 and used the China card against its main enemy, the erstwhile Soviet Union. Ever since the Shanghai declaration of 1972 (between President Nixon and Chou En Lie), a quasi- alliance existed between the US and China. Post- Cold War demise of Soviet Union and emergence of China as an economic super power, has transformed global balance. The fulcrum of world power shifted to Asia.

American Presidents from George Bush to Barrack Obama talked of shift of American power to Asia. Unfortunately, the Cold War suspicions lingered on and relations with Russia remained at best frozen in time and at worst inimical. It goes to the credit of President Donald Trump that he saw the absurdity of treating a potential ally like Russia as enemy. The message is basically to Europe that US as a Global Power views Russia as a potential ally in facing the challenge of Islamist terror and rise of China. In its sheer audacity, the initiative with Russia has the potential to transform world politics in the same way as the 1972 Nixon visit to China and ‘Shanghai declaration’ that changed the world power dynamics. The Helsinki summit held on 16 July 2018 marks a watershed moment, as important as the Shanghai declaration.

The US Russia relations have been dogged by controversies over civil war in Ukraine and annexation of Crimea. In the earlier years it was dispute between Russia and Georgia over a Russian enclave that triggered the tensions. In nut shell, the NATO powers have been encroaching upon Russia’s natural zone of influence since the end of Cold War. When a rejuvenated Russia under Putin began to resist these attempts, the West painted Russia as an aggressor and imposed economic sanctions. It is under these circumstances that Russia began to get closer to China. Such is the hangover of suspicion about Russia in mainstream America that the basic logic that the US and the West needs Russia as an ally if rise of China is to be contained was lost in translation.

With one bold stroke, Mr. Trump has demolished the European argument and asserted that when it comes to dealing with Russia, the US will look at the larger global picture and not a narrow Euro-centric prism. In the media coverage of events of 1990s a major point that was missed was that it was not merely dissolution of the Soviet Union that happened at that time but also the much older (nearly a hundred year old) Russian Empire established by the Czars also collapsed. The independence of various Central Asian Republics was part of that process.

The only exception to this rule was the Far Eastern province of Russian Siberia including the strategic port of Vladivostok. The Russians have an extensive border with China along the Amur river with the Russian side extremely sparsely populated while the Chinese side teeming with people. In March 1969 the dispute over Damansky Island erupted into armed clashes between the two countries. In the long term the Russians are mortally afraid of and aware of potential Chinese territorial claims over the Russian Far East. The current Russo-Chinese friendship is strictly a marriage of convenience, made possible because of European opposition to Russia. President Trump has astutely tapped the Russian unease and insecurity over this issue to woo Putin.

The US-Russia bonhomie augurs well for Indian interests. This will make Chinese more reasonable on the border issue and less prone to use the Pak proxy against India. Chinese would not like to open one more front, hemmed in as they are in South China Sea by Japan and the US and in the North by Russia. The Russia-America détente also resolves the Indian dilemma of arms imports from Russia as it is likely that the American sanctions on Russia, if not eased are atleast not likely to be made harsher.

In the bargain one of the likely losers would be Iran. Russia may well support America in curbing Iran’s nuclear ambitions. Russia may also co-operate with the US on Syrian issue. These would be the take-away that Mr. Trump can flaunt to drum up support for his Russian outreach.

Mr. Trump faces a determined opposition within the US to his Russian outreach. Much will depend on how the FBI probe currently underway pans out. The outcome of the Congressional elections due this year end will also determine whether Trump is able to carry out his foreign policy agenda. But if he continues to defy the media opposition and his party wins midterm elections, the Helsinki summit has the potential to transform the world power balance as decisively as the Shanghai declaration of 1972 did.