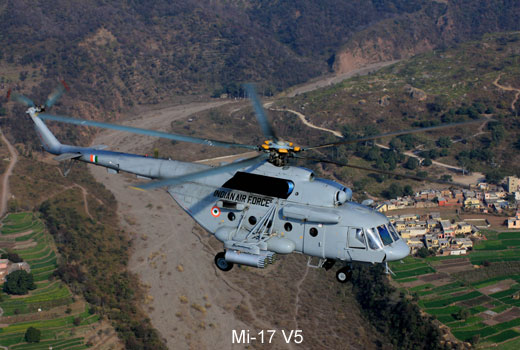 By definition, Special Operations are those that are executed independently or in conjunction with conventional military operations with the aim to achieve a political or military objective where a conventional force requirement does not exist or might affect the overall strategic outcome. Special Operations, more often than not, exploit the advantage of speed, surprise and violence of action against an unsuspecting target and are typically carried out with limited numbers of highly motivated personnel painstakingly trained to operate in hostile environment, improvise beyond copy-book drills, be self-reliant and use unconventional combat skills and equipment to achieve objectives. As far as counter terrorism operations are concerned, helicopters are in constant use to airlift para-military and police forces to locate or relocate in response to changing situations. A real Special Operation involving the use of helicopters would thus be one where a border or Line of Control is violated deliberately in pursuit of a strategic or operational objective.

The astounding success of Operation Geronimo was undoubtedly studied by everyone related to the military with great interest. Not only was the planning immaculate but the rehearsals were realistic and mission security supremely intact right up to the landing in Abbottabad. The mission was successful inasmuch as it achieved its objectives. Gratitude is owed to Matt Bissonnette (pen name Mark Owen) for laying bare the details of the Operation in his book ‘No Easy Day’ and one hopes his troubles with US law over the publication of his book are transient.

Performance of helicopters is significantly degraded at high altitudes…

The Operation revived the debate in the Indian military and strategic think tanks about India’s ‘capabilities’ of undertaking a similar mission. Notwithstanding the loss of one helicopter during the landing phase, considerable interest was generated in the use of helicopters for Special Operations. The then Chief of Army Staff, General VK Singh and the then Chief of the Air Staff, Air Chief Marshal PV Naik, publicly stated that if required, the Indian Army and the Indian Air Force (IAF) were capable of undertaking such a mission. Understandably, discussions in this context have hovered around the men, the machines and the ‘jointness’ of Special Operations. Of course, the lack of political will to mandate such an operation is a matter of a separate debate.

Special Operations in the Indian Context

India shares land borders exceeding 15,000 kms with seven countries – Bangladesh, Bhutan, China, Myanmar, Nepal, Pakistan and Afghanistan (at the moment the border lies within POK). Of the bordering states, Pakistan and China each having common borders with India of more than 3,000 km, are the ones with whom inimical relations are most likely to generate the need for Special Operations. Paradoxically, these are also the two against whom Special Operations are likely to produce the most damaging fallout.

There is also the problem of terrain. Performance of helicopters is significantly degraded at high altitudes discounting some types and severely restricting the use of others.

A large part of the land borders with the not-so-friendly neighbours sits astride high altitude and poses a problem for terrain-hugging, radar-dodging, night-favouring Operation Geronimo type of Special Operations. The consolation is that the terrain also renders defence against a determined operation difficult. Moreover, situations can arise within the extensive Exclusive Economic Zone of more than two million square kilometres and the almost 8,000 km coastal boundary that India has. There is also the massive geographical extent of India that is afflicted by insurgency. All these pose interrogative marks over ‘Special Operations’ using helicopters.

By definition, ‘Special Operations’ are those that are executed independently or in conjunction with conventional military operations with the aim to achieve a political or military objective where a conventional force requirement does not exist or might affect the overall strategic outcome. Special Operations, more often than not, exploit the advantage of speed, surprise and violence of action against an unsuspecting target and are typically carried out with limited numbers of highly motivated personnel painstakingly trained to operate in hostile environment, improvise beyond copy-book drills, be self-reliant and use unconventional combat skills and equipment to achieve objectives.

The notable Indian Special Forces are the Para Commandos, Ghatak Force, Marine Commandos, Garud Commando Force, Special Frontier Force, National Security Guards, Special Protection Group and the COBRA force. The first three listed above are most likely to be used in a trans-border heli-borne Special Operations. As far as counter terrorism operations are concerned, helicopters are in constant use to airlift para-military and police forces to locate or relocate in response to changing situations. A real Special Operation involving the use of helicopters would thus be one where a border or Line of Control is violated deliberately in pursuit of a strategic or operational objective.

As far as the fitness and motivation parameters are concerned, Indian Special Forces personnel have proved themselves during joint training events and indeed, in live operations. Operation Cactus was a classic special operation with 400-odd Para Commandos being airlifted 3,500 km to land on an unlit runway with no confirmation of who controlled the airfield. The Operation undoubtedly saved a nation. However, decisive Special Operations such as Operation Cactus (especially those involving helicopters) are unlikely in the Indian context in the future. The rotary wing craft in the IAF and Indian Army are capable of carrying Special Forces from Indian territory to unprepared landing areas across the border but are not equipped with stealth features for enhanced protection. With night vision equipment, it is possible to induct troops under cover of darkness.

Incidentally, No 6 Special Operations Squadron of US Air Force Special Operations Forces uses among others, Mi-8 and Mi17 helicopters. As the IAF has the much better performing Mi171V and its latest variant, the Mi17 V5, there is reason to feel assured about the helicopter availability for Special Operations. Extraction, of course, from the jaws of an alerted enemy, would undoubtedly be a daunting task. So, if our personnel are ‘macho’ enough to pull off impressive performances and our helicopters are reasonably suitable for Special Operations, what holds back the capability in this regard?

The first factor is the issue of political will to violate borders. Historically, as far as Indian political leadership is concerned, clear direction and the last bit of steel beyond the rhetoric, has been missing. In Kargil, even after Pakistani troops were known to have crossed over the Line of Control (LoC), Indian troops continued to be restrained. The IAF was also very reluctant to take the fight across the LoC. These strategic decisions in the initial parts of the conflict led to ever increasing levels of tactical difficulty in regaining lost territory. In the face of such evidence, it would be unreasonable to even hope that the Indian political leadership would ever come around to a Special Operation using helicopters to carry our Special Forces across an International Border (IB) or an LoC.

As far as Indian political leadership is concerned, clear direction and the last bit of steel beyond rhetoric, has been missing…

Special Operations would have needed political clearance. While a successful operation would have meant instant glorification for the leadership, failures such as the Iranian hostage botch-up by US Special Forces, would have placed the government and the party at risk.

How did the US overcome the problem of infringing international borders for Operation Geronimo? In 2001, the United States Congress had passed Special Resolution 23 (Authorisation for Use of Military Force) in response to 9/11. According to that resolution, “The President is authorised to use all necessary force against nations, organisations or persons he determines, planned, authorised, committed or aided the terrorist attacks that occurred on September 11, 2001, or has harboured such organisations or persons in order to prevent any future acts of international terrorism by such nations, organisations or persons.” In effect, it gave the US President the authority to order the elimination of a terrorist organisation and terrorist leaders.

As far as crossing Pakistani borders is concerned, the mission was ostensibly carried out not by the US military but by the CIA with US troops attached to the Agency. Since CIA operatives participate in anti-terrorist operations in Pakistan in collaboration with Pakistani forces, the operation was portrayed as an extension of CIA operations. A fuming Pakistan had no choice but to lump the intrusion and the loss of face. After Operation Geronimo, a hostile response by Pakistan was out of the question. However, in response to General V.K Singh and Air Chief Marshal P.V Naik’s statements about India’s ability to carry out Special Operations against terrorists, Pakistan Army Chief General Kayani called a meeting of Corps Commanders and sabre-rattled, “Any misadventure of this kind will be responded to very strongly. There should be no doubt about it.”

In that context, fear of reprisal or failure is one component of the thought process. The other is the inhibition as a nation to do so. There is also the question of government’s lack of comprehension of the strategic importance of Special Operations. Indeed, there is no single office in the establishment that has the responsibility to plan and direct Special Operations. Thus, when decisions are required for a commitment to Special Operations, personalities in the political machinery at that time become the deciding factors. The success of Special Operations depends on painstaking coordination of intelligence from various sources. Given the diverse nature of the possible sources of forces involved i.e. the defence, the paramilitary, the police and the intelligence, the only formula for success is a government level platform to coordinate and direct such an operation. To one’s mind comes up the famous picture of President Obama with a diverse set of functionaries huddled together possibly in the White House, anxiously following the progress of Operation Geronimo. As it turned out, the anxiety was wasted as the months of agonising lengths of coordination ensured the success of the Operation. Hark at the botched up heli-borne operation at Jaffna University in October 1987 by the Indian forces. The operation was a failure due to incorrect intelligence on deployment around the University campus.