Helicopter Fleet for the IAF

The IAF’s medium lift capability is based largely on the Russian Mi-8, Mi-17,
Mi-17 1V and the latest, Mi-17 V-5. India is one of the world’s largest Mi-8 and Mi-17 operators with around 200 of these variants in service. The Mi-8/17 family is the most widely produced helicopter design in history, with over 11,000 sold to more than 110 countries. In January this year, the Mi 17 V5 was inducted into the IAF with the Air Chief inaugurating a medium-lift helicopter complex for the newly formed Mi-17 V5 squadron at Phalodi airbase near the Indo-Pak border.

The Mi-17 V5 falls under the armed helicopter category, with substantial firepower, sophisticated avionics and onboard navigation systems and the latest and more powerful engines than the earlier variants. It has onboard weather radar, state-of-the-art autopilot, is equipped with the latest generation night vision devices and is thus capable of undertaking all-weather, day-night operations in any kind of terrain. The Mi-17 V5 has a maximum AUW of 12 tonnes and can carry 36 passengers. Alternatively, it can carry four tonnes of cargo internally or on an external sling. It can carry out an Out of Ground Effect Hover at elevations up to 6,000 metres and represents a great enhancement in the medium-lift helicopter capability of the IAF.

In 2008, India ordered 80 Mi-17V-5 helicopters worth $1.375 billion to be delivered by 2014 to replace the ageing Mi-8s. The first Mi-17V-5 was received in February 2012. During the 13th India-Russia Annual Summit in New Delhi on December 24, 2012, the Indian Prime Minister and Russian President signed a contract for the supply by Russia of 72 additional Mi-17 V5 helicopters. These would be delivered after the induction of the 80 Mi-17 V5 is complete, IAF’s capability in the medium category is set to be notably enhanced.

The Mi-26 was procured to meet the heavy lift helicopter requirements of the IAF. A requirement of six helicopters was projected. The first two helicopters were procured in May 1986 and another two in February 1989. However, due to low utilisation, the plan to procure two more helicopters was dropped. Moreover, serviceability was poor during the 1990s. At one time three of the four were grounded during 1995-1996. Serviceability gradually fell in the mid 1990s from a high of about 60 per cent down to 40. The helicopters also remained underutilised. Against a projected utilisation rate of 50 hours per month per helicopter, the average utilisation remained around 11 to 22 hours per month. In December 2010, this number reduced to three after one met with an accident at Jammu.

In October last year, after a tedious and time consuming selection process for 15 helicopters, the twin-rotor CH-47 Chinook from Boeing emerged as the cheaper option against the Mi-26 which was a strong contender for the deal. Both had earlier passed the extensive field trials, but the Chinook price tag turned out to be lower in terms of its acquisition and life-cycle costs. Perhaps the poor serviceability record of the Mi-26 played against it too.

The Chinook has a unique design incorporating powerful contra-rotating tandem rotors and is being operated by around 20 countries for heavy-lift assault, troop movement, logistics support, aerial battlefield recovery and special operations. Capable of being refuelled in mid-air, a Chinook can carry 55 combat-ready troops or 12.7 tonnes of cargo. The Mi-26 was larger with a maximum take-off weight of 56,000kg and a carriage capacity almost double that of a Chinook whose maximum gross weight is 22,668kg. However, the Chinook can be transported in the hold of the C-17 Globemaster III. India has ordered ten such aircraft and the advantage of being able to transport the Chinook over large distances is obvious.

Another area where the US beat the Russians in meeting an IAF requirement was that for attack helicopters. During the selection process, Boeing’s AH-64D Apache Longbow met all Air Staff Requirements while the Russian Mil Mi-28 failed some of the requirements during the field trials conducted by the IAF. Twenty two Apaches have been ordered for around $1.4 billion. 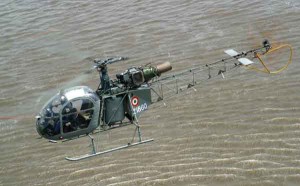 Meanwhile, the long-standing debate about the ownership of Indian attack helicopters came to an end during March this year with the Defence Minister saying, “Keeping in view operational requirements, the government has decided that the ownership of future inductions of attack helicopters will vest with the army.” Meanwhile, HAL’s Rudra has received its Initial Operational Clearance (IOC) from Centre for Military Airworthiness and Certification (CEMILAC), the regulatory authority for military aircraft in India. Understandably, HAL has declared the event as an entry into an elite group in the world which can design, develop, manufacture and certify a helicopter as a weapons system to international standards.

Rudra is projected as an armed helicopter and is the Weapon System Integrated Mk IV variant of the Dhruv ALH. It is the first armed helicopter being produced indigenously in India and is intended for a wide range of missions, including reconnaissance, anti-tank warfare and close air support. Development of the Rudra was authorised in December 1998 and a prototype made its first flight in August 2007. It completed 20mm turreted gun firing trials in September 2011 and Mistral air-to-air missiles and 70mm rocket tests in November 2011. Mistral is an infra-red homing missile, which is capable of striking targets within a range of 6.5km. The maximum take-off weight of the helicopter is 5,500kg and it can carry a payload of 2,600kg.

The Rudra can be fitted with up to eight Helicopter Launched Nag (Helina) anti-tank guided missiles, four MBDA Mistral short-range air-to-air missiles, or four rocket pods for 68mm/70mm rockets. HAL was committed to deliver 76 Rudra ALH Mk-IV helicopters for the Indian Army and the IAF and has handed over the first Rudra helicopter to the Indian Army in February 2013. The IAF was looking forward to the Rudra for high altitude operations, particularly as no country makes attack helicopters for high altitude operations as relevant to the Indian context. However, as the Ministry of Defence (MoD) has announced that ‘future’ combat helicopter assets would go to the Indian army, the future of Rudra induction into the IAF is uncertain. Whether the Rudra is an armed or an attack helicopter is the subject of another debate whose outcome would decide the issue of its induction into the IAF.

The IAF’s helicopter fleet is indeed being upgraded…

Rotary wing technologies, although not apace with fixed wing developments, are making significant advances. With conventional rotary wing designs having plateaued out on the speed front, tilt rotors and mixed/hybrid designs are coming into limelight. The Bell-Boeing V-22 Osprey, favoured by the US Marine Corps, had a shaky beginning but has performed reasonably well in Iraq and Afghanistan. The US Marine Corps uses the V-22 for combat assault, amphibious assault and sustained land operations, while the US Air Force CV-22 is intended for long-range special operations and contingency operations. The IAF is interested in all of these missions as also for possible Combat Search and Rescue, special operations role, as also for humanitarian relief. The IAF’s specific interest lies in the V-22’s ability to fly to India’s island territories in the Bay of Bengal and the Arabian Sea.

The IAF’s helicopter fleet is indeed being upgraded; whether the projections will finally measure up qualitatively and quantitatively to be commensurate with the status of the ‘fourth largest Air Force’ is debatable. Needless to say, the IAF would like to have the world’s most modern military helicopters in its inventory.

It may be pertinent to flag some issues here. First of all, the ownership of attack helicopters has been a rancid debate for some time now. One would like to believe that, as the Defence Minister reportedly put it, there is no dispute between the Army and the Air Force. However, this author feels that while the ownership of attack helicopters in the future may have been assigned to the Army by the Minister, the debate will go on for some time. Also, if the Minister actually intended that the 22 Apaches be owned by the IAF and the Rudra go to the Army, the wisdom of that decision is questionable. The ownership of the 22 Apaches by the IAF and a large number of Rudras by the Army would generate problems of their own. The 22 Apaches would be of limited use by themselves and are doomed to be dribbled away in penny packets.

One hopes that the Dhruv technology will prove to be the way to the future and lift HAL out of the gloomy reputation it enjoys within the IAF.

The second issue is that of technology. Although the US lost out in the MMRCA race, the consideration of life-cycle costs has tilted the balance in favour of US products when it comes to the C-17 Globemaster III, the C-130J Super Hercules and the AH-64D Apache Longbow. Similarly, French technology has scored over Russian expertise in the regime of aerial tankers. On the other hand, the progressions in the Mi-17 family and the advantage of maintaining continuity of fleet type, as also the fact that there are no comparable Western helicopters, have kept the IAF’s interest in that lineage intact. Thus, we have an interesting mix of Russian and Western technology in IAF’s helicopter stream. Those in the IAF who are privy to life-cycle costs and reliability factors privately acknowledge that Western technologies are more appealing in the long run.

HAL’s Dhruv has had a wobbly start. Its civil air worthiness certification has had to be taken away twice by the Director General Civil Aviation due to technical issues. However, the helicopter is a new design and up on the learning curve. It may take some time to establish itself as a sturdy, stable and a reliable platform. One hopes that the Dhruv technology will prove to be the way to the future and lift HAL out of the gloomy reputation it enjoys within the IAF.

The final point is that Army Aviation is growing rapidly. The Army plans to expand at the rate of two ALH Squadrons every year. The helicopter’s tactical capability is perhaps best exploited when placed under the land force commander so that it becomes an elevated battlefield platform giving the commander an additional advantage in surveillance, manoeuvre and application of force. Perhaps the time has come when the bifurcation or trifurcation, if Naval Aviation is also allowed for, of roles and tasks for helicopter assets needs to be revisited. In the absence of a Chief of Defence Staff (CDS), that exercise may become one long squabble. On second thoughts, even a CDS may not be able to find a quick, comprehensive and quality trifurcation solution which finds acceptability with all the three services. Some change in single service culture is necessary before national interest becomes the definitive criteria and overrides parochial and long-held single service standpoints.

4 thoughts on “Helicopter Fleet for the IAF”