Helicopter as a Combat Platform

The Helicopter in Battle

The two widely disparate views cited above on the utility of the helicopter have influenced the use of this versatile platform in military operations. Any discussion on the applications of the helicopter in combat brings back memories of the Bell 47 seen at the beginning of every episode of the popular TV serial M.A.S.H ferrying wounded soldiers to a field hospital in the Korean War, of swarms of Huey UH-1H helicopters landing combat troops in the open fields in Vietnam, of Russian Mi-24 attack helicopters in Afghanistan and downing of two American helicopters in Somalia in the movie Black Hawk Down.

The first reported use of helicopters in combat was during World War II where they were used in light utility roles including search for submarines. The technology was not refined adequately to bring Allied or German helicopters into combat roles, however American helicopters came under fire for the first time in WW II when they were used to evacuate battle casualties from the front line in Luzon, Philippines to hospitals in the rear.

The Vietnam War was the litmus test for helicopters in combat. The operational roles of the helicopter were exploited to the fullest and new tactics evolved as the war progressed.

In the late forties after World War II, the US Marines claimed having pioneered the concepts of vertical envelopment, assault troop mobility and logistical re-supply with the helicopter. A tactical nuclear engagement in Europe as envisaged in the post WWII era, demanded rapid dispersion of attacking forces to make them less vulnerable. Ship- borne and land-based helicopters offered a viable option. The Korean War was the test bed for these concepts. The Bell S-47 and Sikorsky S-51 were used extensively for utility, rescue and medical evacuation. The Sikorsky S-51 was capable of carrying two pilots and a passenger and the Bell S -47 carried one pilot and two passengers in a bubble cockpit. The Bell helicopter was modified to carry two stretchers on the skids outside the cockpit.

In the bitter cold of the Korean winter, it could not have been comfortable but was infinitely more welcome than a bumpy road journey to a field hospital. The first US Marine helicopter re-supply mission in the Korean War flew on September 13, 1951. Eight days later, 224 US Marines and 17000 pounds of cargo were landed on an isolated hilltop. The doctrine and tactics developed by the US Marines after WW II were proven in the Korean War and the helicopter emerged a clear winner. A Marine operational report stated “ The initial efforts have stated strikingly the great contribution to tactical and logistical flexibility that the assault helicopter offers. Helicopter functions will be progressively enlarged as time passes and the aircraft type must be recognised as a requisite component of a balanced military force.”

The Vietnam War was the litmus test for helicopters in combat. The operational roles of the helicopter were exploited to the fullest and new tactics evolved as the war progressed. Unlike in Korea where helicopters operated from a clearly defined front-line, in Vietnam, the Bell Huey UH-1H with Red Cross markings flew into combat zones to pick up casualties. Unarmed helicopters were also used to deliver supplies and ammunition to troops and these missions were lightheartedly termed as “ preventive medicine”. 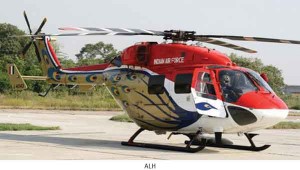 As the war progressed, the North Vietnamese refined their tactics against helicopters and inflicted heavy losses on US helicopters which had to be provided with armour plating for the crew and engines for protection against small arms fire. US Helicopters were also equipped with missile launch warning systems, flare dispensers and engine exhaust heat suppression systems to degrade enemy air defence artillery and surface to air missiles. Though the helicopter was better protected, they continued to be vulnerable to ground fire. The last poignant image of the Vietnam War was of a US Marine helicopter hovering above the US Embassy in Saigon to evacuate the last few Americans.

The Vietnam War saw the role of the helicopter enlarged to include such diverse missions as heavy lift, mine countermeasures, combat search and rescue, special operations, psychological warfare, assault operations, tactical recovery of aircraft etc. Of the over 40,000 helicopter pilots and crew that served in the Vietnam War, more than 4900 perished. Also, over 4000 of the 12000 helicopters deployed in Vietnam were lost. The sheer magnitude of helicopter operations in Vietnam is unlikely to be surpassed ever. Helicopters changed the way ground wars had been fought.

…over 4000 of the 12000 helicopters deployed in Vietnam were lost. The sheer magnitude of helicopter operations in Vietnam is unlikely to be surpassed ever.

Instead of armies engaging one another on static fronts or advancing slowly and holding ground, helicopters gave commanders the ability to move troops quickly into hostile territory, to deploy and withdraw as required. The Huey UH-1H became symbolic of the Vietnam War and was as ubiquitous as the Willy’s Jeep in World War II.

As the Vietnam War was winding down, the focus shifted to Europe where the standing armies of NATO and Warsaw Pact countries were pitted against each other. The threat of a Soviet led ground offensive loomed large and air mobility offered some solutions to NATO. The overwhelming Warsaw Pact ground forces and their manoeuvre capability was planned to be blunted by the superior technology of NATO forces. By the eighties, heavily armed helicopters with missiles were being touted as tank busters. The Warsaw Pact air defence environment in Europe appeared to be invincible and was a serious threat to NATO helicopters.

NATO strategy emphasised night operations using leading edge technologies for navigation, target acquisition, night vision devices for aircrew and ultra low level flying using “ Nape of the Earth” flying techniques but none of these were tested in combat. These technologies were being developed both by NATO forces and the Soviet Union and fielded by their respective armies; but the overall strategy in Europe was tempered with caution as both sides knew that any misadventure could quickly escalate into a tactical nuclear war or worse.

The Soviet invasion of Afghanistan provided the next opportunity to evaluate the effectiveness of helicopters in combat. On December 25, 1979, Soviet airborne troops landed at Kabul to form an air-bridge and two days later, Soviet ground forces entered Afghanistan. President Hafizullah Amin was assassinated and replaced by Babrak Karmal. During the decade long Soviet expedition in Afghanistan, sometimes referred to as the “Russian Vietnam”, helicopters were the mainstay of the Soviet forces and were used in every conceivable role. The Mi-17 gunship and the Mi-24/35 attack helicopter established the efficacy of the combat helicopter as an airborne platform to provide extended support to ground forces. Attack helicopters were employed to protect assault troops, escort convoys, undertake hunter-killer missions and night operations lighting up areas of action with flares.

…lessons from the wars of the past and ongoing conflicts around the world indicate that there could be serious constraints on the use of gunships and attack helicopters in the high altitude regions of the Himalayas.

In the early days of the war, the Afghan rebels were armed with only heavy machine guns, rocket propelled grenades and some rudimentary and ineffective air defence artillery. Against an ill-equipped opposition, Russian pilots recorded a high degree of success. As the CIA supplied Stinger missiles arrived in Afghanistan, attrition rate of Russian helicopters climbed significantly. As the Russian helicopters were compelled to operate outside the kill envelop of the Stinger missile, they were relatively less effective. The lesson that even combat helicopters were highly vulnerable in a lethal air defence environment was reiterated.

The Indian experience of helicopters in combat roles is perhaps based on experiences during the 1962 war with China, the 1965 and 1971 wars with Pakistan and in 1987-88 while operating as part of the Indian Peace Keeping Force (IPKF) in Sri Lanka. The final assault on Dhaka in December 1971 could not have been carried out if it was not for the airlift of troops by Indian Air Force (IAF) helicopters across the innumerable water obstacles in East Pakistan, later Bangladesh.

The IPKF was supported by helicopter gunships and attack helicopters. They were targeted by the LTTE and occasionally sustained damage; but there were no losses due to ground fire. The LTTE air defence environment in Sri Lanka was not lethal and permitted the unfettered use of helicopters; but such a situation is unlikely to exist in future. The IAF has also gained valuable experience while operating helicopters as part of UN Peace Keeping Forces in different parts of the world.
1 2
Single Page Format
Rate this Article