Heating up of Cold War: Paradigm shift in Players and Dimensions 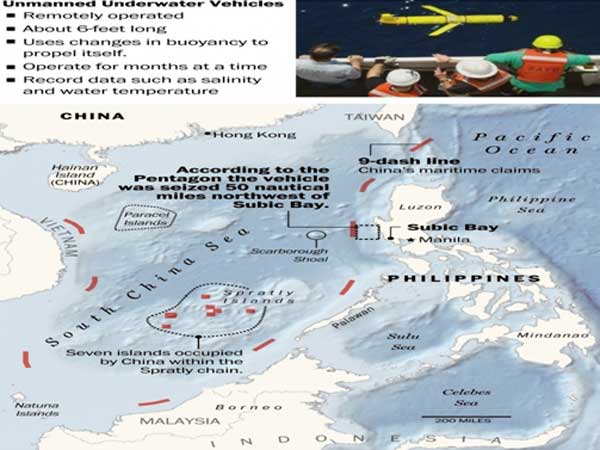 The ‘Cold war’ of 20th century has taken a Paradigm shift in 21st Century, is heating up with new players and expanding to new dimensions.  The latest and largest player to enter Cold War arena is China, who in last six months has made best use of the US relative inaction in Asia-Pacific Region, due to their domestic occupation in pre and post elections scenario, correctly appreciating that no big bang decision is likely from them. China has used this period to increase its strategic space.

The deployment of China’s weaponry and infrastructure in various artificial structures in SCS continues to increase unchallenged in last few months.

The Pentagons announcement (New York Times, 17 December 2016) of China agreeing to return the underwater vessels seized by them, may have reduced the immediate tension in South China Sea (SCS), temporarily, in the run up for inauguration of President elect Donald Trump, but the heating up of cold war in SCS is quite evident.

The deployment of China’s weaponry and infrastructure in various artificial structures in SCS continues to increase unchallenged in last few months. The diplomatic swinging of Philippines stance/leadership on SCS, or influencing consensus of ASEAN (exploiting their varying individual interest) on their outlook towards SCS, or bandwagoning smaller neighbours by “infrastructure diplomacy” and “Purse Diplomacy” of China are part of cold war. The biggest gain they have made is in Pakistan, by exploiting receding US interest there, to get warm water access through CPEC and getting space for commercial/ potential military base at Gwadar. The US now seems to be waking up, not to give up their interest in ‘Heart of Asia’ by announcing $900 million to Pakistan with certain preconditions, mainly to fight Haqqani network.

Although the cold war between US and China is not new despite heavy economic dependency, but it was well announced when President Xi Jinping stated to be treated as equal in Chinese media, before going to US last year. The sabre rattling in South China Sea since last one year or more, US lifting arms embargo on Vietnam an unprecedented visit of US President there, and launching of TPP was indicating how keenly that strategic space was being contested. The economic war to include devaluation of Yuan and launching of AIIB by China, and are some visible indicators of cold war. Now the US seems to have woken up for the loosing strategic space/influence in the region.

…devaluation of Yuan and launching of AIIB by China, and are some visible indicators of cold war.

The unprecedented meeting of US President and Dalai Lama, visit of US envoy to Arunachal Pradesh on in end October 2016, US support to India on certain issues like NSG, a famous phone call to Taiwan President by President elect Donald Trump on, followed by his questioning the US binding to “One China Policy” in an interview to Fox News on December11,2016, has irked China out of proportion, and posed a serious challenge to them, and given a readable signal that US is in no mood to be pushed out of Asia-Pacific Region. China has also reacted sharply with their Foreign Minister Wang Yi asserting that no country is exempted from ‘One China Principle’, along with military posturing with Chinese aircraft carrier carrying out its first live fire drill in SCS (SCMP, December 16, 2016).

The age old cold war of capitalists versus communists steered by US and Russia has shifted to Ukraine and Crimea from heart of Asia, economic sanctions of West on Russia, deadlock in dealing with IS in Syria (for and against Sadat), the latest news of alleged Russian role in election process of US (Cyber Warfare), and the media speculations about how President elect Donald Trump is going to deal with Russia. These moves to some extent have increased mutual interdependency of Russia and China, for mutual convenience. The unprecedented trend is Russian growing interest in Pakistan, be it through Arms sale, military exercises or recent interest in Afghan Taliban, has caused concerns in India (Times of India, 16 December 2016), and may be relevant for US in terms of prolonging their stay there, to prevent loss of strategic space.

The cold war syndrome has also expanded within the region, including China and India. While China has done well to encircle India by trying to lure common neighbours like Nepal, Bangladesh, Sri Lanka, Maldives with ‘Infrastructure and Purse Diplomacy’, blocking India’s entry into NSG, appeasing militants in Pakistan by blocking JeM Chief being declared a global terrorist despite the organisation being on declared terrorist organisation list, and helping Pakistan in every possible way with resources, which can be used for inimical activities against India. India has also responded to protect its interests, by voicing its concerns in South China Sea and CPEC, or helping Mongolia financially, or allowing free movement of Dalai Lama or cooperation with Japan on various issues including nuclear cooperation and military exercises.

Unfortunately despite humanity suffering heavy losses, the theory of ‘Good and bad Terrorists’ is still being followed by some powers fighting cold war…

The dimensions of cold war have also grown from erstwhile oil politics, Arms Race including nuclear dimension to Space, Cyber, Information Warfare and Economic Warfare including sale of arms/technology.

The recent additions to cold war are strategic and economic alliances, strategic posturing, joint military exercises like Malabar Exercises, but the most discouraging part is the entry of cold war into a dirty domain like double gaming with respect to terrorism, despite everyone claiming to be together in global fight against terror. Unfortunately despite humanity suffering heavy losses, the theory of ‘Good and bad Terrorists’ is still being followed by some powers fighting cold war, because individual national interest are overshadowing global interests. The strategic power of water is the next dimension likely to get added in future. The unwritten rules of cold war have also changed, to an extent that the arch competitors continue to engage commercially, irrespective of the strategic situation like US-China, China-Taiwan, India-China, Japan-China etc, along with the competition between them.

The players of cold war are also not distinct for example, Is it US versus China/ Russia or a combination of various countries or it’s multiple sets of cold wars? Economic cooperation and strategic competition is the new paradigm for cold war and economic interests overshadow all other considerations in decision making. Although some strategists may call it examples of multilateralism, but with terrorism, covert and cyber warfare being unleashed, “Cold War” with different paradigm is a reality.