‘Hawk AJT Induction has been smooth and the pilots are happy’ 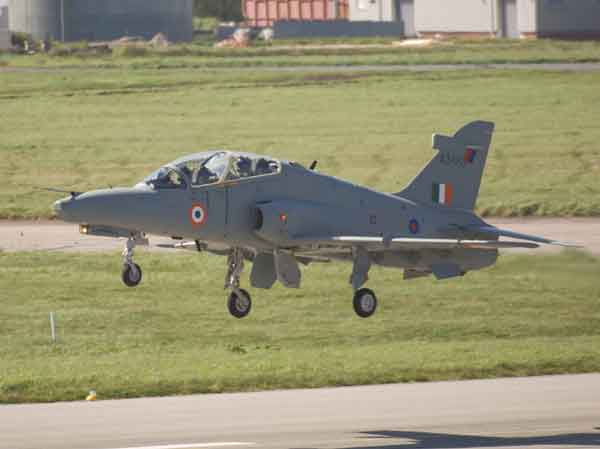 The BAE Systems team at Aero India 2013 discussed the Hawk Advanced Jet Trainer (AJT) induction into the IAF and the new RAF training concept of the Virtual Training System (VTS), during the course of a media interaction at the show venue on 08 February 2013. A brief mention was also made about the possible induction of the ultra light M777 155 mm/39 Calibre towed howitzer system of BAE Land Systems (US), into the Indian Army.

The US Air Force is looking at the Hawk as a lead in trainer for the latest F 35 fifth generation fighter.

Hawk AJT Induction. Mr. Michael Christie, Senior Vice President India, pointed out that the induction has been smooth and the pilots are happy with the enhanced quality of training that the aircraft offers. The maintenance system at unit level is well set. Local assembly by HAL is progressing satisfactorily. 998 Hawk aircraft have been sold worldwide. This has created a vast pool of experience in manufacture, induction, maintenance support and operations. The US Air Force is looking at the Hawk as a lead in trainer for the latest F 35 fifth generation fighter. The US Navy operates a variant. Customers include the air forces of South Africa, Australia & Bahrain among others. With embedded Hands On Throttle & Stick (HOTAS) capabilities, cockpit systems management has simplified & reduced pilot workloads.

The Virtual Training System (VTS) Concept. Wing Commander Kevin Marsh, Commanding Officer of No. 4 (Reserve) Squadron of the RAF, a unit with a history of 101 years, explained the salient points of this concept. The squadron operates the Hawk T2 in the fast jet operational training role. The system utilizes BAE’s extensive experience in the areas of airborne simulation & incorporates synthetic radar, electronic warfare, countermeasures and weapons into the aircraft’s mission system architecture. This basically enables teaching of additional skills to pilots on operation of Sensors, Electronic Warfare (EW) Systems & Weaponry which are not physically present on this aircraft but will be on the front line combat aircraft on to which the pilot is going to be inducted after the Hawk training stage. This reduces the high costs of using the latter aircraft for training pilots in operating these systems, reduces wear & tear on front line aircraft, eases the difficulty in transitioning onto these aircraft and teaches valuable skills in tactical employment of sensors & weapons, skills which are aircraft type independent & applicable across the board. The training also uses ground based procedure trainers and simulators extensively while keeping flying hours at the same levels so that the end result is achievement of higher skill levels at reduced costs. Software modifications can tailor the system to match requirements of creating simulated mission profiles tailored for specific combat aircraft types in the inventory. The system is being offered to the IAF.

Software modifications can tailor the system to match requirements of creating simulated mission profiles tailored for specific combat aircraft types in the inventory. The system is being offered to the IAF.

Cost Cutting. Some of the flying training & maintenance functions have been outsourced to civilian agencies (ex RAF background personnel) to further reduce infrastructure revenue costs so that the force has more resources to spend on capital as opposed to revenue items. Budgetary constraints may make this a viable cost effective solution.

M777 155 mm/39 Calibre Ultra Light Howitzer. This towed howitzer system is helicopter transportable as under slung loads by helicopters of the CH 47 Chinook class and tries to meet the Indian Army requirement of portable & rapidly deployable artillery support in the mountains. It is light in weight at 4218 Kg. The shells have an unassisted range of about 24 Km & a boosted range of up to 30+ Km depending on ammunition types used & is Precision Guided Munitions (PGM) compatible. The Army is critically short of this capability. Artillery has been called “Ultima Ratio Regis” (the king’s final argument). After a lot of hiccups, acquisition from BAE Land Systems (US) through the US Military via the Foreign Military Sales (FMS) route without competitive bidding seems to have been decided upon.