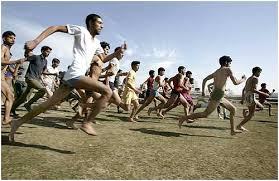 Jammu and Kashmir has suffered tremendously in the shadow of the gun for the last almost three decades. Violence hit the youth of the region most of all. Their education and development suffered since families were engrossed in the day to day challenge of survival. As a result, they lost out on employment opportunities and entrepreneurship.

It is to the credit of the Indian Army that, in the most testing times, it understood the need to keep the youth, especially of the Kashmir valley, engaged with the aspiration of a better future. Since the last three decades, the army, under its flagship welfare programme – Operation Sadbhavna- has been making efforts to bring the state into the mainstream of the country’s growth trajectory. Army Goodwill Schools were instrumental in meeting the pressing educational requirements at a time when government education infrastructure collapsed under the terrorist threat. Unfortunately, the state governments at that time were not forthcoming and left it to the Army to handle these projects by themselves.

In an effort to involve the youth in gainful and constructive activity, the Army established a number of Youth Employment Guidance Nodes (YEGN) to provide information regarding employment opportunities. Vocational Training Centres (VTC) were also set up to train the local population, including women, in a trade of their choice. The ‘Kashmir Super 30’ project launched in 2014 by the Army and modelled after the well-known ‘Super 30’ programme of Bihar has elicited excellent results year after year. The  Army has been holding regular recruitment rallies to fill vacancies in various segments. These are being attended by thousands of candidates which ensures that no vacancy is left unfilled.

Thankfully, the efforts made by the Indian Army are now being replicated by the state and central Government. Post the bifurcation of the state and abrogation of Article 370 and Article 35A, new vistas of employment generation and enhanced economic activity have been opened up.

The biggest initiative was announced on 07 January, 2020 by Lieutenant Governor Manoj Sinha. It relates to a Rs 28,400 crore Industrial Development Plan for The Union Territory (UT).  The plan will commence on the day of notification and go on till 2037. It is designed to provide employment to about 4.5 Lakh people  and will build on existing industries as well as new enterprises. Areas like horticulture, fisheries, animal husbandry, dairy farming that form the basic economy of the state will benefit.

The success of the policy depends on skill development and empowerment of the youth. The UT government is taking positive steps in this direction by envisioning a Youth Empowerment Programme (YEP). While observing that the youth of the UT are inherently talented the Lieutenant Governor said, “The intended programme will prove to be an institutional mechanism for providing the necessary handholding and support to the youth to facilitate and nurture their capabilities, build an atmosphere of trust and positivity, identify gaps and resolve the same through various technological and knowledge-based interventions.” In a region where almost 65 per cent of the population is under the age of 35 years, it is only proper that the government runs such initiatives.

The UT Government also has in place a “comprehensive” employment plan to fill up 25,000 vacant posts for which the process is already under way. It will give much needed relief and build on the stated objective of the central government to give employment to 50,000 youth of the UT in a time bound manner.

Another interesting initiative taken by the central government in Mid-2020 is Skill, Empowerment and Employment in Jammu & Kashmir (SEE J&K). The programme will cover 1 lakh youth in the next 5 years and will be implemented through competent training providers from the private sector and non-profit organisations. The chosen candidates will range from school dropouts to graduates and post graduates with each empowered in accordance to his education and capability. Placements would be across the nation.

The Army has, while keeping COVID restrictions in mind and taking all precautions, resumed its WHAM responsibility of encouraging, motivating, training and educating youth towards pursuing wholesome careers under the new schemes of the government. In recent days, lectures have been conducted on “Youth Empowerment Schemes in J&K” at various places in Rajouri.  In Doda, the Army has conducted coaching classes for students aspiring to take the Sainik School entrance examination. In Poonch, special lectures have been organised for the Gujjar-Bakarwal community to impress upon them the importance of education and caring of their animals and habitat.

In Kashmir, the Chilla-e-Kalan (extreme cold) period starting on December, 20, has been ushered with festivals and band displays. A two day festival named ‘Jashn-e-Baramulla’ was held in end-December which included performances by participants of Kashmir’s Got Talent and various local artists. Shopian witnessed a grand musical festival at Batpura Sports Stadium that attracted a massive participation by more than 5000 people. A similar musical and cultural festival organised by local army units at Government College Handwara witnessed massive participation by local people.

The central theme of the functions held in Kashmir was Badalta (transforming) Kashmir. The objective was to energise the youth by highlighting the culture and tradition of Kashmir and instil in them confidence to take advantage of the facilities being provided and build their future. The platform was used by senior Army officers to create awareness and motivate youth in this direction.

While appreciating the efforts being made, it is necessary to remain sensitive of the fact that Jammu Kashmir, with a figure of 16.2 percent unemployed, has the second-worst unemployment rate among states/union territories in the country.

The educational standard, skill, efficiency and merit of the youth will always remain decisive factors in maintaining the pace of development and economic advancement. While the Government does what it can, the role of civil society, elders and role models towards motivating youth to move out and take initiative is most important.

The people of Kashmir have shunned the cult of the violence and opted for peace and prosperity. It is time for the complete leadership of Kashmir to respect their sentiments, drop politics of agitation and work towards rehabilitating their lives disrupted by decades of foreign sponsored militancy.