The purpose of this article is not to dwell on the political and social dynamics of the recent Gujjar agitation, but to highlight the pernicious internal security ramifications of such agitations and its impact on the internal security of the nation and cohesion of the armed forces. 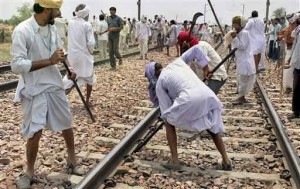 The armed forces has have so far been able to insulate themselves from such invidious themes and agitations by their sheer institutional and cultural strength inherited ironically from the colonial era.

Repeated onslaughts by self-serving, bigoted, vicious, narrow-minded and ambitious leaders and their parochial causes may destroy the very nature and edifice of the armed forces, which has the highest stake in internal security, national unity and cohesion. The agitation has given rise to many internal security concerns that are critical and need to be addressed cogently.

Vulnerability of the National Capital

As per a recent report one out of every six Indian lives in an insurgency dominated environment. Insurgencies, which were confined to the border regions of India, have now moved to the country’s heartland by way of Maoist insurgency affecting 40 percent of its territory. The much talked about the Red Corridor from Tirupati in Andhra to Pashupati in Nepal is no more an alarmist view, but a reality.

Even as the situation worsens, and the debate between the theoretical academicians, irresponsible human rights groups and the security establishment rages on, internal instability is moving towards the National Capital Region.

The frequency and scale of Maoist attacks on security forces and government property particularly railways is increasing by the day. Some state governments have been compelled to use helicopters and Unarmed Aerial Vehicles (UAVs) against the Maoists. It may not be far fetched to suggest that ultimately the Army will be sucked in. Even as the situation worsens, and the debate between the theoretical academicians, irresponsible human rights groups and the security establishment rages on, internal instability is moving towards the National Capital Region.

There is the time for debate and there is the time for decisive action. The relative interplay between the two has to be carefully calibrated. Nevertheless, we have allowed so many problems to fester and become unmanageable due to inappropriate calibration. The Gujjar agitation demonstrated the vulnerability of the national capital and demonstrated that it could easily be put under siege. It throws up many ponderables.

The government’s decision-making appeared to be paralysed even as routes in and out of Delhi were under control of the agitators. Perhaps petty politics was the restraining factor. It was symptomatic of the negligence and confusion that bedevils our decision-making process with regard to internal and external security. 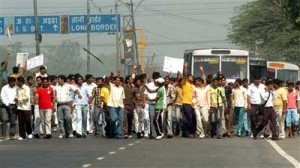 What happened was in the National Capital Region, the nerve centre of policy making and also one of the major investment destinations of present day India. It does give credence to many conspiracy theories being bandied about. We don’t seem to have learnt any lessons from 1984-Sikh Riots.

The absence of any contingency plan to deal with such situations was conspicuous. If that be the case in the country’s capital then why lament about the security situation in the border areas, the crime corridor and the Maoist corridor?

Even more nagging was the question of our threshold level as the national capital under siege was threatened with violence reminiscent of the medieval era. The menacing posture of the agitators armed with assortment of implements of violence betrayed their mood and intentions. The objects of their threat were normal, unsuspecting public and government property.

The Gujjar agitation was anything but spontaneous. Rather, it had the hallmarks of a well-deliberated and orchestrated plan indicative of a military mind.

Public transports including trains were stopped and windows of AC compartments smashed. The agitators had degenerated into unruly mobs. They could have well descended on other sensitive points including VIP areas in the heart of the capital. The security apparatus may then would have been compelled to use every available means of legitimate force, but imagine the escalation of violence and loss of lives.

Decisive and appropriate action should have been taken once the critical links between Delhi-Noida, Faridabad, Gurgaon and Rajasthan were blocked. The agitation was called off not owing to any pressure by the government, but because of the counter threat by another community i.e. the Meenas. In absence of any well-defined threshold levels and contingency plans, in future our Parliament or Rashtrapati Bhavan or PM’s Residence or Supreme Court may well be put under siege if mobs continue to have their way.

India’s political and social landscape is increasingly being characterised by mob culture, which constitutes the major internal security threat. It is the biggest distraction towards establishment of a civilised society. It is the biggest challenge to the rule of law. Larger the mob more is the impunity with which laws can be violated. A mob is a vicious phenomenon. It is basically a conglomeration of cowards, who seek refuge in collective courage and are therefore inherently violence prone.