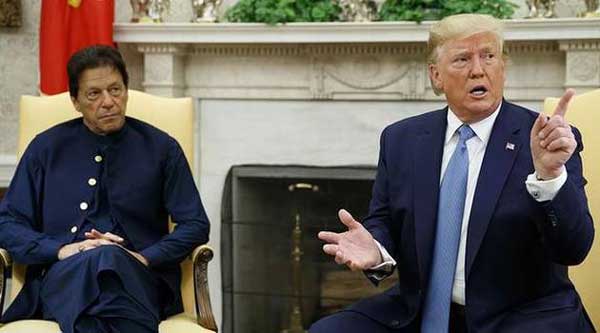 Seattle-based Andrew Boncombe believes US President Donald Trump could be the “clown”  who could solve Kashmir, albeit Boncombe doesn’t elaborate how adroitly Trump has muddled through Syria and North Korea, is about to mess up Afghanistan and gone head over heels with Pakistan. Another journo is talking of the rise of Boris Johnson, new British Prime Minister, as rise of the matching clown (matching Trump?), while a third describes Johnson, the great grandson of Ali Kemal Bey, who will be the end of Britain through Brexit – revenge of the Turks?

British journo James Butler describes Boris Johnson  whose laziness is proverbial and opportunism legendary, as a man well practiced in deceit, a pander willing to tickle the prejudices of his audience for easy gain, his personal life being  inconsistent and his  public record inconsequential. But Brexit apart, Butler’s description of Johnson would fit many politicians around the world. So has the era of geopolitical clowning arrived even as lying is in the blood of all politicians, be it Trump, Johnson or Pakistani Prime Minister Imran Khan.

Consider the now famous quote of Donald Trump sitting alongside Imran Khan, when he said, “I was with Prime Minister Modi two weeks ago and he actually said, ‘Would you like to be a mediator, or an arbitrator?’ And I said, ‘Where?’ And he said ‘Kashmir’,” said Trump. “If I can help, I would love to be a mediator.” India has categorically denied Modi asked Trump to mediate on Kashmir, while Larry Kudlow, Trump’s chief economic advisor (being referred to as Trump’s advisor on Kashmir?) says Trump doesn’t “make things up”. But there are a few issues here that need examination. Aren’t issues discussed between two heads of state without aides supposed to be sanctimonious?

So is Trump bringing up the topic part of his clowning, the other issue being he could nuke Afghanistan into oblivion in 7-10 days? Kashmir would have come up in the Modi-trump tete-a-tete but in all probability Modi asked Trump help to reign in Pakistani terrorism in Kashmir, which doesn’t amount to asking for mediation. Given Trump’s flip-flop, who in his right mind would ask for mediation, as has been proved by his romancing Imran.

During the Obama regime, when there were racial attacks against some Sikhs in the US, Vice President Joe Biden referred to Sikhs as “these sheikh people”. But how much does Larry Kudlow, the so-called advisor on Kashmir know about Kashmir when his entre profile is related to economics, aside from some wild remarks at political level. He would naturally support Trump knowing latter’s propensity to fire his aides and staff at the drop of a hat. Kudlow and for that matter Trump can hardly be expected to know the ground realities of Kashmir, some of which include:

•  Entire State of J&K was ceded to India by the then ruler of J&K through an Instrument of Accession signed on 26 October 1947, post massive Pakistan infiltration.

•  British officers of Pak Army also guided Pakistani infiltrators into Ladakh but were forced to retreat.

•  In 1948, Pakistani infiltrators were on the run but on behest of  Mountbatten the Indian Prime Minister JL Nehru decided to declare ceasefire and approach the UN – this again was British mischief.

•  The 1949 UN Resolution called for plebiscite, categorically ruling that first Pakistan must withdraw all its security forces from territory of J&K. However, Pakistan not only reinforced her security forces in J&K but also changed the demography of area through large number of settlers from the plains, which continues to-date. So the issue of plebiscite is dead.

•  Following the loss of East Pakistan and India taking 93,000 Pakistani prisoners of war in 1971, the Shimla Agreement signed by Prime Ministers of India and Pakistan on July 2, 1972, besides other issues categorically stated that “both countries resolved to settle differences by peaceful means through bilateral negotiations”.

The Shimla Agreement obviates any scope for third party mediation. China too has hinted mediation in the past. But it is abundantly clear that any mediation on this issue will be in the national interest of the mediator itself, not of India. Trump’s manipulation of the Modi-Trump dialogue on sidelines of G-20 needs to be seen in this context. When humpty-dumpty Trump is all set to handover Afghanistan to the Taliban, how can he be interested in acknowledging that the  original state of entire Jammu & Kashmir State is legally Indian Territory, Pakistan’s illegal occupation of J&K gave Pakistan a border with China it never had, and the strategic implications thereof.

Trump’s googly about mediation on Kashmir is obviously to butter up Pakistan to facilitate a safe exit from Afghanistan. But how could Trump be so naïve in believing Pakistan, even going to the extent of asking whether Taliban would agree to ceasefire. Either the businessman in Trump and Kudlow have overtaken strategic sense, being totally ignorant of ground realities,  or Trump is being misled by CIA who don’t want Trump to have a second term.  Overall, it does indicate a loss in rational thinking.

More than Imran Khan’s own lies, his entourage, his army chief, the DG ISI and the foreign minister in that order appear to have led Trump up the garden path.   Quite surprisingly, Trump did not direct Gina Haspel, Director CIA, apologize to Imran Khan, as she did recently to Osama bin-Laden posthumously, as also Laden’s family. Talking of wiping out Afghanistan in 7-10 days, Trump did give the impression of an excited boy having laid his hands on a toy scattergun first time.

Imran khan nevertheless is on pig’s back, smug that he has possibly averted the FATF blacklisting coming October and in the belief that Pakistan has replaced Afghanistan as buddy boy Trump’s Asia Pivot. But the utopia of safe exit from Afghanistan apart, Trump’s geopolitical clowning makes it abundantly clear that he respects nuclear power (North Korea) and even more the combo of nuclear power and sub-conventional muscle (Pakistan). India has much to learn from this with its focus mainly on economy and trade.

Trump’s hallucinations over Af-Pak would end if he gets to listen to the video by Al-Emara (Taliban’s official media arm) released recently online and promoted by the Taliban’s spokesman but America’s deep state may prevent that. Notably, highlights of the video include: blaming US for the   9/11 hijackings, describing it as heavy slap on their (American) dark faces; calling 9/11 it consequence of US interventionist policies and US taking Islam hostage; Islam’s prestige is at stake and so is Afghanistan’s tradition; it portrays the 2004 Madrid train bombings by al Qaeda-linked terrorists in the same light as 9/11; it includes scenes from various other countries, Palestinian protesters are also shown, and question raised if bombings are on because occupying Israelis are threatened; with respect to women, they are not given any rights but are being misguided;  Westernized culture is desecration of the creed of a nation and degradation of Afghanistan’s cultural heritage, and; can promoting Western ideas ever be considered civilization and improvement?”

In backdrop of the above video, Trump beseeching Pakistan and asking whether Taliban would agree to ceasefire, is akin to prayers of a babe lost in the woods frequented by hordes of carnivores. Amidst irrational calculations for a second presidential term, Trump fails to see that exit from Afghanistan would be a major milestone in the decline of America’s geopolitical power in Asia, notwithstanding plans to destabilize Iran and Central Asia.

As for the exit itself, Pakistan-supported Taliban will remain Trump’s nemesis and who knows plans for a grand exit may already be underway; a lesson Trump may not forget easily. Yet, we may see more geopolitical clowning in coming months.

One thought on “Geopolitical Clowning”