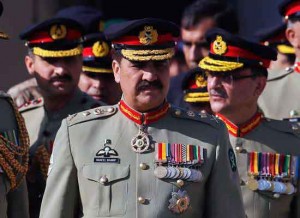 How the mighty fall!! General Raheel Sharif, the larger than life chief of the Pakistan Army, has reduced himself to a mere Public Relations Officer (PRO) in his desperation to do something that would build on his post-retirement plans.

On Wednesday, 16 November, he gave a statement to the media that 11 Indian soldiers were killed on November, 14, after Pakistan Army responded to unprovoked firing along the Line of Control (LOC). “India should “show courage” and own the deaths of its security personnel,” He added while also rendering the statutory warning that Pakistan would deliver a “befitting response” to any hostile enemy action.

Hiding of casualties regularly happen in Pakistan under the watch of dishonourable senior officers. General Musharraf hid the Kargil casualties and Gen. Sharif, has not made public the casualties that his army has suffered…

It is silly on the part of the Pakistan Army Chief to insinuate that India would hide such a fact. Firstly, India has no policy of keeping the martyrdom of her brave soldiers a secret. Secondly, even if the government or the Indian Army does try to do something like this, the proactive and free media of the country would not allow the same. India has, very rightly, denied such casualties having taken place.

Hiding of casualties, however, regularly happen in Pakistan under the watch of dishonourable senior officers. General Musharraf hid the Kargil casualties and Gen. Sharif, has not made public the casualties that his army has suffered in the ill fated Operation Zarb-e-Azb, against the Pakistan Taliban (TTP) in the North West Frontier Province of the country.

On the eastern border with India Gen. Sharif is stuck in a Catch-22 type of a situation; if he stops violating the cease fire he will lose face in the twilight of his career and if he continues violating the ceasefire, the Indian Army will resort to massive retaliation which will invite substantial casualties since Pakistani posts do not have concrete bunkers (as on the Indian side) and are, as such, vulnerable to shelling.

In order to maintain the sagging morale of his troops on the border while continuing the ceasefire violation Gen. Sharif has no option but to mislead his own troops with blatant lies about casualties on the Indian side also.

He also has to keep the massive militant and terrorist infrastructure, which is the strategic asset of the Pakistan Army, on his side in order to keep the Nawaz Sharif led government on tenterhooks. What better way than to do some sabre rattling against India?

Prime Minister Nawaz Sharif is a votary of improving relations with India. He would never be in favour of holding sabre rattling military exercises so near to the Indian border…

Sharif is conducting a massive military exercise “Strike of Thunder” along the border in Punjab which has been witnessed by the Pakistan Prime Minister. The drill shown to the Prime Minister constituted a joint operation involving fighter planes, tanks, artillery and missile fire and a host of other weapons.

It is well known that Prime Minister Nawaz Sharif is a votary of improving relations with India. He would never be in favour of holding sabre rattling military exercises so near to the Indian border at such a sensitive time when tensions between the two countries are increasing.

It is quite obvious that he has been compelled by the army to register his presence in the exercise to send out a belligerent message to India. Seeing him being thus manipulated by the army due to the personal ambition of the Army Chief is very sad indeed.

It may be noted that Gen. Sharif is due to retire on 30 November 2016. His relief has not been named by the Government of Pakistan even though less than two weeks are left for him to demit office. The delay in naming the new incumbent flows from Gen. Sharif‘s search for the best post retirement option for himself. Till he makes up his mind Prime Minister Nawaz Sharif can do nothing other than wait.

Gen. Sharif has number of options in his post retirement plan. The first is to go for an extension; the second is to retire and overthrow the incumbent government through what is being termed as a “judicial coup,” wherein, Prime Minister Nawaz Sharif will be ousted on the Panama papers based corruption charges. Once the government is ousted, Raheel Sharif would smartly step in as a chosen leader of a coalition of parties that are aligned with the Pakistan Army. Thus, will be established a dictatorship within the democratic set up.

Any soldier who has lived a life of honour and dignity in accordance with the high traditions of the service, would be embarrassed by the antics being played out by Gen. Raheel Sharif.

The main reason for doing all this is to curtail political effort to build bridges with India that Nawaz Sharif is inclined towards and the Pakistan Army is dead against.

The game plan being adopted by Gen. Sharif in his post retirement plans has been played out in a very crude manner. In July, when the idea was for him to go for extension, posters came up in all major cities urging the General to impose martial law instead of retiring.   Now, when the plan has been changed to his quitting the army and fighting elections, there are banners all over urging the General to contest election to end tension between the military and the Government.

Since government officials cannot enter politics for at least two years after leaving service, the banners are going to the extent of demanding that the mandatory period be reduced to facilitate Raheel Sharif.

Any soldier who has lived a life of honour and dignity in accordance with the high traditions of the service, would be embarrassed by the antics being played out by Gen. Raheel Sharif. He comes across as blatantly self serving, unscrupulous, un-gentlemanly and unpatriotic. Drunk on power, he has thrown basic principles to the wind and is ready to go to any extent in pursuing his immoral ambitions.

Senior army officers in Pakistan are now not only deciding on between civil government and dictatorship but also a particular kind of dictatorship that suits them. The people of Pakistan should deeply introspect upon the repercussions of allowing the generals to hold a nation to ransom in this manner. Now is the time for the righteous in Pakistan to stand up and be counted. Gen Raheel Sharif as a dictator will be an unmitigated disaster for the country.