A decade may appear to be a microcosm compared to the infinity of time, however, when measured on the scale of geo-politics, a decade can often become an eternity. Viewed in the context of the decade long blood-letting in the Middle East since the US led invasion of Iraq, it would be fair to revisit the US Mission of ‘Winning the Global War on Terror’ and the ‘promotion of freedom as an alternative to tyranny and despair.’[1]

The aim is to highlight the external reasons for the conflict, a conflict that has little chance of waning, since there are major interests involved.

The issue is relevant since far from eliminating terror, not only is the Al Qaeda network intact, their acts of terror have been surpassed by the brutal Islamic State of Iraq and Al Shams and/or the Levant (ISIS/ISIL). In neighbouring Syria, the ‘externally fuelled’ civil war continues and in the last four years, close to 300, 000 people have lost their lives, making Syria the ‘human tragedy of the decade.’ Indeed, the macabre dance of death being played out in the Middle-East, is a travesty of freedom and peace.

While there are deep rooted reasons for the situation to have manifested in the way it has, the reason of its precipitation is common – the Middle East remains an arena for external players to play geo-strategic games. From carving out artificial states out of the erstwhile Ottoman Empire to the campaign to eliminate terror by the USA, the name of the game has ‘been’ and ‘remains’ imperialism. The aim is to highlight the external reasons for the conflict, a conflict that has little chance of waning, since there are major interests involved. At the same time, an attempt is being made to make sense of the chaos as evident from some of the apparent contradictions:

Iran which not so long ago was an international pariah, has suddenly transformed to a potential ally to combat the ISIS.

Lord Palmerston has been proved right: ‘Nations have no permanent friends or allies, they only have permanent interests.’ While a background of the historical, geographical and socio-economic reasons have been provided to simplify the context of this volatile mix, it is highlighted that it is the added factor of ‘external support’ that provides the high octane fuel to keep the flames of this conflict alive. 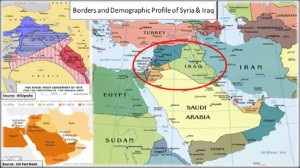 Demography and History of the Region

Demographics.  Essentially part of the larger Arab (Bedouin) nation, Iraq and Syria (including the Christian dominated Lebanon) were carved out by France after she received the territory as part of her share after the First World War; an outcome of a secret agreement (Sykes-Picot) brokered between Britain and France. On her part, Britain retained Trans-Jordan in the south and controlled it with brute force between the two wars. Israel was subsequently created out of this territory as a nation state in 1948, and became a haven for displaced Jews after the horrific persecution of Zionists in Europe.

The Cold War was more about securing energy resources of the Middle East, than over ideologies…

The larger question of Palestine,[2] the quintessential home for Christians, Jews and Muslims, in the form of an(utopian) Palestinian Stateis a task left to future generations. Since it remains an unsettled question, it keeps the Zionist-Muslim conflict alive. Another unsettled question is in the form of the nationality of the 28 Million Kurds who inhabit the North Eastern Mountains of Iraq (5-6 million), Northern portions of Syria (2 Million), apart from those overflowing into neighbouring Iran (6 Million) and Turkey (14.5 Million).[3]

Historical background.   Both Iraq and Syria were part of the Safavid Empire of Persia and later of the Ottoman Empire and remained that way till the First World War. As victors, the French and the British divided the territories as given in the above map. It is pertinent to add that this division was without consideration for religion, sect or tribe/clan – it was arbitrary. This historic fact lies at the root of the problems as they confront the region even today; the straight lines of the agreement and the general alignment of the current borders make this fact evident. 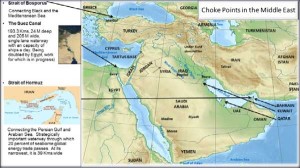 The central location of the region, wedged between Europe and Asia on one side, and providing access to the sea in the south (Iraq) and West (Syria), and opening up a land route to the troubled underbelly of Russia, makes for a multitude of reasons in terms strategic advantages and vulnerabilities. On the other side, with a large border with Iran, another adversary of the western world, Iraq offers the ideal flank combined with Turkey in the North and the Sea in the south for the USA to keep Iran’s ambitions for regional dominance in check.

Pivoted around Iraq and Syria, the physical features that make up the land and sea scape of the region have shaped its destiny. Though the water bodies surrounding the arid landmass are inter-connected, they offer vulnerable choke points. In the south, the region is connected to the Arabian Sea through the narrow Straits of Hormuz, while the Suez Canal connects the Mediterranean and Red Seas, making them vulnerable choke points. Connected to Europe by a narrow isthmus in Turkey, through which passes the Straits of Bosporus, the arid land of Iran in the east blends with the bleak mountains of Afghanistan and Baluchistan in Pakistan. Towards its North, lie Turkey and beyond her territory, the troubled frontier regions of Georgia and Albania, presenting the underbelly of Russia. 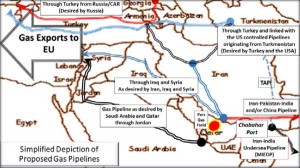 The Politics of Energy

Energy fuels the world, and control over this vital resource is a major driver of global geo-politics. Adding to the volatility, gas and the alignment of its pipelines has gained salience as this has become the fuel for the future. In practice, global politics of energy manifest in four ways:

…Qatar supported by Saudi Arabia want to pipe gas to Europe through Jordan, and by so doing, prevent Iran from tapping this lucrative market directly.

The Cold War was more about securing energy resources of the Middle East, than over ideologies – the Western World led by the USA coveted this resource and by extension, deny them to the Soviet Union. After the Cold War, Russia became a significant energy exporter and a principal supplier of gas energy to Europe, while China followed by India, the mega economies of Asia became large consumers and net importers. Around the same time, the USA reduced her dependency on energy imports from the Middle East by adding to her gas reserves by large-scale fracking and diversifying energy imports from Canada and other American suppliers. While this changed the demand-supply situation, a combination of factors like the reserves available in the Middle East region and the requirement to prise the stranglehold Russia has on the European Market by opening alternate supply lines from the Central Asian Republics through Turkey became the new game. At the same time, the USA and Russia are both wooing Turkey as she provides an alternate link to southern Europe. At the same time the USA is ensuring (adequate) instability in Syria and Iraq.

One thought on “Games Nations Play: The Middle East Conflict — A Game of Gas Pipelines”