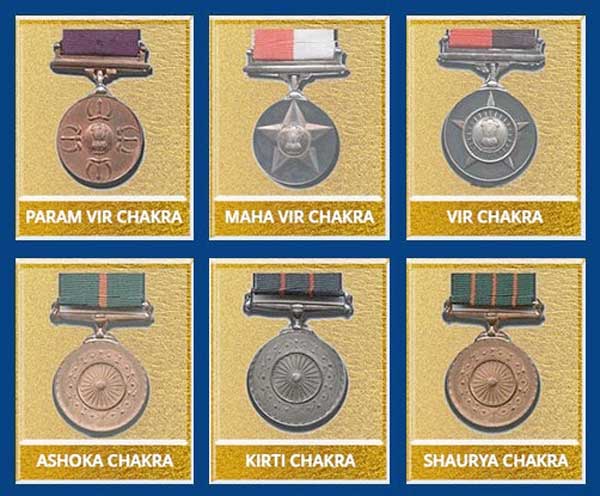 Militants tend to attack innocent citizens, usually in places where people come together in relatively high concentrations.  In the experience of Indians, militants have targeted aircrafts and trains, bombed government facilities, and attacked public places like general markets and high-profile hotels.  Faced with militant threats, many Indians have demonstrated gallant responses, both in India and abroad. This article addresses gallant behavior that has been observed when decision makers are suddenly confronted with militant threat.  A militant threat prevails when an external agency with a cause that is potentially harmful or otherwise contrary to the interest of the decision maker’s greater society, presents itself in a vigorously active, aggressive, or combative manner, usually with an element of surprise or without advance notice.  Faced with such situations, gallant decision makers have exercised brave choices that may be described as chivalrous, valiant, heroic, bold, and fearless.  As stated by Nelson Mandela, fearlessness is not about absence of fear, or not being afraid, but rather it is about conquest of it or about triumph over it.[1]

The Scale of Militancy in India

In 2016, India was the third largest target of terrorism, after Iraq and Afghanistan but before Pakistan. “Out of a total of 11,072 terror attacks in 2016 worldwide, India bore the brunt of 927, 16% more than 2015 (798).”[2]  Of these, 317 terror incidents were by the Maoists, also known as Naxalites, albeit down from 866 in 2015.[3]  The remaining two-third of all militant incidents in India related mostly to infiltrations across the Line of Control between India and Pakistan, in Jammu and Kashmir. It is notable that since 1987, or the past thirty years, of 43 Ashoka Chakras[4] awarded by the Government of India, 27 (63%) went to those valiant individuals who stopped terrorists infiltrating into India in the Jammu & Kashmir region, and additional 10 (23%) to those who confronted terrorists in Mumbai, Delhi, and Kabul, who were clearly handled or assisted out of Pakistan.  Six Ashoka Chakras (14%) were awarded to brave individuals who confronted the Maoists or Naxalites in the northeastern states.  Some of these, too, had foreign links.

Counter insurgency efforts cost India dearly in terms of its precious treasury of life and blood.  Of the 43 Ashoka Chakras awarded since 1987, 42 were awarded posthumously! Recipients have included individuals like Pan Am air-hostess Neerja Bhanot, Constable Kamlesh Kumari Yadav, Naib Subedar Chuni Lal, Havaldar Hangpan Dada, and others. On 5th September, 1986, Neerja Bhanot, merely 23-year old, stood up to members of the Libyan-backed Abu Nidal Organization during the hijacking of Pan Am flight number 73 in Karachi, Pakistan, and saved American and other lives. Passing up on a subsequent opportunity to escape, she stayed on to protect additional lives. On 13th December, 2001, a petite policewoman, Constable Kamlesh Kumari Yadav was armed only with a wireless communication device, when militants attempted entry into the premises of the Indian Parliament House. Her timely alarm and shutting of the entrance gate saved many members of parliament and other national leaders.  By 1987, Naib Subedar Chuni Lal had already received the Vir Chakra and the Sena Medal for prior acts of gallantry. On 24th June, 2007, he deliberately confronted militants on the Line of Control and eliminated them in direct combat.  Havaldar Hangpan Dada had asked to be assigned to the Jammu and Kashmir area, where, on 26th May, 2016, he engaged infiltrating militants, eliminating them.  His intervention included a hand-to-hand combat,. These gallant Indians, like most other Ashoka Chakra recipients, were killed in the performance of their respective acts of gallantry that saved lives of others.[5]

In every instance of gallant response to militant threat, as in the cases cited above, we see certain common features:

One can think of the options available to the individual as a conflict between their self-interest and social responsibility.  In each case, they are faced with conflict between (i) their individual obligations to stay alive for themselves and their respective their families, and (ii) interest of others, such as to save the lives of others, even strangers.  The gallant respond to their respective social responsibility. For each of them, the cost associated with self-preservation would be low, but the cost of saving others is high, borne by them alone – in terms of high likelihood of losing their life. In each case, they accept the risk to their own life.

The gallant are virtuous individuals.  To be virtuous, the individual must first recognize the dilemma; that is, he or she must recognize (i) that there are conflicting obligations or responsibilities to be met, and (ii) that there is no solution that would satisfy all demands of the situation.  The individual must make an informed choice, with awareness of the consequences posed by the alternative actions available to him or her for all parties affected.  With little time for research or analysis, enlightened wisdom facilitates the decision-making process. Therefore, knowledge, not just information, is a prerequisite for their gallant, virtuous decision-making.[6]

Enhancing the Propensity for Gallantry

Various models for the resolution of dilemmas, taught to decision makers, are predominantly rule-based or rule-directed.  In practice of facing militants, however, decision makers do not usually enjoy the benefit of being forewarned. They identify problems, formulate solutions, and implement plans, while performing under varying degrees of stress, engaging in parallel sets of concomitant activities, and interacting with a number of people over a range of decisions, all within a time constraint.  When managing militant threat, there is little time to apply rules and compute pay offs for various alternatives.

To deal with dilemmas, organizations often ask their members to conform to a communal, professional code of behavior.  This facilitates a transition from personally and individually articulated conduct to collaboratively interpreted professional response.  Such codes can be very effective.  Khan Abdul Gaffar Khan raised an army of nonviolent Khudai Khidmatgars on such a code, with his soldiers swearing “…to seek freedom of the country, obey all legitimate orders of all officers all the time, live in accordance with the principles of nonviolence and refrain from taking revenge, forgive those who oppressed them or treated them with cruelty, live a simple life, practice virtue, never seek reward for service, and so on.”[7]

The Indian Armed Forces, too, administer an oath of allegiance to the Constitution of India to its members: For instance, the officers being commissioned into the Indian Army take the following oath: “I hereby solemnly swear that I will bear true faith and allegiance to the Constitution of India, as by law established and that I will, as in duty bound honestly and faithfully, serve in the regular Army of the Union of India and go wherever ordered, by land, sea or air, and that I will observe and obey all the commands of the President of the Union of India and the commands of any officer set above me, even to the peril of my life.”  Other measures are taken to instill into the officers and personnel of the Indian Armed Forces a deep sense of service to others.  Throughout the period of training and development, young men and women are intensely exposed to symbols of duty and honor, and to peer-pressure of high expectations.  For instance, at the Indian Military Academy in Clement Town, Dehradun, the following words from Field Marshal Chetwode’s 1932 inauguration speech are inscribed on an oak paneling at the Eastern entrance to Chetwode Hall:

The goal of the acculturation is to make gallantry an innate nature, a svabhava.  When Field Marshal SHFJ Manekshaw, PV, PB, MC,[8] stated, “If a man says he is not afraid of dying, he is either lying or a Gurkha”, he was referring to this concept of svabhava of the Gurkha![9]

This article has described a set of common features found across actions of gallant individuals who confront militant threats. In India, we have seen gallant decision makers exercise brave choices, often paying dearly for their valor with their life. Such decision making behavior of gallantry has not been adequately studied.  It seems that the gallant decision makers are able to push themselves beyond coping, knowing well that their actions carry a high cost for them, but the benefits are to their larger society.

[4] Ashoka Chakra (AC) is India’s highest peacetime award for gallantry and valor. The other peacetime gallantry awards are the second highest, Kirti Chakra (KC) and the third, Shaurya Chakra (SC).  When gallantry is observed during war, the recognition is through the war time Chakra awards, namely the Param Vir Chakra (PVC), the Maha Vir Chakra (MVC) and the Vir Chakra (VrC).

[5] The individuals named here are chosen only for illustrative purposes. Their mention does not suggest relative superiority of their respective behavior of gallantry.