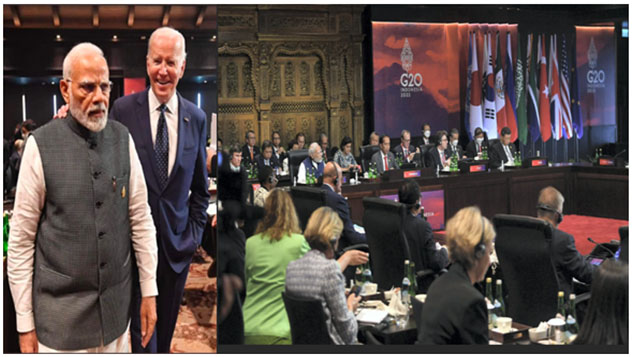 India received the G20 Presidency at a ceremony at the close of the recent G20 summit held in Bali, Indonesia on November 15-16; the G20 Presidency gavel was transferred from Indonesian President Joko Widodo to Indian Prime Minister Narendra Modi. India’s presidency will begin on December 1, 2022, leading to India hosting the 18th G20 Summit at New Delhi, in the fourth quarter of 2023. Since its inception in 1999, G20 has addressed  major issues related to the global economy like international financial stability, mitigating climate change,  and sustainable development.

For the Bali summit, Widodo rejected the US demand to not invite Russian President Vladimir Putin. However, Ukraine President Volodymyr Zelenskyy was allowed to address the summit through video on America’s insistence though Ukraine is not a G20 member. Russia being a G20 member, Putin should have also been invited for a video-address but this was not done indicating G20 has become America’s fiefdom.

The US also wanted the G20 Leaders’ Declaration to unreservedly condemn Russia for invading Ukraine. However, because of differences among member nations, the declaration, admitting G20 is not the forum to resolve security issues, said “most members” strongly condemned the war in Ukraine causing immense human suffering and exacerbating existing fragilities in the global economy. The declaration also quoted UN resolutions condemning Russia and that use or threat of using nuclear weapons is inadmissible. It also spoke of peaceful resolution of conflicts, efforts to address crises, as well as diplomacy and dialogue, and “today’s era must not be of war” – echoing what Modi told Putin on the sidelines of the SCO summit in Uzbekistan in September 2022.

At the G20 Summit at Bali, Modi stressed on: ceasefire and diplomacy to end the war in Ukraine; collective resolve to ensure peace, harmony and security in the world; address global crisis of supply chain disruptions in essentials, food, fertilizers etc; remove restrictions on energy supplies, and; time-bound affordable finance and sustainable supply of technology to developing countries for inclusive energy transition. Modi also said that bodies like the United Nations are unsuccessful in tackling issues of our times.

Numerous American scholars, strategists, former diplomats and officials, including former CIA and FBI officials, have pointed out how the US left no option to Russia other than invading Ukraine. The reason was not only NATO expansion to the Russian borders but also the genocide in the Donbas region of Ukraine; latter akin to India invading East Pakistan in 1971 because of Pakistani Army’s genocide.

In addition to the above countering the US propaganda condemning Russia, the article ‘Blame the Deep State for Carnage in Ukraine’ dated November 16, 2022 published in The American Conservative by George D O’Neill Jr (https://www.theamericanconservative.com/blame-the-deep-state-for-carnage-in-ukraine/) must be read. Most interestingly, he writes: “The Rand Corporation is a Deep State think tank which has helped engineer most of the US foreign interventions since its founding in 1948. But even the Rand report summary warns against going so far as to precipitate military action. Apparently the brain-trust of Nuland, Biden, and Blinken didn’t read that part. For years, they have made Ukraine a de facto member of NATO, a neutral nation in name only. Since the 2015 Minsk treaty, they have poked the bear—and they kept poking until the bear lashed out. How does that serve America’s interests?”

Biden defied the Rand advice perhaps to deflect from the shame of Afghanistan but because of Ukraine he and his administration are responsible for causing what the declaration mentioned; immense human suffering and exacerbating existing fragilities in the global economy which includes energy and food shortages, disruption of global supply chain and dividing the world in two halves in a bid to remain global leader and make more money.  Zelenskyy even fired a missile into Poland to bring more pressure on Putin at Bali, but the US-NATO backed off knowing how Putin would react to such false accusation.

Global economy no doubt was affected by Covid-19 but the Ukraine conflict has hit it equally, if not harder, and is continuing.  The US has indulged in ‘economic terrorism’ through arbitrary manipulation of the SWIFT system which provides services of financial transactions and payments between banks worldwide. In addition, the US has been freezing foreign assets in Central Banks.

America’s Machiavellian manipulation of the global economy dates back to the Nixon era in 1971 when it completely severed the link between the US dollar and gold. Moreover, the rate of exchange for all currencies was linked to the US dollar where US would redeem a dollar for its value in gold, making the US dollar the official reserve currency. This allowed other countries to back their currencies with dollars rather than gold. So, the US continues to indulge in economic terrorism despite its external debt around US$ 31 trillion.

In July 1991, the RBI had to pledge 46.91 tons of gold with the Bank of England and the Bank of Japan to raise US$ 400 million albeit India was quick to repurchase it months later as the situation improved.  The US has demonstratively weaponized the dollar and has refused to honour its commitment as a reserve currency whenever it so wishes. Therefore, the world needs to speedily look at alternative currencies for trading as well as for holding reserves.

Europe is slowly waking up to how Washington has taken it for a ride. German Chancellor Olof Scholz recently led an economic delegation to Beijing and the recent formal meeting between Chinese President Xi Jinping and Australian Prime Minister Anthony Albanese at the 2022 G20 Summit indicates thaw in China-Australia relations, though its future direction would depend on how much Australia can free itself from the American yokel.

Nature’s fury made the world sit up and take cognizance of climate change and UN General Secretary António Guterres recently said that polluters should be made to pay. Shouldn’t the Biden Administration be fined as top polluter in the world having consigned Europe to burn coal in winters because of its game of sanctions leading to energy shortages? Also under Donald Trump, didn’t the US withdraw from the Paris Accord because he considered climate change crap. 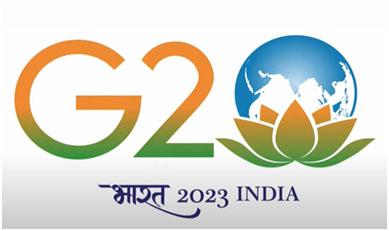 Releasing the logo for the G20 Summit India will host next year, PM Modi said, “Notion of universal brotherhood is being reflected via the G-20 logo. The lotus in the logo of G-20 is a symbol of hope in these tough times”. Earlier at Bali he had stated that India will make the G20 a “catalyst for global change” and its presidency of the group in 2023 will be inclusive and action-oriented.

However, global organizations have become more rhetorical because of major nations. For example, the declaration of the 2022 G20 Summit talks of peaceful resolution of conflicts through diplomacy and dialogue but are the P-5 following this? China invaded Ladakh in 2020. The US-NATO arbitrarily attacked and invaded numerous countries in the past and now forced Russia to invade Ukraine. Even today, the US refuses to dialogue with Russia for a ceasefire in Ukraine; only the CIA Director has warned Russia not to use nuclear weapons.

The drama of Zelenskyy addressing various forums will continue with Biden grinning away and harping on the so-called “rule based order”, which may also be the scene during the G20 in 2023. At Bali, Biden was spotted with a detailed “cheat sheet” with instructions where to, when to make remarks and when to pose for pictures.

With the GOP having taken control of the US House of Representatives, there are reports saying Hunter Biden’s dealings would be investigated. Some deep digging can be expected with the presidential election due in 2024. At the same time, Ukraine cannot win the war, as succinctly reasoned by Scot Ritter (https://www.youtube.com/watch?v=JCR-Phtgx0k). But will the Biden Administration let peace return to Ukraine? In all probability, Zelensky will be instructed to keep attacking Donbas in order to keep Russia bleeding. The UN also will likely remain as ineffective.