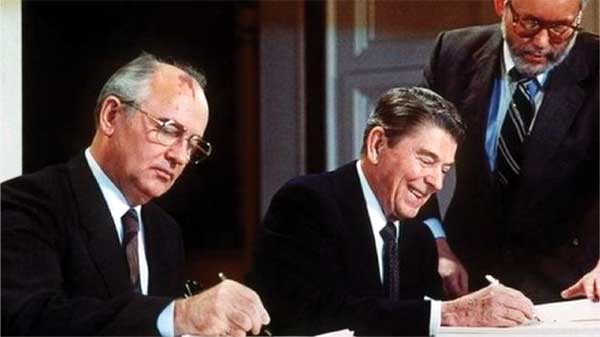 In late 1960s , there was a growing understanding between the USA and USSR that it served the interest of both these powers  and the world to have a negotiated curb on their nuclear arms competition .Bilateral nuclear arms control talks between them began in 1969 with the Strategic Arms Limitation Talks (SALT). In 1960s USA had over 30,000 nuclear weapons and erstwhile USSR had more than 40, 000.Next five decades saw the nuclear arsenal of USA and USSR reduce to 4000-4500.

Early treaties such as the 1972 Interim Offensive Agreement and the 1979 SALT II Treaty merely slowed the acquisition of nuclear arms. Later treaties had a more serious impact. The 1987 INF Treaty banned the entire class of U.S. and Soviet land-based missiles with ranges between 500 and 5,500 kilometers (kms). The 1991 START Treaty required the sides to reduce their strategic nuclear warheads by over 40 percent while reducing strategic missile launchers and bombers by about 30 percent. The New START effective in 2011 put further restrictions and new terms for cooperation to achieve transparency.

Intermediate Range Nuclear Forces Treaty (INF) came to an end on 02 August 2019. This historic treaty, signed in December 1987 by Reagan and Gorbachev , banned an entire range of nuclear, land based ballistic and cruise missiles with the range of 550-5000 kms In pursuance of the terms of the treaty over 2700 total missiles of  this range were destroyed collectively  by US and USSR ,now Russia by 1991. It made Europe free of Nuclear weapons and ushered in an era of peace in the world that ended on 02 August 2019.

Amongst the many reason for the termination of this historic treaty are the US and NATO allegations on Russia for developing and deploying 9M 729  mobile cruise land based missile system  which as per them violated the INF . US too has been keen to terminate INF to counter threat to its assets in the Pacific region by China and North Korea. Russia in 2007 too had doubted the efficacy of INF quoting US walk out from the Anti Ballistic Missile Treaty in 2002.

Coming on the heels of the termination of INF is the hotly debated topic of the fate of the renewal of the New START, which is due in February 2021. New START was signed between US President Obama and Russian President Dmitry in April 2010 and became effective from 05 February 2011. The main aim of the treaty was to limit the size of the American and Russian Nuclear Arms and their Delivery systems. It permitted both the nations to keep a track of each other’s nuclear arsenal development, to curb distrust and misunderstandings. They agreed to share data and conduct mutual inspections. The main highlights of the New START were:-

•  Both countries could not have more than a total of 700 Delivery systems each inclusive of all Intercontinental Ballistic Missiles (ICBMs), Submarine Launched Ballistic Missile (SLBMS) and Long Range Bombers armed with nuclear warheads, in their kitty.

•  Possession of Nuclear Warheads was restricted to 1550 to each nation.

•  Both countries were restricted to a total of 800 of a combination of ICBMs, SLBMs and Long Range bombers , irrespective of whether they were Nuclear capable or not.

•  Both countries were to provide data of movement of their nuclear arsenal, everyday, whether it was operational, training or a movement to undergo repairs. Till date over 16000 such notifications on movement data has been exchanged.

•  Each country was allowed 18 inspections of their nuclear facilities, each year. This lifted the veil of secrecy which was prevalent in Cold War era and ushered in an era of trust and faith.

The New START Treaty terminates in February 2021. However there is a proviso in the Treaty that the US and Russian Head of States can extend the Treaty for another five years, without reference to anyone.

As per reports, in February 2017, Russia suggested the extension of the New START treaty till 2026. The present US administration   rejected the request, stating that the deal was unfavorable to USA. It termed the treaty as a “Unilateral Disarmament Treaty for USA” and non renewable in its present form.

Today, in the execution of New START, many a mistrust has crept in due to the following reasons:- 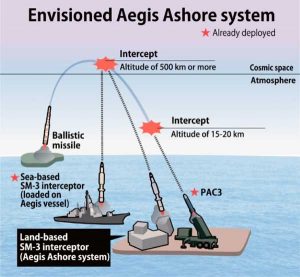 •  Russia has strongly objected to  US deployment of Aegis Ashore Missile Shield in Deveselu, Romania and preparation of another site at Redzikowo  , Poland , on the grounds that it violates 1987 Intermediate –range Nuclear Force Treaty (INF) .It further is wary of the  capability of this “ Missile Shield” to fire medium range nuclear armed Tomahawk cruise missiles.

•  US has accused Russia of testing mid range missile systems, specially banned under the INF. 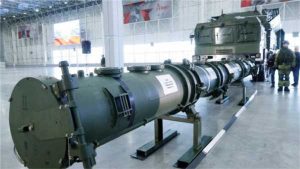 •  US also has objected to  Russian plans to deploy Nuclear missiles at Kaliningrad Enclave between Poland and Lithuania and its operationalisation of the Ground Launched Cruise Missile system BM 729.

•  The reported increase of Russian nuclear warheads by 300, over the US held total is too a hindrance, spoiling the spirit of New START.

Today it appears, USA and Russia are in a Nuclear Arms race. USA, in February 2018 outlined its nuclear aim in its Pentagon release “Nuclear Posture Review”. The key points of this policy are:-

•  To retaliate to Cyber attacks with low yield weapons.

In the meantime, President Putin on 01 Mar 2018 announced Russia’s wish list to enhance its nuclear capabilities. Two main points of his vision are:-

•  To produce a nuclear powered cruise missile, which can hit any target in the world, at a speed which will defeat all existing missile defence system – an “Invincible Missile” concept ?

•  To develop Drone nuclear powered, nuclear armed Submarines which can target any port around the world.

All nations in the world and UN are aghast at the demise of INF. It is sheer common sense that the New START renewal talks must begin now to enable it to be renewed before February 2021. However for both US and Russia, China has emerged a major area of concern the renewal of New START.

As China emerges as a super power, the world is witnessing rapid modernization of of its armed forces. In recent years, US, Russia and the world have become wary of its growing nuclear and conventional missile inventory, mostly in the ranges of 550 – 5000 kms, banned under the INF.

China, wary of invasions from its East coast in history from repeating, namely the Opium Wars and the Japanese invasion, is strengthening its Eastern sea board. It has claimed the South China Sea and has created artificial islands on which military assets have been deployed.  South China Sea has become a flash point due to frequent naval clashes between Chinese and US and its allies.

US, which has major strategic interest in the Western Pacific sea board would like to contain China which is unlikely but it will definitely ensure to keep the international sea and air routes of communication free in Western Pacific including the South China Sea. It would also like to reassure its allies in this region that it is and will remain a Pacific power capable of countering any threat from China.

China, a nascent power back in 1987 , when Reagan and Gorbachev inked INF, is today a country with a fairly large arsenal of Ballistic missiles of various ranges, cruise missiles with land , air and sea version of these missiles tested and deployed  . Some of these vehicles are nuclear tipped too. Its nuclear triad is complete.

In 2015 China deployed Dong Feng -26 ballistic missile system with a range of 3000-4000kms, capable of striking all US bases in the Pacific and most Russian and Indian bases.

China, in its White Paper on Defence published in July 2019,  has stated that its Nuclear arsenal and the ballistic and cruise missiles are for Defence of Chinese territory only and they will be always deployed only in China and never in a third country.

France, UK, Israel, Pakistan, India and North Korea are the other nuclear power in the world.

China, Israel, India, Pakistan and North Korea have gained this arsenal after 1987 INF deal. In 2011 too were probably too insignificant a threat to be included in the New START.

France, UK and India having completed their nuclear triad by developing the capability of deploying nuclear arms on delivery systems based on land, air and sea.

As per Federation of US Scientists July 2019 data the number of Nuclear Warheads likely to be held by various countries are as given in the table below. 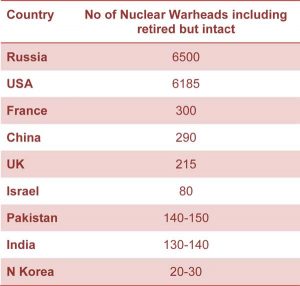 Ballistic and Cruise missile arsenal of Iran and its quest for enriching Uranium to weapon grade had prompted UN led consortium of nation to negotiate  the historic Joint Comprehensive Plan of Action  ( JCPOA) on 20 July 2015  , effective from 16 January 2016 . However on 08 May 2018, US walked out of the deal, though the other six members and Iran still haven’t officially done so.

North Korea with its nuclear and missile arsenal and its belligerence towards US, Japan and South Korea is too a force to reckon with. Its recent attempts to trial evaluate a submarine and short range missiles add new dimensions to the existing nuclear threat in this region.

Recent reports also suggest that both Turkey and Saudi Arabia too are in the process of developing their nuclear arsenal.

The Need of the Hour

The New START treaty focused on Long range missile, bombers and Launch platforms and didn’t include Low yield weapons or Cruise Missiles. Nor did it include the nations which today posses’ nuclear weapons and their delivery systems. Both should be included in a new treaty.

It is understood that the nations whose arsenals don’t match that of the Big Two will argue  that to cap any further increase in their arsenal ,  the Big Two should either freeze their arsenal at the current levels or reduce them to an agreed level. But these are matter of detail which will be solved through discussion. The crux is that the talks for New Treaty must commence at the earliest.

The need of the hour is to work on a new Treaty. But till a new Treaty is implemented, it is imperative that the New START be extended for another five years, more for the safe guards of exchange of information and Inspection, it provides.

The future warfare will be in the realms of Artificial Intelligence, Robotics and Hypersonic delivery systems. Advances in technologies will create a new range of weapons from cyber to genetics. Therefore this is not the time to abandon existing disarmament agreements but to enlarge their scope and if possible, extend into domains of new technologies.

If New START is not renewed and is allowed to lapse in 2021, US and Russia will find themselves in a world where no Strategic Arms Control Treaty exist for the first time since 1969. It will be a world in which there are no constraints on the numbers of nuclear armament and their delivery mechanism. This will make the world a very dangerous place.

US on 18 August 2018 has tested a Tomahawk Missile from a vertical launcher MK 41 , which is also used in Aegis Ashore Ballistic Missile defence system deployed in Romania and Poland, The missile hit target over 500 kms away, a range banned under the INF. The Nuclear race is ON.