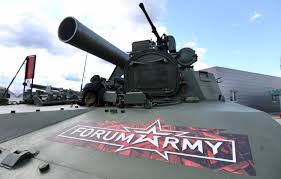 International Military Technical Forum (called Forum in short) is an annual event organised and supported by the Ministry of Defence (MoD) of the Russian Federation. The 7th edition of this Forum titled ‘Forum Army 2021’was held from 22-28 Aug 2021 at the Patriot Square and other locations in and around Moscow.1

As always, at the bottom of the Forum was the ‘business case’ wherein, while the host eyed opportunities for multiple contracts (some 45 arms contracts were envisaged worth some 7 Bn USD), the international exhibitors (1316 exhibitors from 15 countries) tried to woo old and new customers to their freshly-minted/old-proven products for new/repeat orders. The media and industry got an update of ‘what was brewing in the defence and aerospace technology domain.

This article takes a brief look at some of the new systems/technologies on display by Russia and more importantly, what are the takeaways/implications of the same for us.

Stealing the limelight at the air pavilion was the all new export version of the Russian Fifth Generation Fighter Aircraft (FGFA) Su-57E. It will be recalled that this machine, in its earlier version, was unveiled for the first time at International Aviation and Space Show in Moscow in Mar 2019.2

The main point being projected for the new Su-57E (being put up as Perspective Multi role Fighter or PMF) was its tangible cost advantage vis-s-a-vis US FGFAs (F-35, F-22 etc.). The comparative tables on display attempted to convince the visitors that the machine had all the works on board – stealth, super-cruise, precise thrust vector control, adequate power on board,internal weapon bays and more ( technical details of features not explained).

Some Points for us

When India pulled out of the Russian FGFA programme in Jul 2018, there were performance sub-optimality issues besides other reasons (work share, time and cost overruns etc.). Our analysis had found the following main performance deficits at that time in Su-57E FGFA3:–

While the Russians are now claiming that all the earlier performance blues stand addressed (higher thrust engine than the previous Saturn AL-41 F1S or Izdeliye 117, better thrust-to-weight ratio, better stealth features, mating with hypersonic missile etc.) it is for the prospective buyers to check it out. On our part we have to ensure that our very own FGFA, the Advanced Medium Combat Aircraft or AMCA does not suffer from any of the performance deficit which made us leave the FGFA programme in the first place. Big things have been promised in AMCA – all-aspect stealth, swing-role capability, fifth generation technologies to start with and provision to accept sixth generation capability upgrades, superior EW suit, internal weapon bays, full-pack armament suit etc. The HAL must walk the talk on its claimed capabilities.

Another big apprehension with AMCA is that it must not go the Tejas way with time and cost overruns running into decades and billions of dollars (sic). The first flight of AMCA is scheduled in 2025. HAL and ARDE must come good on this time frame. The not so encouraging news is that AMCA is behind schedule even as of now. HAL must catch upon time and cost.

Another interesting machine on display was the rotary wing UAS Bas 200. It will be recalled that this machine was first showcased in Jul 2021 during the International Aviation and Space Salon, MAKS 2021.

Currently most of the drone inventory world over is either quad/hexa-rotor for small drones and generally fixed wing for bigger machines. While China has reportedly developed helicopter swarm drones, mainframe rotary wing UAS in general are still comparatively lesser in number still date. To that end, it was something new at display.

Another interesting thing was that while Bas has a maximum take-off weight (MTOW) 200 kg, Russia plans to build this vertical to reach an MTOW of a whopping one ton. That indeed will be a niche development. OEM is Russian Helicopters Holdings.

It was reported way back in 2017 that that Russia’s Ruselectronics Group is developing advanced reconnaissance systems (named Penicillin) that can detect enemy artillery gun position within 5 seconds of the shot6. The system is fully automated for the process of detection and adjusting own counter fire on the target. It uses both acoustic, as well as, thermal sensors. The vehicles were to go into production from 2019, post development.

It appears that this development has been completed as Forum 2021 exhibited a fully operational Automated Penicillin Reconnaissance system. The significance of this relatively new development is its extremely short time of response. It also will obviate the sub-optimality and risk associated with manual adjustment of artillery fire.

Learning through multiple combat situations in Syria where the Russians suffered the first ever swarm drone attack at their air base at Khmeimim and naval facility at Tartus, on 05th Jan 20187 and later in the live battlefields of Nogorno-Kabarakh, Russians have come a long way in developing counter UAS (c-UAS) systems in the niche technology domain.

Some of these were at display first at iDEX 2021, and later, at Forum 2021. The emphasis was on soft-killing of UAS through the EW /RF route by electronically crippling the control/communication/navigation links of the drones or developing low-cost kill options using modified small arms (SA) or high-firing air defence guns. Some interesting displays included the following.8,9,10

Modified air defence guns with high rate of fire such as ZU-23-2 were also at display as counter-drone weapons in the kinetic kill domain.

The significance of seeing this weapon array is to realise which way the world is going in fielding all sorts of low-cost/EW kill/RF kill c-UAS arsenal. Also it is important to note, that we also have ZU 23-2 guns in large numbers. These must be put to effective use in counter-drone warfare. For this, the said guns will require to be upgraded. This project which is now hanging fire for 8 years must commence post haste. As regards soft-kill options, our Defence Research and Development Organisation (DRDO) and private industry need to go a long way ahead in this. The requirement is to move forward of just R&D and realise the products for operational use.

On this concept, there were at display two Russian counter stealth radars (also called counter very low-observable or CVLO systems). Some points:-

One of the special features of Forum Army 2021 was a Robotics competition. An entire pavilion was dedicated to the technologies for the control of UAS and robotics systems. There were combat and reconnaissance robots, robots designed for clearing the mines, robots for operating in the hazardous/contaminated areas etc. The controlling technologies embraced such niche areas as artificial intelligence, IT and ITes, virtual reality, augmented reality, 3D dynamic display and data transmission technologies etc.

On the UAS side, the emphasis was on showing a higher and higher degree of autonomy of the unmanned platforms to operate with minimal/nil connect with the ground control station and how the UAS can be used as a force- multiplier in joint missions with combat platforms in Manned and Unmanned Teaming (MUMT) operations.12

We are into our baby-steps in robotics and just about entering the domain of MUMT related autonomous operations. A brief glimpse:–

Coming to the Indian pavilion one could feel a breadth of some fresh air upon realisation that some old mind-sets were finally being shed. This is further explained:–

It was nice to hear the Director of Public Interface (DPI) DRDO at the forum 2021 when he stated – ‘defence exports from India have a huge potential to grow further’5. It is a heartening to realise that the Govt’s attitude towards boosting defence exports is looking up.

That the Private industry will match the pace and go beyond is the hope of the author.

That was a brief round-up of Forum 2021 and some takeaways from it. The feel-good is that we are also there – arrived somewhere; reaching somewhere.