From time to time there is a furor over receipt of donations from abroad. In December 2013 the Supreme Court gave the Central Bureau of Investigation a further period of eight weeks to report on the actual of NGO’s in the country.

FCRA regulates the receipt of funds by NGOs and is managed by the MHA.

Does the Government know the total amount of money received under the Foreign Contribution Regulation Act (FCRA)? How does GOI ensure that recipient organizations are working in national interest?

First, a bit about the regulatory framework for NGOs who receive foreign funds?

FCRA regulates the receipt of funds by NGOs and is managed by the MHA. Any organization that wants to receive contributions from abroad has to apply and get approval from the Home Ministry. The associations could be religious, social, educational, cultural or educational organizations.

If an NGO, whether registered or not, receives a contribution in excess of Rs 1 cr during a period of 30 days, the Bank has to report this to the Central Government within 30 days of the date of such last transaction. The NGO has to annually submit audited accounts to MHA who scrutinize the returns to ensure that contributions received for a particular purpose are used for that purpose only. It does a detailed check of randomly picked associations and collates the data received to present the FCRA Annual Report.

Reported receipts by NGOs between 1993-94 to 2011-12 were Rs 1,16,073 crs. Only about 55% NGOs gave audited accounts so amounts received by them are included in this report. Actual receipts were much higher. 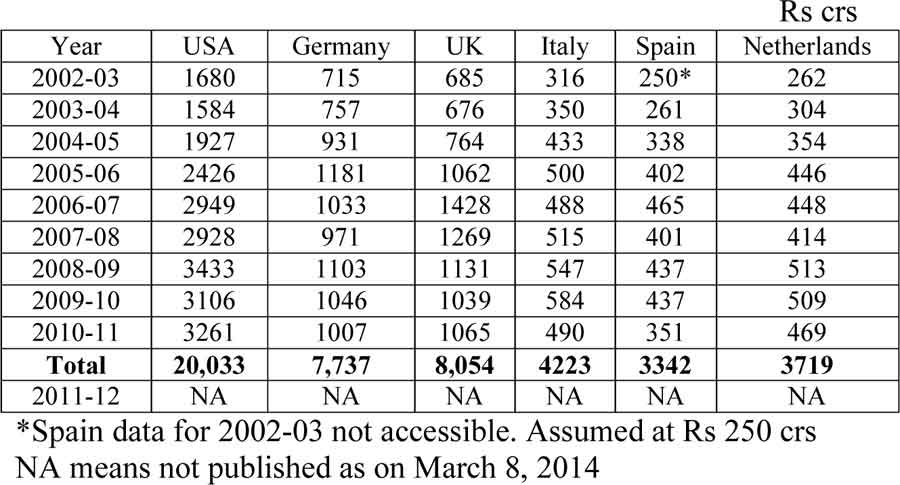 Rs 20k crs by the U.S. and nearly Rs 8k crs by Germany/UK are large sums of money. Why are these countries remitting large sums of money? May be U.K. donates to help overcome the guilt of looting India during colonial rule or to continue with the colonial construct of the Indian Mind.

The economies of the U.S. and Europe, barring Germany perhaps, are under stress. Should not donors spend money on their own citizens!

Ironically receipts from Middle East countries were only app Rs 155 crs in 2010-11 even though media reports indicate funds come through hawala.

According to this report in Rediff.com there are atleast 40 charitable organizations in Saudi Arabia whose primary job is to raise money for funding terror in India. The links to Saudi Arabia became extremely clear when the police tracked a hawala transaction of $10,000 (about Rs 4,60,000) which was used to carry out the July 11, 2006 serial train blasts in Mumbai that killed 209 people.” To read more http://www.rediff.com/news/special/howterror- funds-are-pumped-in-from-saudi/20110811.htm

It is also possible that funds are routed through migrant working class who work in the Gulf.

Are such large contributions only for social work, a smokescreen for the Church to fund conversions to India/promote divisiveness tendencies in the country or create a population of believers with strong emotional bonding and dependence on the West’! As a popular TV anchors says ‘The nation would like to know’.

Yogi Sikand, a high profile activist, who spent years fighting for the so called oppressed – Dalits, minorities and women wrote an article titled ‘Why I gave up Social Activism’. The piece gave insights into how NGOs use the lure of money; foreign conferences etc, to accentuate if not create divisions in Indian society. To read more http://www.countercurrents.org/sikand190412.htm 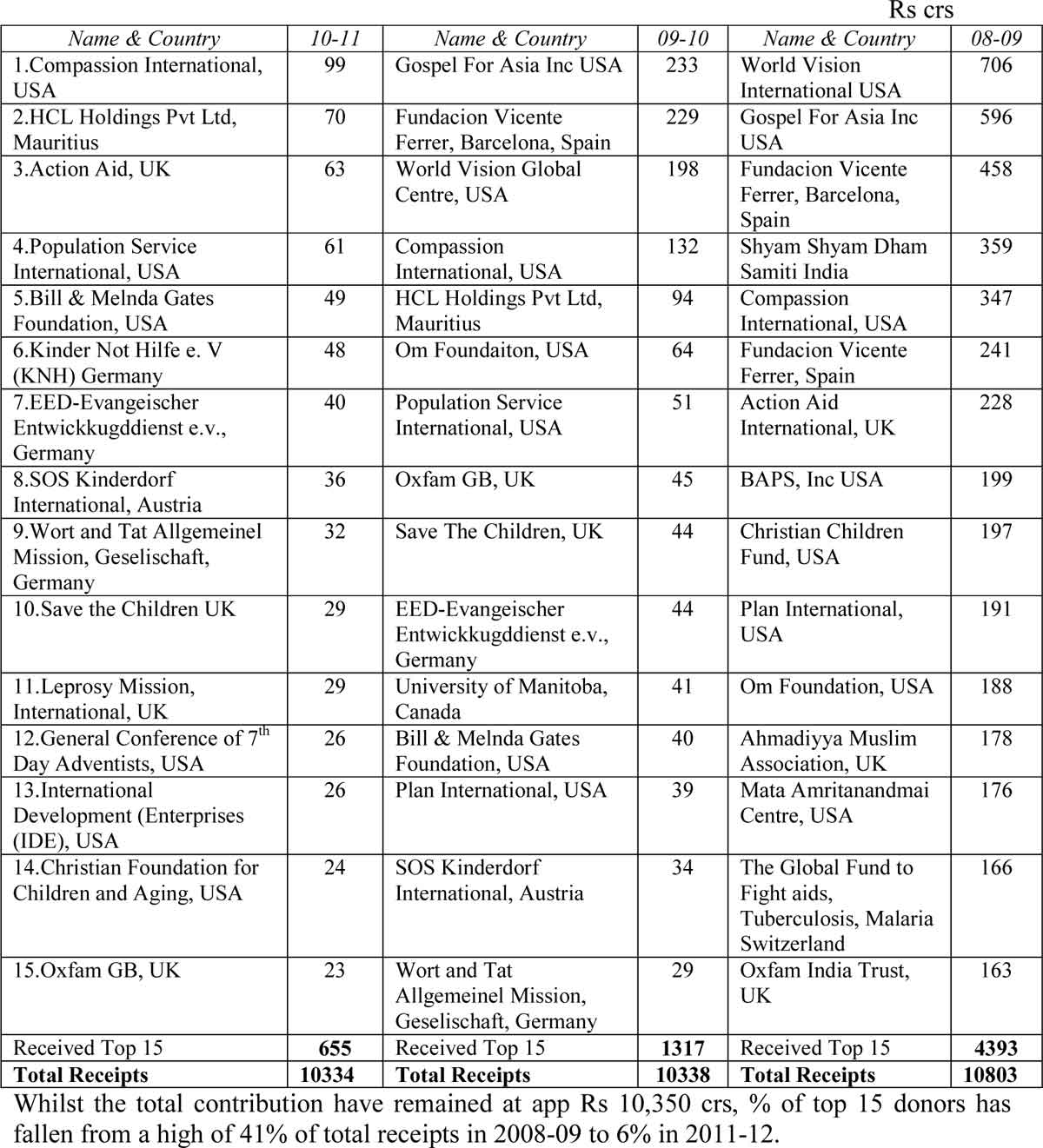 This could mean that big donors have stopped giving or are doing so through different donor entities. Since total contributions from the big three i.e. U.S., Germany and U.K. are around the same levels it must be the latter.

Another e.g. is Gospel for Asia a Texas based Christian missionary organization. In 2009-10 it made contribution of Rs 233 crs but does not feature in top 15 donors list in 2010-11. Perhaps, wanted to get off the MHA radar after the furor created by the “2008 Kerala Home minister statement that the ‘Church has bought nearly 2,800 acres of land, including a 2200 acre rubber estate” excerpts from Breaking India by R Malhotra and Aravindan Neelakandan.

As per site of World Vision, largest donor in 2008-09 Rs 706 crs, their Mission is “World Vision is an international partnership of Christians whose mission is to follow our Lord and Saviour Jesus Christ in working with the poor and oppressed to promote human transformation, seek justice and bear witness to the good news of the Kingdom of God.” To read more http://www.wvi.org/vision-and-values-0