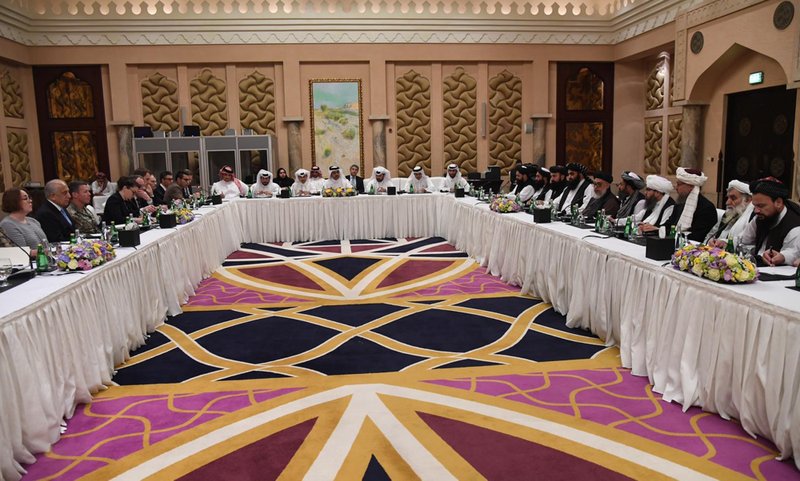 The US-Taliban peace deal is spluttering with the intra-Afghan dialogue stalemated before it began. The political scene has a touch of hilarity with Ashraf Ghani taking oath as President for a second tenure simultaneous to erstwhile CEO Abdulla Abdullah also taking oath as President the same day. Post signing of the US-Taliban deal on February 29, Ghani had refused freeing 5000 Taliban fighters in and Taliban releasing 1000 Afghan National Defence Security Forces (ANDSF) as prelude to Intra-Afghan talks at Oslo on March 10.

President Ghani’s offer of prisoner swap of 1500 Taliban fighters and equal number of ANDSF has been refused by Taliban. There are also unconfirmed reports that in addition to the US-Taliban deal, US also signed a deal with the Afghan government because of which Ghani would have to release 5000 Taliban fighters. Much that this latter deal sounds absurd, nothing is surprising any more with text of the US-Taliban agreement, which mentions Islamic Emirate of Afghanistan (read Taliban), which has never been  recognized by US as a state.

On March 7, Taliban issued a statement that reads, “As this 19-year jihad (holy war) against the (foreign) occupation was waged under the command of a legal Emir (Taliban chief Mullah Haibatullah Akhundzada), the termination of occupation agreement does not mean that his rule is absolved”. US media later reported of Washington having received convincing evidence that Taliban had made the deal with the US to achieve withdrawal of US forces and when completed they would attack the Afghan government.

Queried by a reporter on March 6,whether the Taliban will overrun the Afghan government after US forces leave, President Donald Trump responded on March 6 saying, “It’s not supposed to happen that way, but it possibly will.” But was Trump aware that the deal actually signed was between the US and the Islamic Emirate of Afghanistan. And, if he was privy to this, how did he expect Taliban to keep violence levels low for next few months when they actually they would like to butcher every US soldier in Afghanistan? Did Trump’s advisors take him for a ride?

It was hardly befitting the US President to personally call up Mullah Abdul Ghani Baradar amidst extraordinarily large number of heightened Taliban attacks, though not on US troops. Did Trump really expect Taliban to cool off?  The deal was already signed and it was Haibatullah Akhundzada and his deputy Sirajuddin Haqqani who were behind the multiple attacks on ANDSF posts (43 to be explicit) on the very first night post the 7-day ‘reduced violence’ period. The US did launch a drone attack to ease off Taliban attacking ANDSF in a particularly area, but terming it ‘defensive’ was show of weakness to Taliban.

Washington’s policy towards Afghanistan has been erratic. A strategic blunder was made in 2001 by allowing a weak division-sized force of Pakistan Taliban-Haqqanis mixed with regular Pakistani army personnel to be airlifted to Pakistan from Kundus and Khost while the US invasion of Afghanistan was underway. Taliban-Haqqani terror camps inside Pakistan were not attacked. Moreover, between surge and thin out of US troops in Afghanistan Taliban could consolidate in regions like Helmand. America’s soft corner for Pakistan continued despite latter’s support to Taliban-Haqqanis.

Trump had told a reporter on March 6, “We can’t be there for the next — another 20 years”, explaining that the Afghan government needs to start protecting itself and expressed hope that Afghans were capable of defending themselves over the long term. That amounted to admission that the ANDSF would be in a precarious condition without US support. General Frank McKenzie, Commander US CENTCOM told the House Armed Service Committee (HASC) on March 10 that US has not developed military plans for complete withdrawal in 14 months but he has plans to cut the number by summer.

McKenzie told HASC he has no confidence Taliban will honor its commitments but his projections are irrelevant because decisions will be based on facts and ground situation. However, US military’s spokesman for Middle East has confirmed American troops have begun their withdrawal in line with its “conditions-based reduction of forces to 8,600 over 135 days.” Taliban obviously would enhance its hold/influence over more territory. US Defence Secretary Mark Esper believes the US-Taliban deal is holding up, despite a few instances of violence, some of which is being committed by the Islamic State group’s Afghanistan affiliate, as stated by a Pentagon spokesman.

Esper’s view about ‘few instances of violence, some of which is being committed by the Islamic State group’s Afghanistan affiliate’ appears to be about the terror attack in Kabul on March 6 killing 35 and wounding 58 on a congregation attended by CEO Abdullah Abdullah who escaped unhurt. No doubt the IS claimed responsibility but there are numerous instances of IS and Al Qaeda operating in conjunction and helping each other. Haqqanis are very much Al Qaeda and Al Qaeda chief Ayman al-Zawahiri had announced full support to Taliban just few years back.

It appears that US would pressure Ghani to release some Taliban fighters if not all 5000 under the US-Taliban deal. The intra-Afghan talks will likely remain in flux but Trump will in all probability reduce US troop presence to 8,600 by July. This would help Trump’s political agenda – demonstrating his resolve to ‘bring the boys home’. Taliban’s aims are crystal clear and violence levels are unlikely to abate. Full US withdrawal may depend on Trump’s advisors who may palm off Taliban attacks as by IS and convince Trump that Taliban   will abide by the deal of not letting Afghan territory to be used for attacking US or its allies.

There is little doubt that re-establishment of Islamic Emirate of Afghanistan would be highly detrimental to US interests at the strategic level. Trump’s political promises apart, a complete pullout at this stage would be akin to Bill Clinton justifying his affair in the Oval because of anxiety. Combat capacity of the Afghan National Army needs to be strengthened and contract of soldiers increased from 5 to 10 years, which the Afghans have been wanting since very long. Most importantly, flow of terror and support must be stopped from Pakistan to Afghanistan through a UN or multinational force before US pulls out.

One thought on “Forcing the US-Taliban Deal”