The present regime in Beijing is really allergic to democracy.

Though since ancient times democracy has been recognized as the best way to get the ‘masses’ to participate to the governance of a village, a town, a county or a nation, the Communist never liked it; they say it is a “Western invention’. 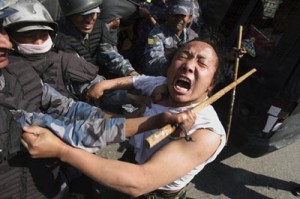 Historically, it is not even true, India knew about democracy before Ancient Greece. It is said Suddhodana, Gautam Buddha’s father was an elected raja and thousands of small republics flourished at that time in the subcontinent.

To come back to Nepal, on February 13 elections of a new Tibetan Kalon Tripa (Prime Minister) was organized for the Tibetan refugees everywhere in the world. It was supposed to be held in Kathmandu too.

Elections were held in the past in Nepal, but this time the Nepali police were ordered by the Chinese to “˜forcefully shut down these local elections.

Elections were held in the past in Nepal, but this time the Nepali police were ordered by the Chinese to ‘forcefully shut down these local elections’.

Radio Free Asia reported: “The seizure of the ballot box from the Boudha district, one of three areas where voting was held and raided by the police, came four months after Nepali armed police blocked thousands of Tibetan exiles in Kathmandu from voting for a new government-in-exile. They forcibly confiscated the ballot boxes after storming into three voting centers in the capital, home to almost 9,000 Tibetan exiles, as the elections were held.”

Interestingly, the local police at first did not object to the voting. But after it had been underway for one hour, riot police arrived and they arrested voters present; they were taken away for detention.

Why this sudden change of mind? One can easily guess.

German MEP Thomas Mann: “Nepal must not give in to pressure from Beijing and must allow the 20,000 Tibetans in the country to exercise their right to vote for their government in exile.”

Ironically, Maria Otero, the US Under Secretary of State for Democracy and Global Affairs, who is also the Special Coordinator for Tibetan issues in the Obama’s Administration was in town that day; she had visited the Tibetan Refugee Transit Center in Kathmandu and met Nepali government and UN officials.

Though Otero pledged the US continued support for the safety and welfare of Tibetan refugees in Nepal, saying that she would carry their message back to Washington, the Chinese did not seem to care much for what the Americans ‘feel’.

Ditto for the Europeans. On April 7, the European Parliament passed a resolution condemning the ‘ban’ of the Tibetan elections in Nepal.

German MEP Thomas Mann who is the Chairman of the European Parliament’s cross-party Intergroup on Tibet declared: “Freedom of speech and the right to vote are universal human rights. Nepal must not give in to pressure from Beijing and must allow the 20,000 Tibetans in the country to exercise their right to vote for their government in exile”. 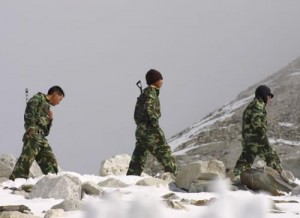 The Resolution calls on the Nepalese authorities to “refrain from preventive arrests and restrictions on demonstrations and freedom of speech” of the Tibetan community in Nepal and urges Kathmandu to include these basic rights as well as the freedom of religion in the country’s new constitution, due to be enacted by 28 May 2011.

But Beijing is less bothered by the EU Resolutions.

Practically, right now there is only one article in the new Nepali Constitution, “Follow the orders from Beijing”.

It was clear when Chen Bingde, the Chief of General Staff of the PLA and member of the Central Military Commission visited Nepal on March 23.

Chhatra Man Singh Gurung, Chen Bingde’s Nepali counterpart kowtowed, welcoming the visit of Chen Bingde, he said: “for years, the bilateral relations of China and Nepal enjoyed smooth development and the military exchanges in various fields were constantly strengthened. The Nepalese side thanks the Chinese side for its equal treatment and sincere assistance, and is pleased about China’s peaceful development and prosperity. The Nepalese side is willing to make joint efforts with the Chinese side to further deepen friendly relations between the two militaries.”

On his own, Gurung reiterated “the Nepalese government will firmly support the one-China policy and is committed to crack down on the Tibetan separatists in Nepal. It will not allow any person to engage in the activities of splitting China in Nepal.”

The Chinese general did not even have to pronounce the ‘T’ world, Gurung did it for him.

Chen Bingde had just to affirm: “the Sino-Nepalese friendship had withstood the tests of changes of international situation and changes of respective countries, thus it became the common wealth of the two peoples. In recent years, the relations between the two militaries have achieved gratifying results, which played an important and positive role in promoting the comprehensive development of bilateral relations and ensuring security and social stability of respective countries.”

According to a communiqué issued in Nepal: “During the meeting, officials of the two nations agreed to coordinate each other on security affairs.”

The Chief of the Tatopani Immigration Office, Bijaya Poudel, told the press that the Nepali officials agreed to curb the anti-Chinese activities in Nepal and deport the Tibetan arrestees to the Chinese officials.

Now, you may think that the Chinese are really tough with the Nepalese, forcing them to suppress or arrest Tibetans refugees, but it is not what Beijing feels: their ambassador, Qiu Guohong has been recalled because he has been ‘too weak’.