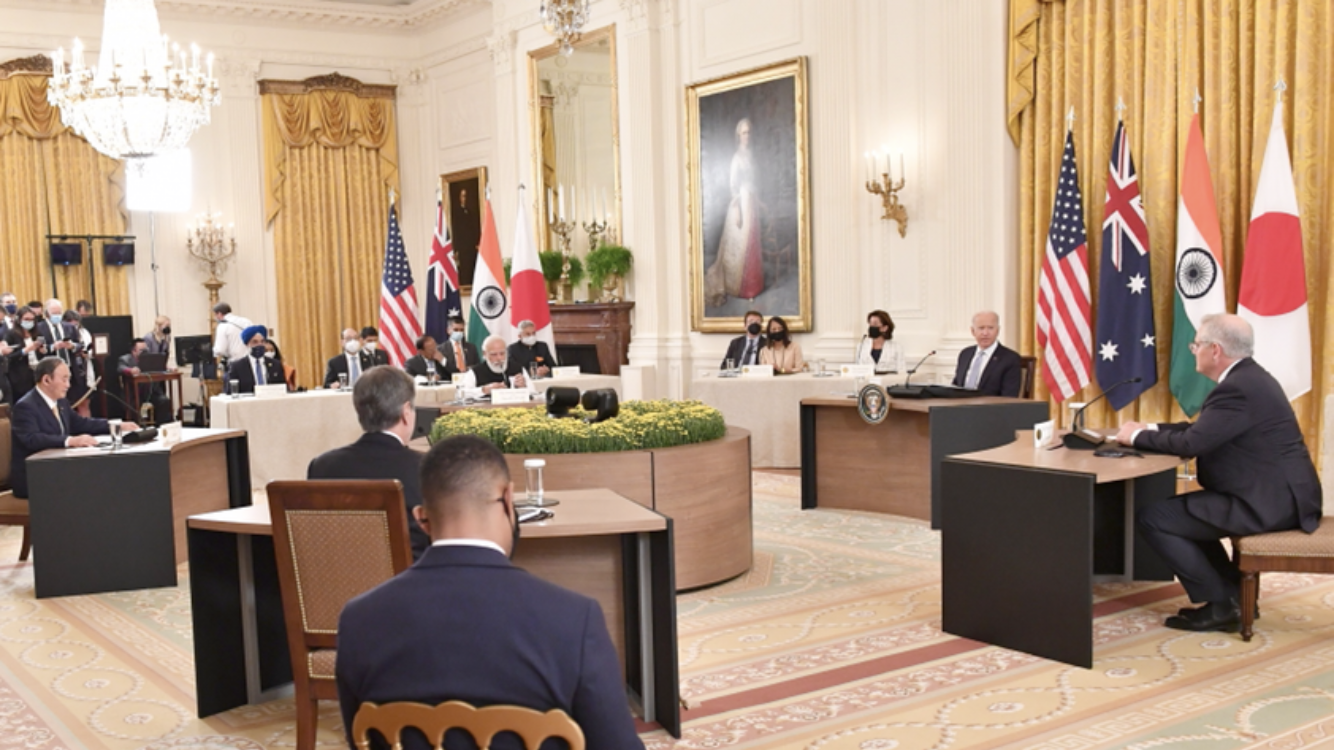 The in-person summit was held in backdrop of Taliban takeover of Afghanistan, the US–UK–Australia trilateral security partnership ‘AUKUS’ announced on September 15 under which Australia is to get six nuclear-powered submarines, and increasing Chinese military activities in Western Pacific including China’s new maritime rules.

At the summit on September 24, the leaders asked the Taliban to respect human rights and ensure Afghanistan’s territory is not used by terror organizations, urged North Korea to refrain from provocations and Myanmar to restore democracy. Important takeaways of the summit are as under:

• Free and Open Indo-Pacific. Quad had come up in face of China’s aggressive behaviour. The summit reaffirmed Quad’s commitment to a free, open, inclusive and resilient Indo-Pacific conforming to ASEAN’s outlook and centrality. Willingness to work together and with a range of partners in the region. EU Strategy for Cooperation in the Indo-Pacific was welcomed– but America will need extraordinary effort to undo damage caused to US-EU relations through the sudden announcement of AUKUS.

• Combating COVID-19. With the Quad Vaccine Experts Group as the core of Vaccine Partnership, at least one billion doses of COVID-19 vaccines will be produced by end 2022. India’s move to resume exports of COVID-19 vaccines beginning October was welcomed. Australia and Japan to continue assisting Quad initiatives through COVID-19 Crisis Response Emergency Support Loan, grant-in-aid and financial allocations. Joint pandemic-preparedness tabletop/ exercise to be conducted in 2022. Continue strengtheningand supporting life-saving work of international organizations and partnerships.

The importance of India in the Quad is unquestionable  given its strategic location in the Indian Ocean while  Australia, Japan and the US are in the Pacific. The above takeaways are equally applicable to India, the added advantage being that India will be producing one billion COVID-19 American vaccines by end 2022, which implies investments and goodwill –  ‘world’s pharmacy’ as has been propagated by Prime Minister Narendra Modi. India must also leverage its advantage and use the opportunity to become Aatmanirbhar in manufacturing semiconductors.

The issue, however, to note is that amid all the cooperation for free and open Indo-Pacific, COVID-19, science and technology, climate and infrastructure, India is the only Quad member that shares a 3,488 km border with a belligerent China. Now AUKUS has opened the floodgates for SSN technology. US deliberately ignored China’s nuclear proliferation to Pakistan. What stops China from providing SSNs to Pakistan and Iran? Would that not get the US into a real bind?

America has said that SSN technology would not be provided to India and Japan but it is no secret that visiting US and UK vessels to Japan since decades have been carrying nuclear armsnotwithstanding vehement denials by both. Japan anyway is under America’s defence umbrella, which leaves India out. So why should India not acquire state-of-the-art SSN technology from France and Russia?

When the US terms India as an important partner, why the hesitation in sharing technology; bit–by–bit in miserly fashion? For example, India has been looking for latest engine technology in the aerospace sector, which America could have easily shared. Now witness the technological bonanza that the US has accorded to China by abandoning 3 x C-130 aircraft, 23 x light attack aircraft, 33 x AC-208 aircraft, 43 x MD-530 helicopters, 33 x UH Blackhawk helicopters and 32 x Mi-17 helicopters in Afghanistan. These will be reverse engineered by China and shared with its partners and protégés.

As for counterterrorism and Afghan territory not to be used for terrorism, America can cut out the glib talk after consigning Afghanistan to a Taliban government that has 14 UN-designated terrorist in its cabinet, has taken the women back to stone age and is back to public executions-cum-hangings. Moreover, if the US is actually serious about counterterrorism, it should have given up its love affair with Pakistan after what has happened in Afghanistan but continues with its so-called “constructive engagement”.

Ahead of the first in-person Quad Leaders Summit, Foreign Secretary Harsh Shringla stated on September 21 that AUKUS has no link with the Quad and will have no impact on the functioning of the latter. This may well be a simplistic diplomatic statement considering that both USand Australia are part of AUKUS and Quad and the very basis of these two groupings is the aggressive rise of China. Interestingly, China has lost no time in initiating countermeasures.

With AUKUS announced on September 15, China filed an application on September 16 to join the Comprehensive & Progressive Agreement for Trans-Pacific Partnership (CPTPP) an economic agreement of 11 countries including Australia and Japan. China’s economic clout and the interplay of CPTPP with the economies of Australia and UK would need to be watched. Post BREXIT, UK is already struggling with its economy; seeking trade pact with the US, India and other countries. Recall that in 2017, the Donald Trump administration had pulled out from the Trans-Pacific Partnership (TPP).

Finally, it is reiterated that the US-UK rift with EU-France on account of AUKUS must be addressed as this works to China’s advantage. Also, merely stating willingness to work together and with a range of partners in the Indo-Pacific region is not enough. Efforts must be made for expansion of the Quad to Quad Plus. This would bring pressureon China, causing it to stop sniggering about building ‘small circles and groupings’.