The aircraft, designated TI3, is the third of three test aircraft that will complete a 600 hour integrated flight test programme. This first flight comes just a few weeks after the second AW159, designated TI2, first flew in mid October. All the three aircraft flew together for the first time on the same day. 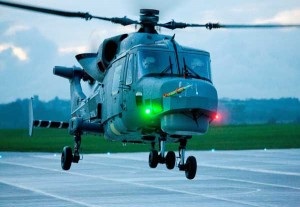 Graham Cole, Managing Director, AgustaWestland, said after the flight “I am delighted that the final test aircraft has performed its maiden flight completing on time a critical part of the AW159 development. This programme will deliver unprecedented levels of capability and cost/effectiveness to the services once the operational readiness is achieved.”

The first flight of the third AW159, known as Lynx Wildcat in UK military service, marks another major milestone in the development of this new six-ton multi-role military helicopter, 62 of which have been ordered by the UK Ministry of Defence. The first aircraft will be delivered at the end of 2011 with the aircraft becoming fully operational with the Army in 2014 and the Royal Navy in 2015. The British Army’s AW159 Lynx Wildcat will perform a wide range of tasks on the battlefield including reconnaissance, command and control, transportation of troops and materiel, and the provision of force protection.

The Royal Navy variant will provide an agile maritime capability providing anti-surface warfare capability and force protection and will operate in support of amphibious operations and be an important element in defending ships against surface threats. There will be a high degree of commonality between the Army and Royal Navy helicopters that will mean that an aircraft can switch roles easily, principally through the changing of role equipment.

The AW159 programme for the UK MoD continues to be on time and on budget and was the first major project to be awarded under the Strategic Partnering Arrangement signed by the UK Ministry of Defence and AgustaWestland in June 2006. AgustaWestland has also signed partnering agreements with a number of key suppliers on the AW159 programme including Selex Galileo, a Finmeccanica company; GKN Aerospace, LHTEC – a partnership between Rolls-Royce and Honeywell, General Dynamics UK, Thales UK and GE Aviation.