Fifty Years Since Haji Pir: Where did we go wrong? 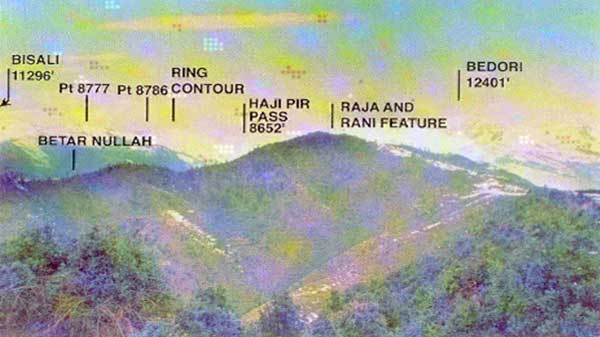 50 years have gone by since the capture of Haji Pir Pass by India and its return to Pakistan under the Tashkent Agreement. Where did we go wrong? We have had Parliament resolutions that Kashmir is an integral part of India, and rightfully so because the entire State of Jammu and Kashmir was acceded to India by the then ruler, Maharaja Hari Singh through an Instrument of Accession signed on October 26, 1947, post massive Pakistani infiltration. The CFL had been drawn under the 1949 Karachi Agreement under aegis of the UN Commission. It was Pakistan (not India) that breached the Cease Fire Line (CFL) through massive infiltrations by her Gibraltar Force and ‘Op Grand Slam’.

At a height of 2,637 metres, the Haji Pir Pass is located on the Western fringe of the formidable Pir Panjal Range that divides the Srinagar valley from the Jammu region. It is through this Pass that a wide, metalled highway connected Srinagar to Jammu via Uri-Poonch–Rajouri, over which bulk of passenger and trade traffic used to ply. This road is of strategic importance as it connects Uri with Poonch; but since a major portion of road is in Pakistan Occupied Kashmir (POK), it cannot be used by India. In the event of a conventional war with Pakistan, Haji Pir would be a vital objective for India because it is through this Pass that trained Pakistani militants have been sneaking into the Kashmir Valley, Poonch and Rajouri districts. Also, this Pass cuts into Indian-held territory by severing the Poonch-Uri route and can provide access to much of POK.

The Poonch Valley link road connecting Jammu with Poonch Valley was a hot favourite military objective of military planners in Pakistan, right from 1947-1948. Pakistan captured 78,114 square kilometres of area in Kashmir in 1947-1948 through a mix of regular troops and mujahideen post independence, and this territory called POK, remained with Pakistan because Pandit Nehru halted the Indian Army pursuing the fleeing Pakistanis through a unilateral ceasefire and approaching the UN. Buoyed by this success, the idea of launching a guerrilla war in Jammu and Kashmir was in vogue in Pakistan since the 1950s as admitted by A.O Mitha, a former Pakistani General, who had raised the Special Services Group (SSG) though he had been advising the hierarchy that such operations had no chance of success.

It was Foreign Minister Zulfiqar Ali Bhutto who convinced Ayub Khan that Pakistan was in a position to dislodge the Indians from Kashmir and once trained Pakistani soldiers went inside Kashmir, the people of the Valley would spontaneously rise in revolt while fear of China would prevent India from provoking an all out war. Bhutto did not have to cajole Ayub much because the latter had his own vision of a grandiose victory based on the pusillanimous performance of India in not getting POK vacated from Pakistani aggression post partition. While approving Operation Gibraltar, Ayub wrote, “As a general rule, Hindu morale would not stand more than a couple of blows delivered at the right time and place. Such opportunities should, therefore, be sought and exploited.”

Success of capturing POK apart, Ayub was primed by Chinese Premier Chou-en-Lai who while visiting Pakistan in the early 1960s advised Ayub that, “Pakistan should prepare for prolonged conflict with India instead of short-term wars. He advised Pakistan to raise a Militia Force to act behind enemy (India) lines.” So, Ayub used a minor skirmish in the Rann of Kutch area in May 1965 to launch Operation Gibraltar. According to a Pakistani military scholar, the Gibraltar Force, established in first week of August 1965, consisted of a number of guerrilla groups of roughly a battalion strength including Kashmiri volunteers trained by the Pakistan Army, SSG and some regular infantry troops, some 5,000 to 7,000 strong.

Wikipedia puts the strength between 26,000 and 30,000. The forces had five sub-divisions, each with nucleus of regulars, with specified area targets – Srinagar Valley, Mendhar-Rajauri area, Dras-Kargil area, Nowshera-Sundarbani area and Bandipura-Sonarwain area. The Kashmir Valley task force was further subdivided to target specified areas of Qazinag-Naugam, Tithwal-Tangdhar, Gurais and Kel-Minimarg. The mission assigned to the various Gibraltar forces was warfare in the enemy’s rear including harassing communications, destruction of bridges, logistic installation and headquarters with a view to create conditions of an armed insurrection in Kashmir finally leading to a national uprising against Indian rule – much akin to what Chou-en-Lai had advised Ayub Khan who in turn believed that his Gibraltar Force would capture Jammu and Kashmir for keeps.

In conjunction and as follow up to launch of the Gibraltar Force, Ayub wanted Number 12 Division to capture Akhnoor. This objective was chosen because it had a single Class 18 bridge on the fast flowing River Chenab which was the key to Indian communications from Jammu and a group of valleys lying South of the Pir Panjal Range and West of River Chenab, most prominent of which was the Poonch Valley. The bridge was the sole all-weather lifeline of an Indian infantry division, with some twenty infantry battalions defending Poonch, Rajauri, Jhangar and Nauhshera and one independent Infantry Brigade defending the Chhamb-Dewa Sector. Possession of Akhnoor could enable Pakistan to threaten Jammu; the key to all Indian communications from Pathankot to Srinagar/Ladakh. The offensive to capture Akhnoor was assigned the codename ‘Operation Grand Slam’.

India had realised that Pakistani infiltrating groups were a serious threat to the security of Jammu and Kashmir and that the only way to deal with the threat was to plug their infiltration routes and destroy their sanctuaries across the Cease-Fire Line (CFL) even as Pakistani forces moved a large concentration of their guns close to the CFL and began shelling Indian positions near Tithwal, Uri and Poonch. So, Indian troops sallied forth to capture two important posts in the Tithwal Sector advancing up to the Kishanganga River, Point Pt 13620 in Kargil Sector, Rishmar Ridge in Tithwal Sector and moved onwards to the Pir Sahiba feature from where they could see more of POK and dominate infiltration routes. Next, was the capture of Sunjoi feature on the outskirts of Mirpur and this was retained despite two counter attacks. Next was the capture of Ring Contour overlooking the Mirpur Bridge, which the retreating Pakistanis destroyed. This was followed by the capture of Haji Pir Pass and then Point 9013 in Tithwal Sector, which gave our troops complete domination of the Mirpur area right up to the bridge at Jura on River Kishenganga thus cutting off the routes for further infiltration into the Gurez Valley and Tithwal Sector.

All communication between the infiltrators in Uri-Poonch area passed through the Haji Pir Pass. The Pass was dominated by three neighbouring hill features; on the East by Bedori (3,760 metres), on the West by Sank (2,895 metres) and Ledwali Gali (3,140 metres) to the South-West. It was considered essential to seize these posts before proceeding to the Haji Pir Pass (2,673 metres). Bedori was situated 14 km South East of the CFL and Haji Pir Pass is some ten kilometres South West of Bedori.

Being an important lifeline for the Pakistani infiltrators-cum-saboteurs, it was considered vital to capture the Haji Pir Pass. Considering the lie of the ground, it was apparent that capture of the Haji Pir Pass involved large-scale pincer movement for quick capture of the dominating features without giving time to the enemy to regroup and bring in reinforcements, finally converging to capture the Haji Pir Pass itself. The pincer movement required one thrust along the general axis Uri-Haji Pir Pass, in combination with a second thrust from the South via the Poonch-Kahuta approach.

Being an important lifeline for the Pakistani infiltrators-cum-saboteurs, it was considered vital to capture the Haji Pir Pass…

It was appreciated that the link-up between these forces would cut off all routes of approach into the crucial area of the Haji Pir Bulge. The responsibility for the thrust from the North (along general axis Uri-Haji Pir Pass) was given to 19 Infantry Division and 68 Infantry Brigade under Brigadier (later Lieutenant General) Z.C Bakshi, Commander, 68 Infantry Brigade, was tasked for this operation codenamed ‘Operation Bakshi’. The responsibility for the combination pincer along general axis Poonch-Kahuta approach from the South, to link up at Haji Pir Pass, was given to 25 Infantry Division with 93 Infantry Brigade in the operation codenamed ‘Operation Faulad’.

This operation was planned as a two-pronged simultaneous attack against an enemy holding well-fortified defences adding up to some three and a half battalions. The left prong was to advance along Uri-Sank-Ledwali Gali-Haji Pir Pass while the right prong advanced along Uri-Bedori-Kuthnar Di Gali-Kiran-Haji Pir Pass.

The capture of objectives was planned by August 25, 1965, followed by mopping up of the area. The time schedule of the plan, however, had to be modified due to heavy rains. Also, in preparation for the operation and to facilitate forward dumping of artillery and infantry ammunition and other war-like stores, the formation’s engineers were also constructing motorable tracks for one-tonne trucks up to Solikot reasonably close to Haji Pir and a 21-metre Bailey bridge across a torrential river under conditions of darkness and in heavy rain.

8 thoughts on “Fifty Years Since Haji Pir: Where did we go wrong?”