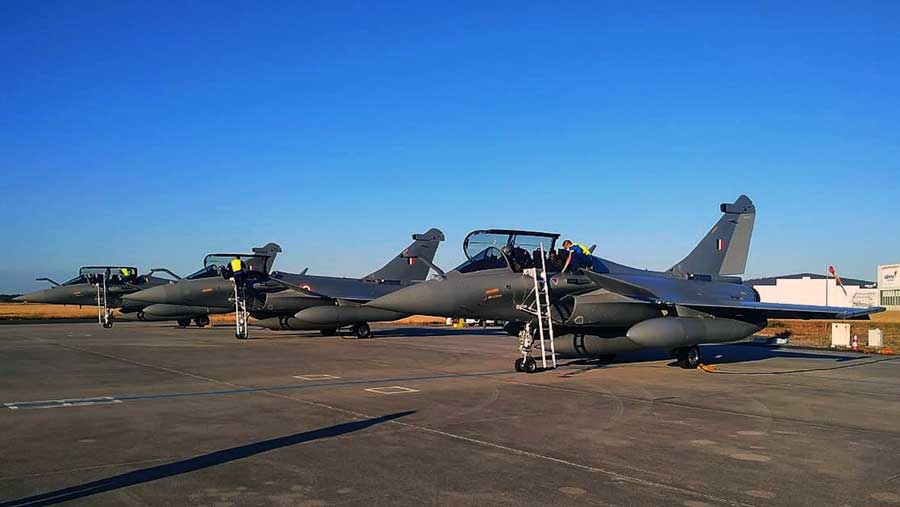 The aircraft are likely to arrive at Air Force Station, Ambala, on 29 Jul 20 subject to weather. No 17 Squadron, the “Golden Arrows”, is being raised at this base equipped with Rafale aircraft.

Together with His Excellency Shri Jawed Ashraf, Ambassador of the Republic of India in France, Eric Trappier, Dassault Aviation Chairman and Chief Executive Officer, congratulated the Indian Air Force team present in France since almost 3 years, for successful management of the program.
He also complimented the trainees who joined for more than a year on their outstanding ability to master the aircraft.

The whole attendance then saluted the departure of the Rafale.

“I am strongly impressed by the amazing efficiency and determination of the Indian Air Force and Indian Ministry of Defense, despite this unprecedented world health crisis, to master rapidly all aspects of the Rafale for comforting Indian sovereignty and contributing to the protection and security of Indian people, stated Eric Trappier. This new milestone illustrates once again the exemplary cooperation between Dassault Aviation and the Indian Air Force, started in 1953, and reasserts our total commitment to fulfill Indian Air Force requirements for the decades to come, and to be part of India’s ambitious vision for the future”.

One thought on “Ferry of Rafale”