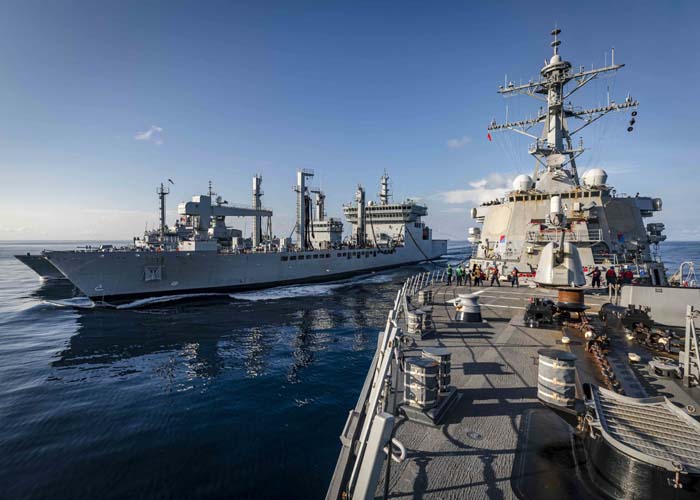 The Eurasian Times of 17 January reported de-classification of a US highly confidential ten-page report prepared by Assistant Secretary Robert C O’ Brian which, among other things, highlights the importance of India in the US’ Strategic Framework for the Indo-Pacific as the Trump Administration’s overarching strategic guidance for implementing the President’s 2017 National Security Strategy (NSS) within the world’s most populous and economically dynamic region.

The report mentions the “Offer of support to India –- through diplomatic military, and intelligence channels –- to help address continental challenges such as the border dispute with China and access to water, including the Brahmaputra and other rivers facing diversion to China.”  It says the US could extend support to “India’s Act East’ policy and its aspiration to be a leading global power, and its compatibility with the U.S, Japanese, and Australian vision of a free and open Indo-Specific”.

On its page 5, the report defines its objective to “accelerate India’s rise and capacity to serve as a net provider of security and Major Defence Partners; solidity and enduring strategic partnership with India underpinned by a strong Indian military able to effectively collaborate with the United States and our partners in the region to address shared interests”.

Experts on regional strategies describe Indo-Pacific cooperation, both the Indo-US strategic partnership and the Quad, as a response to the Chinese behaviour of disregarding many established international norms of bilateral and multilateral relations.

In its Volume 38, No 1 of Spring 2018, the Institute of Strategic Studies, Islamabad observed: “China’s rising military power and the Trump administration’s decision to withdraw from the Trans-Pacific Partnership (TPP) has further contributed in increasing regional anxieties. It is to be noted that the US’ emphasis on India’s role within the Asia Pacific is a consequence of consistencies in the US strategic priorities that value India as a regional counterweight to China’s growing influence while also preserving the US dominance within the region.  Indo-US relations have progressed from President Obama to President Trump despite the vastly different styles of leadership and the overarching pattern of the Indo-US strategic relations has not changed in any significant way. India will continue to play a central role in the US security strategy for the Asia Pacific and the benefits accrued will, in turn, contribute towards the expansion of its geopolitical influence within the region”.

On 27 October 2020, US Secretary of State Mike Pompeo and Secretary of Defence Mark Esper signed the Basic Exchange and Cooperation Agreement (BECA) in New Delhi during the session of 2+2 dialogue. This, along with two more agreements completed a ‘troika of fundamental pacts’ between India and the US “for deep military cooperation” wrote the Indian Express of November  3, 2020.

After the implosion of the Soviet Union, Prime Minister Narasimha Rao had dropped hints at President Clinton about the restructuring of bilateral relations. Clinton not only brushed its away but also brought pressure on India to dismantle her nuclear structure.

By 2001, the two countries had agreed to a hazy idea of interlocking of militaries. The US then had offered the “Major non-NATO” status to India also which New Delhi spurned not wanting to be equated with Pakistan. In 2003 Vajpayee turned down US request of sending a division of Indian troops to safeguard Kurdish zone in Iraq following the defeat of Saddam. Our relations with the US then were on the downslide.

A broad appraisal of Indo-Pacific realities revealed that given the “vigorous Xi-Putin alliance” and China’s weaponry input and logistic upgrading over the years, the US or India may not be able to secure Indo – Pacific region on their own. India’s manpower is a big asset in streamlining the security strategy but the narrative is of improving defence capabilities comprehensively to meet the threats posed by the eastern adversary.

Prime Minister Modi found it advisable that the two countries signed the BECA for bringing the troika pact to its completion before the presidential election in the United States.  In the words of Nalapat, he was aware of “GHQ proxies’ influence in Biden camp and how difficult it was for any administration to untangle the two interlocking DNA strands”. For Modi, the BECA agreement was central to the security of India. Credit should also go to Trump who recognized the exceptionality of India in the Indo-Pacific security.

Finally, in October 2020, the troika pact was completed with the signing of the BECA, which not only gave a new direction to Indo-US relations but also opened a new chapter, perhaps a maiden chapter, for activating the doable parts of the fundamental pacts. What do the fundamental pacts signify is the crux of this expose and here we shall try to explain it. LEMOA, COMCASA and BECA comprise the troika of fundamental pacts that have to be explained succinctly.

Logistics Exchange Memorandum of Agreement (LEMOA) is the first of the three agreements signed by the two countries in August 2016. It allows the militaries of the two countries to replenish militaries from each other’s bases and access supplies, spare parts and services from each other’s land facilities, airbases and ports which can then be reimbursed. The agreement is particularly useful to the Indian – US Navy-to-Navy cooperation. It is something like stopping at a friend’s garage or workshop to refuel your car or to repair it when you are far away from your home or workshop. Mutual trust is a critical element of this agreement.  It took almost a decade to build trust and sign the LEMOA. India was already providing some facilities to the US envisaged in the agreement but LEMOA institutionalised it.

After the 2+2 dialogue between India and the US was successfully concluded COMCASA (Communications Compatibility and Security Agreement) was signed in 2018. It allows the US to provide India with its encrypted communications equipment and system so that Indian and the US military commanders, aircraft and ships can communicate through secure networks during peace or war. It is like exchanging messages on WhatsApp, signal or telegram in a real-time and insecure manner. Equipment would be transferred to India to facilitate interoperability.

Basic Exchange and Cooperative Agreement (BECA) will help India get real-time access to American geospatial intelligence that will enhance the accuracy of automated systems and weapons like missiles and armed drones. Through the sharing of information on maps and satellite images, it will help India access topographical and aeronautical data, and advanced products that will aid in navigation and targeting.

This could be a key to Air Force-to-Air Force cooperation between India and the US. BECA will provide Indian military systems with a high-quality GPS to navigate missiles with real-time intelligence to precisely target the adversary. Besides the sailing of ships, flying off aircraft, fighting of wars, and location of targets, geospatial intelligence is also critical to the response to natural disasters.

The signing of BECA flows from the commitment in the joint statement during President Donald Trump’s visit to India in February last year, when the two sides said they looked forward to an “early conclusion” of BECA.

The specific context of the pact

The pact is meant to strengthen the mechanism to be seen in the context of increasingly aggressive China threatening neighbours and challenging several established norms of international relations.

In the background of a standoff along LAC in Ladakh, India and the US intensified under-the-radar intelligence and military cooperation at an unprecedented level since June last.  In the third week of June, Security Adviser Ajit Doval, CDS General Rawat and Defence Minister Rajnath Singh were in regular communication with their counterparts in the US. It facilitated conversation and information sharing between security, military and intelligence agencies including sharing of high-end satellite images, telephone intercepts and data on Chinese troops and weapons deployment.

In his speech on the occasion of signing BECA, Pompeo attacked China and reiterated US’ commitment “to stand with the people of India to confront threats to their sovereignty and liberty.” Defence Secretary Esper said, “Based on our shared values and common interests we stand shoulder to shoulder in support of a free and open Indo – Pacific for all, particularly in the light of increasing aggression and destabilizing activities of China”.

A pertinent and serious question which may be asked is what can be the fallout of India-US embrace over Indo-Pacific strategy? To be precise, Indo-Pacific is a joint programme and the Quad is the overarching security arrangement in the Indian Ocean and the region eastward. Of course, American interests are both global as well as national. The US would welcome if India moves away from the Russian military equipment and platforms. India’s purchase deal with Russia for S-400 air defence missiles system is a sticking point for the American interlocutors. But India is wary of Pakistan’s deep-rooted relations with the Pentagon and Washington’s dependence on GHQ for access to Afghanistan as all the exit strategy. The strategic embrace between India and the US stems from China’s overt and covert threat to India and South East Asian states, physical, material and diplomatic. The Indian defence establishment has already used five American platforms in the course of the standoff on the LAC. These are C 17 Globemaster III for military transport, Boeing Chinook CH.47 as heavy-lift helicopters, Boeing’s Apache as tank killers, P-81 Poseidon for overland reconnaissance and Lockheed Martin’s e-130 J for airlifting troops. Alongside this part of defence cooperation, let us not forget the Aircraft carriers from the US and India accompanied Australian and Japanese warships in the Indian Ocean during Exercise Malabar in November 2020.

Abetting border intrusions, laying claim to vast tracts of land along the Sino –Indian border, rejecting the Durand Line, threatening to divert the course of outflow of rivers like the Brahmaputra, obstructing India’s seat in the Security Council and openly supporting Pakistan–based terrorists conducting clandestine terrorist operations in India are all vital manifestations of China’s hostility towards India. New Delhi has been trying all possible methods for resolving bilateral disputes through a sincere dialogue but Beijing believes in arm twisting exercise. Keeping in mind China’s penchant for the aggressive and arbitrary type of conducting bilateral relations, India, a strong and responsible democracy in the Asian Continent, deserves three cheers for opting in favour of a policy of self-reliance (atmnirbharta)  in all walks of life particularly in defence production and innovation. The Indo-Pacific strategic engagement gives her a good opportunity of moving fast and strong towards the policy of self-reliance. If Chinese pressure along Himalayan border is to be reduced, India must accelerate her presence, felt or perceived, under the umbrella of Indo-Pacific strategic framework.