Only three weeks after the order agreement between the Norwegian Army and Krauss-Maffei Wegmann (KMW) on October 29th this year, the first ten of 20 DINGO 2 heavily armoured vehicles have been delivered to a delegation of the Norwegian Armed Forces in Munich (Germany) under the lead of Major General Trond R. Karlsen, the head of the Norwegian Procurement Agency NDLO. The vehicles are now on their way to Afghanistan, where KMW service personnel will make them operational for theatre. Parallel to the production of the vehicles Norwegian soldiers were trained by KMW in maintaining and operating the DINGO 2. 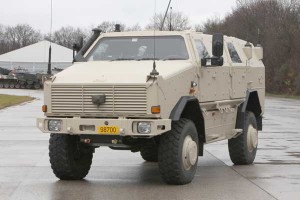 Thus KMW demonstrates once again its ability for quick and reliable delivery and its worldknown contribution to the protection of soldiers on the ground. “We are proud to work with such a remarkably professional and challenging customer as the Norwegian Army. They have selected the best protected vehicle in its class and we delivered them express in record time” says Frank Haun, CEO and President of KMW.

The DINGO 2 will be deployed as a patrol and protection vehicle. KMW also supports the Norvegian Forces with on-site service teams in Afghanistan to cover tasks such as maintenance, repairs as well as training of the crews. The DINGO 2 is the safest and best-protected wheeled vehicle in its class with an outstanding performance on difficult terrains and under extreme climatic conditions. With over 700 vehicles delivered in different configurations, the DINGO is a trusted mission partner by six different European nations.