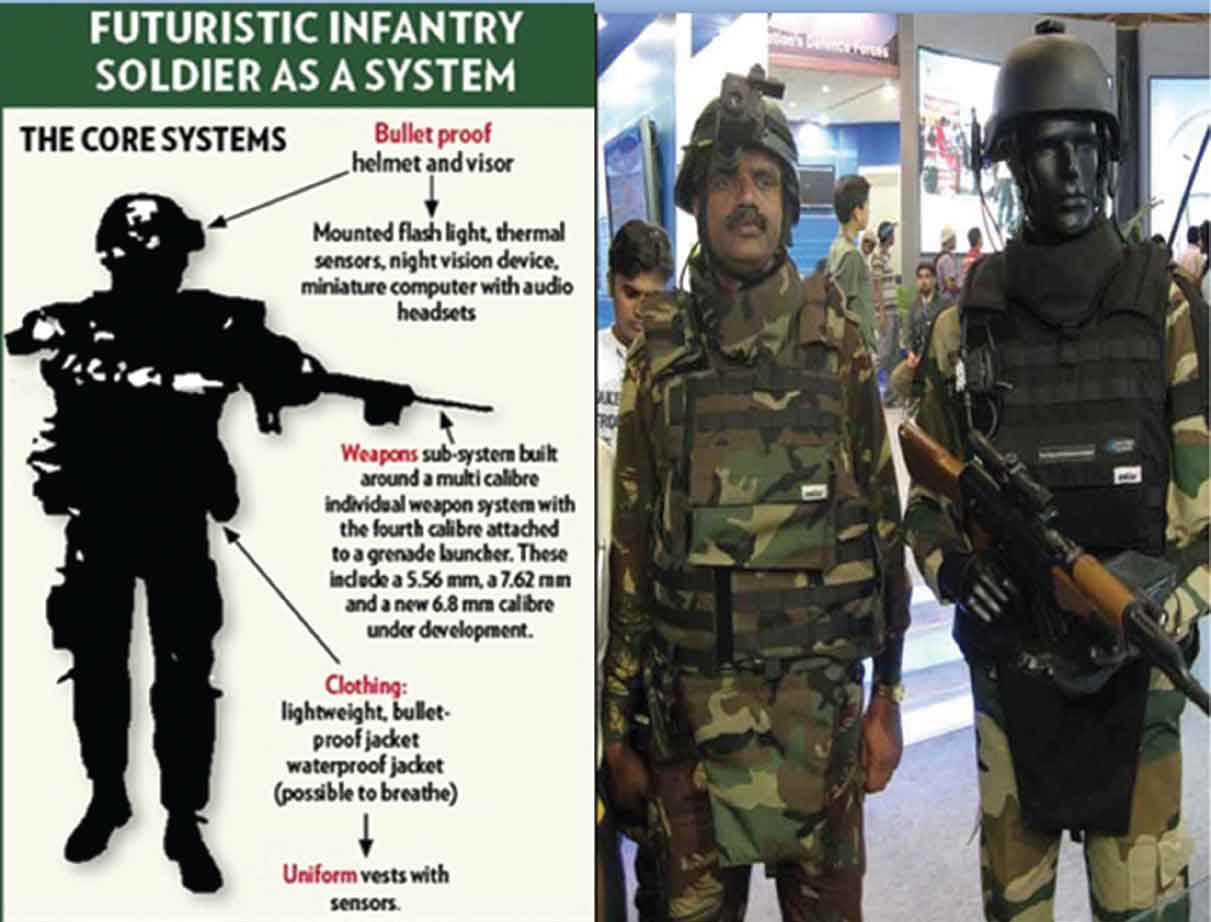 The future of the F-INSAS today is at the crossroads where the Weapons Sub-System and Body Armour and Individual Equipment Sub-System have made tangible progress and gradually, the basic weapons and BPJs, Ballistic Helmets along with other accessories over a horizon of two to five years would find their way in to Infantry Battalions. But the same may not be true for its Night Enabled Operations capability and its ability to operate seamlessly in a net-centric operational scenario; which is still a distant reality. The progress of Project F-INSAS is being carefully monitored by most advanced armies and it needs to be pursued by the Indian Army as an integrated, not piecemeal, effort.

The basic concept behind all Infantry Soldiers Modernisation Programmes (SMPs) in the modern and evolving armies is that the Infantry soldier continues to be the focal point in all operational scenarios under varying terrain conditions. Infantry mission spectrum is wide and complex; that warrant enhanced capabilities, to sustain him in high tempo mobile operations, in difficult unfamiliar terrain conditions and while he operates in urban areas under extreme climatic conditions and ever present asymmetric threats.

The most significant of the Solider Modernisation Programmes are the Land Warrior of USA, IdZ-ES of Germany, FIST of UK and FELIN of France. At this juncture, most of these programmes are still in nascent stages of implementation and only some of them are in the stage of advanced planning of design and implementation.

Pursuance of the Soldier Modernisation Programmes by global armies is necessitated as the modern battlefields are becoming more and more diverse, multi-dimensional, highly lethal, characterised by high tempo of operations that are transparent and net-centric. All this happens against the backdrop of ever increasing threat of the looming asymmetric warfare. While operating under these complexities a soldier definitely needs to be empowered with emerging technologies.

All seemed poised for rapid development, at least in some countries but the process and the pace of modernisation was an arduous one. Some of the main reasons that retarded this process are the need to wait for the advent of certain technological breakthroughs and the usual financial constraints combined with the more recent emergence of the so-called ‘urgent operational requirements’ for contingents deployed in various theatres of operation slowed down many of those programmes.

Contrasting approaches have been adopted in pursuing these programmes; while most the Europeans have selected one leading agency responsible for integration, but the others, especially the United States, left this task to the military. Various SMPs have reached different levels of maturity taking different developmental routes. Indeed, some involve full integration of all the sub systems that have been developed from the ground up, while others chose a more conservative approach, contemplating integration of existing or the legacy equipment. Most of them, however, agree with the necessity of integrating dismounted soldier through vehicle platforms to the overall architecture of Command and Control.

All “Soldier Modernisation Programmes” seek to empower the dismounted soldier with every conceivable piece of electro-optical situational-awareness enhancing kits along with the much required lethality, sustainability and ever needed protection.

Conceived in April 2005 as part of the Infantry Vision 2020, the Indian Army’s Future Infantry Soldier as a System (F-INSAS) aims to harness the advanced cutting edge military technologies that would enhance the operational capabilities of the Infantry soldier and enable him to operate across the entire spectrum of conﬂict. The F-INSAS perceives a multi-mission, multi-role war fighter who is part of the system that contains numerous modular integrated sub-systems.

The future Infantryman will be provided with effective sensor-shooter interface…

Objectives of the F-INSAS Programme

The concept focuses on the need to provide infantry soldier with enhanced capabilities in terms of lethality, survivability, sustainability, mobility, communications and situational awareness. The future Infantryman will be provided with effective sensor-shooter interface; each soldier is integrated with his Section, Platoon and Company. Needless to say, the entire soldier system would be user friendly, not only with regard to what is delivered but how each component is used in conjunction with other components. 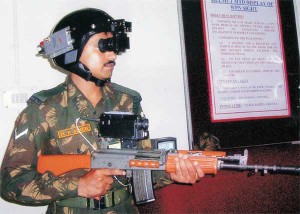 Project F-INSAS has conceptualized sub-systems that are in various stages of fructification:-

Robust, highly reliable, modular and simple weapon systems to include CQB Carbine, Multi-Calibre Assault Rifle and LMG. The weapons would to required modular, scalable with capability to take on various attachments like UBGL and the latest generation of weapon sights.

Today, the troops engaged in Low Intensity Conflict are without a Close Combat Weapon…

Going by the current trends, the earliest the Infantry can receive the first lot CQB Carbines maybe some time in 2017…

CQB Carbine: The Indian Army’s authorisation of the number of carbines is approximately 3,85,000 which is divided into CQB Carbines and the Protective Carbines. The CQB Carbines, mainly for the frontline troops are authorised approximately 1,68,000 and Protective Carbines – about 2,17,000. The five versions of good old Carbine Machine 9 mm were rendered obsolete more than ten years ago. Today, the troops engaged in Low Intensity Conflict are without a Close Combat Weapon. Despite the operational void of a critical weapon for close combat battle, the global tender for CQB Carbines issued in December 2010 is yet to see the light of day.

Approximately 45,000, CQB Carbines and its ammunition along with Reflex/Holographic Sights and Visible and Invisible Laser Spot Designators are under procurement at an estimated outlay of Rs 4,000 crore; the procurement is with ToT of the CQB Carbine and ammunition being purchased. Leading global arms manufacturers are vying with each other and despite the fact trials going on for almost three years. No decision is forthcoming on the outcome of the trials. It is learnt that all types of trials have been concluded more than six months back but the Army HQ has not been able to complete the last stage of the trials namely the General Staff Evaluation.

There could be many impediments that are delaying the GS Evaluation but procrastination is not going to offer any solutions. The Infantry Soldier deserves a CQB Carbine without any further delay. It is safe to assume that going by the current trends, the earliest the Infantry can receive the first lot CQB Carbines maybe some time in 2017 and the indigenous production by OFB will not commence before 2020. The CQB Carbine would therefore not be complete without Night Sight which is still a distant reality.

Multi-Caliber Assault Rifle: The failure of the INSAS Rifle 7.62 mm has been highlighted in many fora. The Indian Army views it as an operational necessity to have an Assault Rifle that would enable its soldiers to combat the menace of counter insurgency operations as well as have an Assault Rifle for conventional roles. This has led to the concept of an ambi-dextrous Assault Rifle that was Multi Caliber – 5.56 X 45 mm & 7.62X39 mm, firing NATO SS-109 and 7.63X39mm ammunition, with modular inter-changeable parts in the field without usage of tools with facility to mount breach loaded UBGL. The Assault Rifle is being procured along with Reflex/Holographic Sights, Telescopic Sight, Visible Laser Pointer and the UBGL. The weight of the Rifle less optical sights and bayonet will not be more than 3.6 kg and the UBGL will not weigh more than 1.5 kg.

Former Deputy Director General in the Infantry Directorate.   Brig BS Chauhan, SM; is from Kumaon Regt and hails from the District Pithoragarh (Uttrakahnd). The Officer has extensively travelled in this region as he has served in Kumaon Scouts, in his individual capacity he undertakes treks in the region frequently. As a Child he has lived here and travelled up to Lipulekh with his Uncle) who was in charge of construction of Bridle path: Kalapani-Lipulekh.)

One thought on “F-Insas Programme: Future Infantry Soldier As A System – A Reality Check”