Efforts are underway to acquire two new frigates from UK.

Two OPVs are being built at Shanghai Naval Dockyard in China ordered through China State Shipbuilding Corporation. Four more OPVs are to be ordered in 2008.

One training ship for the Royal Thai Navy is being built at Shanghai Naval Dockyard China. More training ships are to be ordered.

Request for Proposals (RFPs) for light corvettes are likely to be issued in 2008. It is expected that 8 to 12 such ships will be built. Preliminary presentations are already being made by DCN France, BAE Systems UK, VT Shipbuilding UK, Navantia Spain, Northrop Grumman Avondale, General Dynamics, Bath Iron Works.

New class of light frigate (Project Yas) for the UAE Naval Forces is being conceived. Abu Dhabi Shipbuilding (ADSB) may be the prime contractor for this programme.

Oman has recently placed order for three corvettes for the Oman Navy on VT Shipbuilding at a cost of GBP 400 million. These corvettes are expected to be completed in 2011. 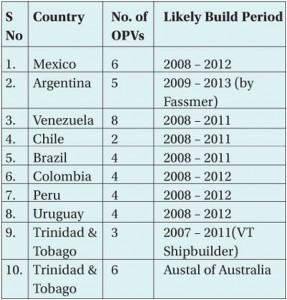 Latin American OPV programme consists of 37 OPVs to be built during 2008 to 2012 in given in table:-

Royal Moroccan Navy has given Schelde Naval Shipbuilding of DAMEN Shipyards the order for the design and delivery of three SIGMA (ship integrated geometrical modularity approach) multi-mission frigates. The ships will be delivered by 2012. The SIGMA multi-mission frigates will be an extended version of SIGMA corvettes by adding one or two modules.

Six to eight Arctic/OPVs at estimated cost of C $ 3.1 billion are likely to be ordered. These ships need to be designed and built ab nitio. Consideration is being given to base the design on Norweign “Svalbard Class.”

Analysis of the International Export Market in the Naval Sector

The majority of the international export market in warship building pertains to light frigates, corvettes and OPVs.

Frigates are sophisticated and expensive platforms and represent the smallest surface combatant that can conduct extended blue water missions in a high threat environment. Frigates can range between 2,000-6,000 tonnes. These are designed for one specific role i.e. anti-submarine, anti-air warfare or multi-role design (general purpose).

Corvettes are well-armed ships with displacement ranging from 600-2,000 tonnes. They are best suited for regional operations and are generally not intended for ocean-going operations. Corvettes are probably the smallest platforms capable of accommodating the sensors, weapons, and combat systems needed to operate in a medium threat environment, including the littorals. The origin of the corvette can be traced down to World War I, when, in order to counter the German U boat menace in littoral waters, the British developed special ‘escort type’ corvettes. Also, in the convoy warfare of the World War II corvettes were used.

OPVs were developed for Navies and/ or Coast Guard missions. An OPV is capable of patrolling the waters of an Exclusive Economic Zone for an extended length of time. By virtue of its mission, an OPV needs to be relatively large (generally over 700 tonnes) to possess the necessary range and sea-keeping characteristics needed for extended offshore patrols. The OPV is often built to commercial standards and is slower (around 20 knots) than corvettes or light frigates. An OPV is generally lightly armed but can carry SSMs and ASW equipment in war time. Some OPVs are built to naval standards with growth margins for weapon upgrades. For smaller navies, the OPVs are main stay of their inventory. Even for larger navies, less costly OPVs may be essential in the future for economical extensions of coverage. The OPV has to span the gap between ‘coast guard’ and naval tasks.

International Players in the Business of Export of Warships

The international players who are presently successful in capturing the market for light frigates, corvettes and OPVs in the regions under consideration have been identified as follows : –

In addition to the above, the following players are also seeking export business for warships in the regions under reference : –

All the above players project their own designs and adapt their designs to suit the customer requirements.

Although India has lagged behind in commercial shipbuilding, yet warship building and associated ancilliary industry in India has flourished and nurtured by the Navy to achieve self-reliance through indigenisation. Our shipyards have delivered destroyers, frigates, corvettes, OPVs, FACs, hydrographic ships, which are operating successfully with the Navy.

Although India has lagged behind in commercial shipbuilding, yet warship building and associated ancillary industry in India has flourished and nurtured by the Navy to achieve self-reliance through indigenisation. Our shipyards have delivered destroyers, frigates, corvettes, OPVs, FACs, hydrographic ships, which are operating successfully with the Navy.

India has sufficient strength to meet the ‘international export potential’ in naval sector in regions where the market has been identified. India can meet the requirements of the ‘international export market’ at more economical terms. This view needs to be projected and presented to the concerned so that they can benefit from economical warship building for light frigates, corvettes and OPVs.

Getting The Act Together

The market available is known. The products to be exported i.e. OPVs, corvettes, light frigates, the associated systems,and machinery and equipment which goes on board these ships are also known. Which are the possible agencies to be involved in ‘international export in naval sector’? Firstly, the MOD and the Navy of the host country, to give confidence and assurance to the customer regarding the nation’s backing. Secondly, the ‘design bureau’ and the shipyard which could meet the customer’s requirements with regard to design, and build these ships at economical terms. Thirdly, the ancilliary industry that could supply the systems These may be from indigenous or foreign sources. Fourthly, the weapon payload which could be partly indigenous and partly from foreign sources. In the latter case, tripartite government to government agreement may be necessary.