Evolution of the Indian Submarine Arm

India had wanted an Oberon or Porpoise class submarine from the Admiralty, however, the latter was prepared to offer only obsolescent ‘A’ class submarines of Second World War vintage. The decision on the acquisition of Russian submarines thus marked an end of an era for the Indian Navy in several ways8.

The proposal to establish a submarine arm continued to be in a state of limbo, ostensibly owing to lack of finances, but it suddenly acquired urgency with the arrival of the new frigates with anti-submarine capability, mainly because it had been reported in 1958 that a neighbouring country was considering the acquisition of submarines for its navy.

Admiral Chatterji states “A paper was submitted to the Government in 1959 for the acquisition of three operational submarines which would also naturally be available as target submarines for the anti-submarine ships. Protracted discussions took place with the Government at various levels over years without much progress”9.

The Navy found it extremely difficult to carry conviction, either in India or in Britain, that the Submarine Arm was a priority requirement.

The proposal stated that to start with flotilla of at least four submarines, technical logistic support in terms of docking facilities, battery and periscope repairs and maintenance and refitting would be provided by the Naval Dockyard at Bombay. The other facilities required would be a shore base or a depot ship with machine shops, torpedo preparation shops, electrical workshop and spare gear storage, a fully equipped training establishment for both operational and technical training10. It was also proposed to requisition the services of foreign submarines experts in an advisory capacity for the planning and establishment of the submarine arm, as the Indian Navy at that time did not have personnel with adequate submarine experience.11

Since submarine used diverse tactics to get into a favorable position to fire torpedoes, and to avoid detection by anti-submarine ships, the tactics involved change of depth, speed and course or the use of decoy devices or a combination of two or more of these; it was realized that only officers with submarine experience, born of service in submarines, would know what tactics a submarine likely to adopt under a given set of circumstances. Since the training imparted at the Navy’s Torpedo and Anti-submarine School and Tactical School at Cochin was based on theoretical knowledge, practical knowledge acquired through service in submarines was considered of utmost importance. For this purpose, the Navy proposed the establishment of a submarine-trained cadre of 38 officers and 65 sailors to be trained over a period of four years, the first batch of four officers and twelve sailors being proposed to be trained at the Royal Navy’s submarine school in 1961 for a period of one year.

Several attempts were made to acquire submarine capabilities. They were hindered by a shortage of funds, particularly after the 1962 aggression, and then reluctance on the part of the UK and the USA to equip India with submarines of the requisite class. India had failed to obtain any submarines from the UK, then turned to the USSR in 1965 and thus the flow of ships, equipment, weapons from UK and technical expertise from the British Admiralty to the Indian Navy, ended and India began to explore other sources for state of the art naval hardware. 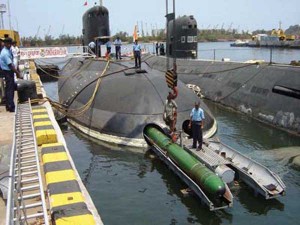 After the military reverses in the border war with China in October 1962, a major defence review was initiated to remedy the inadequacies. This gave the Navy the opportunity to resubmit its case for the acquisition of submarines.12 In addition to the arguments used earlier, it was emphasised that China possessed submarines, some of which had sufficient range to operate in the Bay of Bengal. The Navy therefore needed to acquire submarines, not only for the earlier reasons, but also for employment in the Hunter-Killer role against Chinese submarines.

The new proposal put up in November 1962 asked for three submarines. The justification given was that to keep one submarine continuously on patrol in an area about 1500 miles from India, such as the Malacca Straits, three submarines would be required: one would be undergoing repairs or refit or resting the crew, the second in transit to and from the patrol area and the third actually on patrol.

Vice Admiral BS Soman (former Chief of the Naval Staff in 1963) says, “A serious bone of contention with the Government was the acquisition of submarines. I was convinced that these were crucial for a balanced force, but Prime Minister Nehru and Admiral Mountbatten thought otherwise. After a lot of discussion, I was allowed to raise the matter with the Admiralty when I went to Britain in 1963. As expected, they turned it down – it was clear that the British would only sell us vessels which conformed to their Commonwealth Indian Ocean Defence Plan. This was not acceptable to the Navy and I recommended that we look elsewhere, suggesting that Russia might be a likely substitute. We found the Russians not only ready to sell, but to accept part of the payment in rupees. Thus it came about that the Russians got our custom and remained our major and reliable suppliers over the years.”13

In 1965, a combination of events precipitated India’s decision to acquire the ships and submarines that Russia had offered in 1964, the acceptance of which had been kept pending. The Navy too had been different, and reluctant, to sever its connection with the Royal Navy and wanted to await Britain’s final decision regarding financial assistance for constructing in Britain an Oberon class submarine identical to those being built for the Royal Navy. The Oberon design was the latest at that time. In September 1965, an accord was signed by India and Russia for the acquisition of four submarines, a submarine depot ship, five Petya class submarine chasers, two Landing Ship Tanks and five patrol boats. 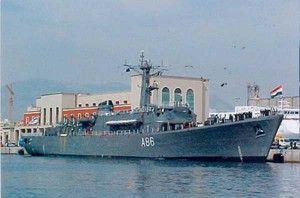 It came from what was then a non-traditional source – the Soviet Union. In fact it was the purchase of submarines that marked the beginning of a long and fruitful co-operation with the nation in the naval sphere. On 08 Dec 67, the ‘F’ class submarine INS Kalvari was commissioned. She was followed in the next few years by Karanj, Khanderi and Kursura. Then came the ‘mother ship’, a submarine support vessel called Amba. The unit was virtually complete with the arrival of a submarine rescue ship, INS Nistar in 1972.

INS Amba, a submarine depot ship, was commissioned in 1968. Submarines, due to their inherent space limitations have to depend upon a mother or depot ship for essential supplies and certain basic facilities. These include the charging of submarine batteries, provision of high pressure compressed air, dedicated workshop facilities and accommodation for submarine crew.