Apart from other roles, insurgencies in Malaya, Kenya, Zimbabwe, French Indo-China and Algeria saw helicopters being used for troop induction into and extraction from combat zones, rudimentary fire support to ground forces and surveillance. Most operations were confined to daytime and in relatively clear weather due to equipment limitations. In almost all scenarios, there was a marked asymmetry in terms of technology and equipment in favour of conventional forces. Some success in these operations led to the assumption that with the added advantages of hover capability helicopters were relatively invulnerable when compared to fixed wing aircraft.

Rotary wing platforms such as helicopters are additions to the tools of warfare and a further refinement of the heavier-than-air machine concept. Just as World War I ignited the explosive growth of fixed wing aviation, World War II gave the impetus for the development of the helicopter, although its use in that conflict was minimal due to technology constraints. A flying machine with agility, hover capabilities and the ability to operate from small platforms was required and the helicopter appeared to meet these needs. All subsequent conflicts have seen the employment of helicopters in military roles. Korea saw the first induction of helicopters in some numbers in a conventional full-blooded conflict between regular armed forces. Medical evacuation or Casualty Evacuation (Casevac), logistics re-supply, troop deployment on a limited scale because of platform constraints, communications, visual reconnaissance and combat Search and Rescue (SAR) both on land and at sea, were the main roles. These were all combat support roles.

Apart from other roles, insurgencies in Malaya, Kenya, Zimbabwe, French Indo-China and Algeria saw helicopters being used for troop induction into and extraction from combat zones, rudimentary fire support to ground forces and surveillance. Most operations were confined to daytime and in relatively clear weather due to equipment limitations. In almost all scenarios, there was a marked asymmetry in terms of technology and equipment in favour of conventional forces. Some success in these operations led to the assumption that with the added advantages of hover capability helicopters were relatively invulnerable when compared to fixed wing aircraft.

In most of the scenarios in these operations, the insurgent forces did not have ground-based Air Defence (AD) capabilities other than small arms. Helicopters therefore operated in a totally benign environment with no air threat whatsoever. An exception was when the French in the Dien Bien Phu valley in North West Vietnam drew the North Vietnamese into a pitched battle with the aim of destroying them with superior firepower. The Viet Cong accepted the challenge and overran French defenses ending the latter’s military involvement in this part of the world. Let alone helicopters, fixed wing aircraft could not operate effectively in close air support or resupply roles against the AD artillery of the Viet Cong.

US military action in Vietnam saw helicopters playing a more active role in combat as air-to-ground weapon delivery platforms. Over North Vietnam with deployed radar controlled AD artillery and Surface-to-Air Missiles (SAMs) plus fast jet interceptors, offensive helicopter operations were not carried out. Combat SAR and raids by Special Forces in relatively low threat areas were the limit of heli-borne operations. Over South Vietnam in a more benign threat environment with no air threats and ground based AD confined to infantry weapons and light Anti-Aircraft (AA) guns, helicopter gunships began to be used for area suppression and close air support. The concept of the Airmobile Division with nearly 450 helicopters became a reality. This gave ground forces commanders an unprecedented degree of mobility and combat flexibility. The caveat was that the air threat to helicopter operations had to be virtually eliminated and the ground-based AD environment had to be suppressed. Night operations were also undertaken. The US and allies lost over 5,000 helicopters. Most combat losses were due to ground fire from relatively small calibre weapons. The ability to fly slow, hover and loiter had a flipside in that it increased vulnerability. By virtue of its design itself, the helicopter is more vulnerable to enemy fire. It is pertinent to mention that barring the SAM systems in the North, no precision guided weapons were deployed by the North Vietnamese or the Viet Cong. 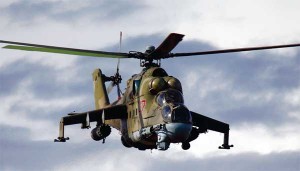 During the Soviet involvement in Afghanistan, the first dedicated Soviet gunship, the armed and armoured Mi-24, was deployed along with armed Mi-8 troop transports. Opposing them were light automatic, medium and heavy machine guns, Rocket Propelled Grenades (RPGs) and some captured Soviet light AD gun systems with no radar target tracking capability. Subsequently, Stinger Infrared (IR) SAMs were used by the Afghan insurgents. Soviet helicopter losses were around 350, majority to unguided guns and RPGs. This conflict again revealed the vulnerability of even armoured helicopters to ground fire from relatively unsophisticated low-caliber unguided weapons.

During the Soviet involvement in Afghanistan, the first dedicated Soviet gunship, the Mi-24, was deployed…

The 1973 Yom Kippur conflict saw the Arabs deploying sophisticated SAM systems to provide an umbrella of protection to their ground forces engaged in offensive action. The Israelis used fixed-wing fast jet aircraft extensively in the close air support role with air strikes being preferred over artillery. Attack helicopters were considered too vulnerable. The Arab SAM defensive shield provided protection as planned for a limited period against Israeli air strikes and took a heavy toll on Israeli aircraft. Unlike in the 1967 war, the Israelis were not able to fully neutralise the ground-based AD systems of their opponents in the expected timeframe. The difficulty in suppressing sophisticated ground based AD systems and their lethality even against fast jets was a lesson learned at high cost. Helicopter survivability in such a situation would have been far worse. Subsequent use of attack helicopters by the Israelis in Gaza and Lebanon has been in areas where the AD environment has been under total Israeli control.

Faced with the threat of numerically superior armour exercising a first strike option, NATO planners began to rely on air power to win control of the air over the battlefield and then attack enemy armour with ground attack fixed-wing aircraft and helicopters in order to blunt their advance and buy time. The problem in the NATO context was in the mission.

At low levels in daytime at gun firing ranges almost every weapon on the battlefield could be brought to bear on the aircraft or helicopter and no amount of armour plating could protect against such volumes of fire. Soviet armoured formations were very heavy with SAM assets and radar controlled rapid-firing AA guns. While the lethality of aircraft and helicopter weapons were not in doubt, the survivability of the launch platforms was the issue. These doubts and the emergence of stand-off PGMs and night target acquisition systems resulted in changes to the concept of operations to stand-off weapons delivery from medium altitudes by day and night till such time as ground-based AD capabilities were significantly degraded. The concepts were never validated in combat between forces with comparable AD systems. Special operations, troop deployment, communications & control posts, Casevac and logistics resupply were support roles ideally suited for helicopters in the Cold War era.

One thought on “Employment of Rotary Wing Platforms in Battle”